On a Monday evening, we owned two elderly but very dependable vehicles… a small car and truck that we had bought new and paid cash for. Our plan was to keep both vehicles for as long as possible… and to keep them so well maintained and so well cared for that they would stay in good condition for a long, long time. Everything had gone pretty much according to plan… except for the rust. The road crews spread salt generously on the roads here in winter, and this salt causes serious rusting problems and makes vehicle maintenance an almost never ending battle… but on that Monday evening, it was a battle that we thought we were still winning. 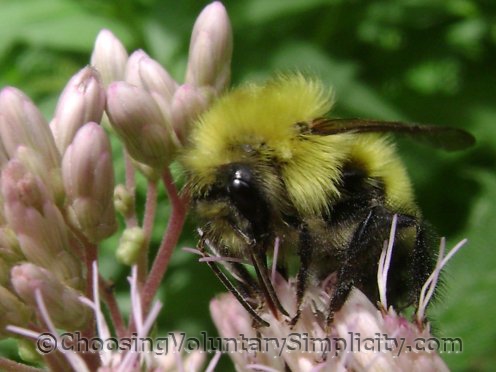 That very next morning… Tuesday… our small truck suddenly would not start. It didn’t take long for my husband to figure out that the alternator had seized and would have to be replaced… but that should have been an easy fix. Since the truck was due for its yearly state inspection in just a couple of weeks, we decided to have the underside of the truck checked over thoroughly at the same time the alternator was being replaced. The previous fall we had asked the same mechanic to make a similar check and he had enthusiastically reported that our old truck was still in great shape. Unfortunately, this new check showed that this time there was nothing to be enthusiastic about. Another winter’s worth of road salt had finally won… much to everyone’s surprise (and the mechanic was as surprised as we were), a large area of the truck’s frame that had looked perfectly fine only a few months before now had rusted almost completely through in three separate places. Despite the diligent maintenance that had kept this truck looking almost like a new vehicle, and running like one too, the amount of damage the rust had done to the frame, the mechanic told us, now made any further repairs a dangerous option.

So by Tuesday night, the loss of the truck had left us only with our remaining vehicle… my wonderful, no problems small car that had always given us such great mileage. Rust had been a problem with this car too, but with yearly body work it was still a shiny, snazzy little car that looked almost as new as the day we had bought it. We had already decided that when we had to retire one of the vehicles, we would not buy another second car again… with our current lifestyle, one vehicle is really all we need.

After the unexpected news about so much sudden frame damage on the truck, both my husband and I thought it would be a good idea to have the car frame checked over thoroughly too, even though the car had also gotten a good report last fall. And incredibly, the mechanic discovered almost the same thing again, only the damage to the frame this time was in the back. Again the issue was decided for us… because safety had suddenly become a serious consideration.

Then it was Wednesday morning of that same week and we had gone from two vehicles to no vehicles at all. We borrowed my mother’s car and spent most of the rest of the week looking for new transportation. We knew we wanted a vehicle with good mileage and that it had to be sturdy and large enough to bring home appliances, lumber, and all the other stuff we always seem to be transporting… and because this would now be our only vehicle, another truck couldn’t really be an option. We were very surprised to discover that the most fuel efficient new vehicles had gas mileage estimates that were considerably less than the great gas mileage we had always gotten with our older vehicles. Our search eventually extended to car dealerships within a two hundred mile radius but we were finding nothing like what we were looking for. Then, just at the point when we were seriously wondering what we were going to do, we stopped at one final dealership and found “our” new car… after that, everything just sort of fell into place. The salesman was so laid back he let us test drive the new car for most of one afternoon and waved us off for the test drive without even asking for a name. When he realized that we would be paying cash for the car he cut nearly an additional two thousand dollars off the already great discounted price we had previously negotiated. Two days later we had a car again.

Financially we came out way ahead by buying the car and truck new, keeping them well maintained, and driving them for as long as we did. The costs of maintenance and repairs were always insignificant compared to what monthly payments would have been. As the car and truck aged, we also saved big on insurance and registration fees. And although we never expected that we would lose both vehicles within a span of two days, the experience wasn’t the major catastrophe it could have been because we were prepared for it… and those years without the normal vehicle expenses had enabled us to channel that money into an emergency fund to be used for the purchase of another vehicle when the time came. Having enough money available to pay cash for the new vehicle gave us negotiating power and made losing the car and truck at the same time less of a crisis and more of an unfortunate event that we were able to cope with and comfortably handle. We’re hoping it will be a while before this new vehicle will need any major repairs or body work, but by keeping it well maintained and looking good, it too should last for a number of years.

We are not alone. According to statistics, Americans are keeping the same vehicle for longer and longer periods of time, and the average age of the cars currently on the road is now more than nine years. Our two vehicles had even longer lifespans… twelve years plus for the truck and an amazing twenty-five years for my little car. Hopefully our new vehicle will be as dependable and will grow old as gracefully as they did.

But… just in case, and because we like to be prepared for anything that might happen, we’re already building up another vehicle emergency fund.

Thankfully salt causing rust is not a problem here, we don’t get any snow lol

Thank you for sharing your life with us and for showing that things are not always wonderful and for telling of your new car adventure!

The story on new cars over here is similar: all the dealerships are offering hefty discounts (25% plus) and factories are on reduced working. It is tough to see people in that industry suffering, but the waste of changing vehicles every two years was a scandal.

We’ve just had to replace our work vehicle. The new van isn’t actully new of course – we’d never afford that – but it has reduced the average age of our little fleet from 13.5 years to 4.5. And there are some good deals to be had if you don’t need financing.

To add another experience, my car is 17 years old and runs extremely well. I bouth it brand new and take a good care of him. I expect to keep it for another 2 years!

What can you do if you are married and your spouse is a spender and you’re not and you crave this simple, happy way of life, and he just wants to buy more and more and sses nothing wrong with it. Is there anyway to make him understand. Everyday there is something new added to his list of wants. We can’t talk unless it involves the phrase, I want to buy, in it. What can I do?

I can relate to this. I’ve found over and over that keeping my 17 year old truck has been better financially than any other vehicle option. (I bought it from my dad a few years ago). I have the same issues with rust unfortunately and the body is looking pretty sad.
This morning I found a crack in the windshield, just got laid off, and am not quite debt-free yet so there is no emergency fund to fix every little problem that comes up.
I’m praying that this vehicle will last until I get a new job, and I’m fairly sure that it wil …