Home » How To's & General Information » All About Salt

Table salt comes from salt mines. It is fine-grained and usually contains calcium silicate or some other anti-caking agent to help it flow freely. Some table salt also contains iodine. Table salt is 99% sodium chloride.

Sea salt is produced when seawater is evaporated. Supposedly there is a subtle difference in taste between salts from diferent areas, and sea salt is often named for the sea from which it is produced. Sea salt contains 95% to 98% sodium chloride and 2% to 5% trace minerals.

Pickling salt has a fine grain like table salt, but it does not contain any of the anti-caking agents or iodine, because these ingredients would make the pickling brine cloudy. 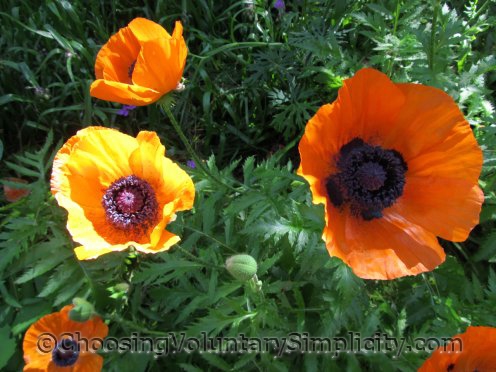 A patch of volunteer poppies at the edge of our meadow

There Are Only Two Ways To Live Your Life