I think the most discouraging allergic reactions are the ones that seem to come out of nowhere… those times when you KNOW you haven’t ingested the allergen and yet the seriousness of your reaction proves you have. For me, the explanation is usually allergen cross contamination I didn’t know about. Recently I have noticed that many natural foods… including many previously “safe” foods that I have been buying for years… are now including a possible cross contamination warning on their label. As the customer service representative at one major manufacturer told me, the “possible” part of the warning is somewhat misleading… if an allergen is listed as a possible contaminant on the label, it is almost certainly in the product, albeit in small amounts. Anyone with a severe or life-threatening allergy will undoubtedly choose to avoid the product rather than test out the accuracy of the statement! I’m grateful when manufacturers give me that choice. 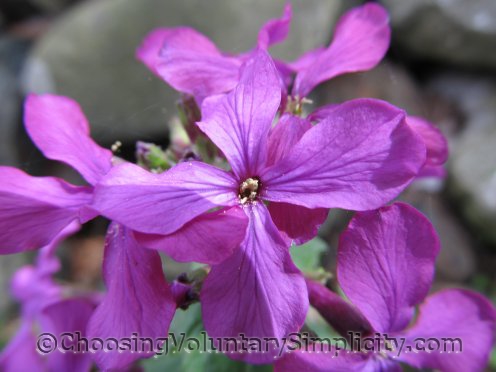 So how about the natural foods sold in the bulk bins? I had thought buying in large quantities in unopened boxes or bags might be the solution to some foods that have now become off-limits for me… and that the boxes and bags would be required to have appropriate warnings if there was any chance of cross contamination. I made some telephone calls and eventually talked to Matt, the head of the bulk food department for a large grocery store about a forty-five minute drive from here. He wanted to be helpful but told me he had very little information about their bulk foods because the distributors buy the bulk foods at auction according to price. He said he wanted to stress that the distributors and the stores have no idea where these foods come from, what conditions they were grown in, or how they are processed… and they also have no information about possible cross contamination. His recommendation to anyone having a serious allergy was to not buy the bulk foods.

I also talked to Mary, the nutritionist on staff for this particular store. She too wanted to be helpful. She told me that her area of expertise was celiac disease but she was gathering information about other allergens as well. She said there is reason for concern about cross contamination of food in the bulk bins and accidental airborne allergens in that general area, and she has already posted signs at both entrances of the bulk food section warning people who have celiac disease to stay away from that part of the store just because of the airborne wheat dust. She said that flours are particularly problematic… each time someone scoops flour (soy, wheat, etc.) out of a bin, some of that flour will become airborne and eventually settle on the other bins. She also said that someone is always going to disregard the instructions of using a different scoop for each product and use the soy flour scoop to scoop up beans… resulting in more cross contamination.

I didn’t get the answers I wanted, but I was impressed by how eager both of these employees were to learn more about soy allergies… although I was surprised that neither of them had any idea that there were so many names for soy and soy derivatives. When Mary asked me if I could give her some examples, I read off my list of possible soy aliases and suggested she go out into the main store, pick food products off the shelves at random, and see for herself how much soy is being put in our food. She called me back a few hours later and said she had a lot of work to do… that she definitely would be adding warnings, advice, and tips for avoiding soy to the same type of information she had already posted for the other allergens.

It will be interesting to see if she follows through.

Hostas I Have Grown From Seed

After reading this article I think I now know why I keep having gluten reaction even when I haven’t eaten anything with gluten in it. Thanks for another great post.

A grocery store with a nutritionist on staff? That’s a great idea. I wish there was someone like that in my area because I was recently diagnosed with several different food allergies and I am having a very hard time coming up with a diet that I can live with that doesn’t cause me problems. Until I read this article I hadn’t even thought of cross contamination in the store as a possible problem. Thank you for bringing this to my attention. This is a great blog!

I wish the people at our store were as conscienscious and responsible but unfortunately they aren’t. I once asked if they could put up a sign asking people not to use the same scoop for different bins but they have never done that. My youngest son is allergic to soy and I have found your information very helpful.

I know for me, I have had reactions to foods that I thought were “safe”, and I do buy out of the bulk bins, so I can back and forth between not doing it, and doing it for convenience. It will be interesting to see if she follows through!

They have bulk bins at my local co-op organic store. A few years ago when I first started shopping there they did not have allergy warnings on the bulk bins but now they do. I went there recently looking for safe nuts as I need more zinc in my diet and cashews contain zinc. I was hoping for pre-packaged nuts but I did glance at the bulk bins out of curiosity and that’s when I saw the allergy warnings. It seems all of the stuff – dry pasta, nuts, seeds, flours, etc – is processed on the same machinery so its all cross-contaminated with soy. They had actual soy nuts and soy flour in some of the bins. I asked one store employee if they had nuts in bags and he started to drag me towards the bulk bins. I told him that was not an option as it’s all contaminated with soy and he didn’t even know they were selling soy. Maybe he was a new employee…I don’t know. He did not know about the warnings, either.

I know beef and spinach are good sources of zinc, but I can’t eat that every day due to the high histamine in both. I would get a histamine reaction and that can be just as bad as a soy reaction except its more heart-related reaction. And the nuts in the baking isle of supermarkets have those warnings on them.

I would not trust anything out of bulk bins. The same goes for websites that sell stuff in bulk. I think there is at least one site that does that but I forgot its name. I have had this soy allergy for about 6 years now and the few recent reactions I had all have been due to cross-contamination. Last one I had was back in November due to raw chicken being contaminated with who-knows-what. It was probably some form of soy but I’ll never know.