Home » Simply Personal » Can You Break a Piece of Spaghetti into Only Two Pieces? 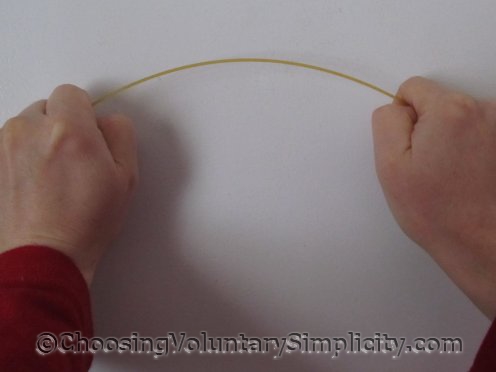 Hold one end in each hand and bend until spaghetti breaks

I was cooking spaghetti, and my youngest son was telling me about the French scientists who won an apparently well-deserved Ig Nobel Prize for improbable research in physics a few years back. Their conclusions were published in a scientific journal with the title “Fragmentation of Rods by Cascading Cracks: Why Spaghetti Does Not Break in Half.” In case you’re wondering, they discovered that when a piece of spaghetti is bent past a point, it does break, but this causes a “flexural wave” to travel down the two pieces, which causes the pieces to curve even more and break into other pieces. Supposedly a piece of spaghetti will usually break into three or more pieces… the two long end pieces being held and smaller pieces breaking from the middle.

Of course everyone here had to try it, and for a few minutes we had spaghetti pieces flying all over the place. And the spaghetti was breaking into three, four, or even more pieces, but without exception always breaking into more than two… just like the study concluded.

Except for me. Using the exact same technique everyone else was using… holding a piece of spaghetti with both hands and curving it until it broke… I was consistently breaking spaghetti into equal halves. No matter how many pieces I broke… and that number was a little embarrassing :o) because I kept thinking that the next piece would do what it was supposed to do… I always ended up with only two broken pieces of spaghetti, and both of these pieces were always almost exactly equal in length. I wonder why…

Try it… can YOU break a piece of spaghetti into only two pieces?

A Downside to Our Rural Life

This is so weird. We had to try it after I read your post and none of us (husband, mother in law, daughter, and me) could break the spaghetti into only 2 pieces. It proved what you said about spaghetti flying. Those little pieces move with force. This was a very interesting post and a cute challenge. We had fun with it.

One of my students found this post and my class had an impromptu experiment right away. Every student broke spaghetti and it was 100% for more than two pieces. I’m sure a lot of their families will be trying this tonight. The kids were pretty excited and wanted me to tell you they had tried the experiment and to thank you for the fun idea!

I’m checking in to tell you the same thing happened to me. I broke the spaghetti into almost two exact pieces 7 times out of 10. The other times there were multiple pieces shooting off into space. I read your blog regularly but this is the first time I have commented. Thank you for a very interesting and informative read.