Our last electric bill was for $270.19. Of that amount, $116.57 was for charges that have been recently added to the monthly bills with no explanation either on the bill or on the company web site:

And finally, $153.62 was for the actual electricity we used that month. Or at least, that is what the bill said. We knew we had actually used a whole lot less because we had been experimenting with ways to lower our energy usage, and we have been reading our meter every day ourselves. When we asked about the incorrect energy usage figures on the bill, the woman in their customer service department reluctantly admitted that the meter reader had not bothered to read our meter that month, and that the electric company had “estimated” the amount of power they thought we would use. 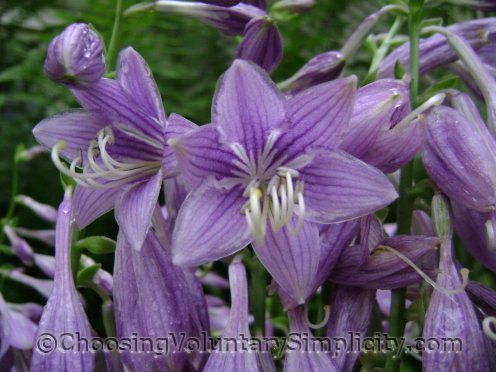 More of my hostas in bloom

Our electric company is an energy co-op and it is the only electric option we have available to us. Including the monthly service charge and all of those other charges that are part of every bill, we pay roughly 19¢ per kilowatt hour. That is nearly double the national average.

We have been steadily reducing our energy consumption for several years now, and we have already cut energy usage in other ways as much as we can, I think, without drastically changing the way we want to live. We have energy efficient appliances and turn lights, televisions, etc., off if they’re not in use. We have to run several computers because of our work, but they are all Energy Star compliant and go into low-power sleep mode if they’re not actually being used. We have three freezers, but we keep them full. We test our captive-air water tank regularly to keep the air pressure at the right level so our well pump isn’t starting any more often than it needs to. We use ceiling fans instead of air conditioning… I don’t think there are many more changes we are willing to make.

It’s always a trade-off between convenience and conserving energy. As with every other aspect of simple living, there is a threshold… a point beyond which we’re not willing to go. Despite the extra work and inconvenience, it was almost fun finding out how much energy we could save just by fully utilizing the wood stove, and we will probably do many of the same things another winter, but it also helped that we knew there would be an end to the experiment.

How to Make Chocolate Pudding From Scratch

Make Your Own Citrus-Scented Disinfectant Spray

One possible solution to cooking in summer is the solar oven. I disdained them as hokey at first, but then bought a commercially american made one for my emergency stores during hurricane season. I tried it out and fell in love. It works a lot like a crockpot, slow cooker or roaster depending on the containers you use and the angles. It was really easy to use and best of all…no added heat to the house in summer! There are loads of plans online if you want to try it as a do it yourself test, but the manufactured ones are quite sturdy and not too expensive if you find that you like them. Just a thought for you. :)

Given the cost of a KW hour and that an electric dryer runs on 220, I’m motivated enough to use my outdoor clothesline in warmer weather and hang laundry inside to dry during the winter. Actually, I enjoy getting outside on a nice day and putting my duds in orderly rows to flap in the breeze. How the clothes are hung does matter. Nice, windy spring day in the forecast and laundry in the washer now. Tomorrow, I’m taking feather beds to the laundrymat (won’t fit in a home machine) and getting them cleaned up.

One of the tricks I learned by accident, being too lazy one evening to bring in the laundry and leaving it on the line overnight, is that the dew dampens the clothes enough that when they re-dry, the weight of the water pulls out most if not all of the wrinkles. I experimented one day when I was laundering some 100% white cotton curtains and hosed them down after I got them on the line. Hot day, dried fast and not any wrinkles that mattered. Using half the recommended amount of fabric softener seems to be sufficient to prevent stiffness in the fabric. For items like those cotton curtains where a little starch helps, liquid starch added to the rinse cycle works great.

I invested the money in power strips/surge protectors and am making a point of cutting off all computer equipment, printers, TVs and other electricals at the power source when not in use. How much of a difference it makes, haven’t calculated it all but it’s worthwhile to me. I actually feel good shutting down the technology and calling it a day instead of feeling tied to it. After working from home which I don’t do anymore, breaking the habit of spending hours of day in this office chair and doing something less sedentary feels great.

As my brother says, the older I get, the more I remind him of Grandma Mary, who had her clothesline and a very simple lifestyle. We had a big discussion at dinner last night about how life is so complicated today and how Granny had the right ideas. She had no telephone, no car, a small one bedroom house, kept possessions to the things she only really, really needed, no stockpiles of stuff, hand-washed much of her laundry, and really didn’t get into commercialism all that much. I’m thinking that is something to emulate. I do draw the line at the washboard and ironing socks, sheets, towels and everything that is capable of being ironed, even if Granny was compulsive about ironing.

I’m also seeing how much happier my mother is now that she downsized her lifestyle. Older people realize their resourses are limited and adapt. I took her out grocery shopping and observed how everything going into her cart was thought out in advance so her money went further and food was not wasted.

I’m also trying to solve the mystery of the high electrical bill at my house. I really envy you that wood stove. Maybe what I save not using that dryer and not spending money on “I wannas” will eventually allow me to buy and install one of my own.

I love hanging my stuff on the line! People probably think I’m crazy, but I even have a system. It works well for me anyway, and saves us some cost on electricity. I can’t wait for it to be warm enough here in New England for me to start doing that again!!

Just a thought for saving on electricity through out the year is solar panels. Not just the passive solar panels that heat water, which would still be great in the very least. But the other ones, which I can tell you the names my husband’s the electrician, that actually harness the solar energy for use in your home. Either that or it sends it into the grid and you get electric credit for it. My old chemistry teacher from high school has them all over his roof in OH. He says that some months he even gets a check from the electric company because he puts in more than he uses. How about that. I have some other friends in the Northeast Kingdom, VT who are off the grid completely. I’m pretty sure they have solar panels and have a propane tank for when it’s necessary. They house is completely off the grid!! How would that be, completely self sustaining! That’s my goal!