I had never heard of hasselback potatoes until I watched them being made on an Irish cooking show. They’re crisp on the outside, tender on the inside, and flavored however you want… plain with just herbs and bread crumbs, or with any topping you choose… bacon, ham, cheese, and sour cream are just a few possibilities.

Hasselback potatoes can be made with any type of potato but I prefer russets. The potatoes can be peeled or unpeeled. I usually peel the potatoes I buy at the store, but I don’t peel the potatoes we grow ourselves. If you do peel the potatoes, put them in cold water so they won’t discolor, but be sure the potatoes are dry before adding toppings or baking. An oven temperature of around 400°F works well, and the potato edges will brown more readily if they are basted with additional oil or butter throughout the baking process. The slices will fan out like an accordion as the potato bakes.

It can be somewhat difficult to cut the thin slices into the potato without cutting the slices all the way to the potato bottom. This becomes easier if chopsticks or something similar are placed on both sides of the potato as a barrier as you cut almost to the bottom but leaving the last 1/4-inch of the potato uncut. I don’t own chopsticks, so I use the handles of two butter knives, and these work well too. Smaller potatoes can be placed in a large cooking spoon and the edges of the spoon become the barrier for your knife as you cut. 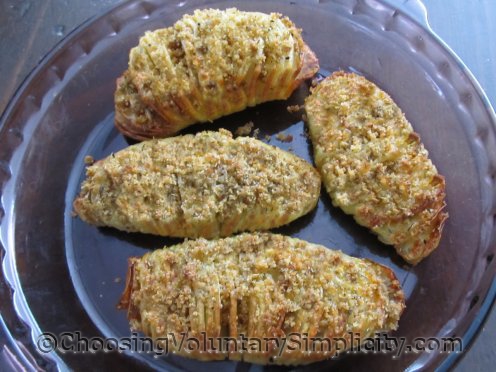 So far I have only made hasselback potatoes using the method shown on the Irish cooking show… the potatoes were rubbed with butter and topped with a simple combination of bread crumbs and rosemary, salt, and pepper (only I use olive oil instead of the butter). The other toppings would be difficult… we don’t eat bacon, we don’t eat ham, and recently we haven’t been eating dairy products because of the soy transference, so that eliminates the cheese and the sour cream. I would guess we will probably just try some different herb combinations.

Unless anyone has some other delicious non-soy topping ideas…?

Can You Help Me Identify This Hosta?

These look really yummy! I will try them. I’m a huge fan of your blog. I find the most interesting ideas here. Kudos to you!

I make hasselback potatoes sometimes. Have you tried basting them with chicken stock? It makes the bottom part of the potato soft and the top crispy. Pretty good combination actually and adds some added flavor if you can’t use alot of the toppings.

Have you tried nutritional yeast? It has a cheesy flavour without the dairy. We use it a lot on popcorn – even to top off a pizza. We’re allergic too so I understand the restrictions. Wouldn’t it be nice just once to be able to eat anything that looked good?