Home » Cooking & Baking from Scratch / Reader Questions » How Do I Tell When Bread Dough Has Risen Enough?

Reader question… “I know I’m supposed to let bread dough rise until it is double in size, but how do I tell when that has happened? Do I weigh the dough before and after or is a visual thing that you sort of guess at? I hope this doesn’t sound like a dumb question but I have tried making bread and I thought it had doubled but it didn’t turn out very well. I really want to learn how to make good bread and I don’t know what I am doing wrong. Help please!” –Sharon T. 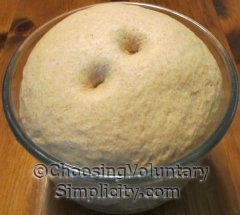 Actually, there is a very easy way to tell when your bread dough has risen enough. When it looks like the dough has doubled, just use your fingers to make an indentation about one-half inch into the dough. If the indentation remains, the dough is ready for the next step. If the indentation disappears, the dough needs more rising time. Make the same test when you have the shaped dough rising in the pan just before baking. When you think it has risen enough, use your finger to make a SMALL dent in the dough near the side of the pan. If the dent remains, the bread is ready to bake.

Don’t get discouraged if your first loaves of bread aren’t perfect. Bread making is a skill that requires practice. Once you’re more familiar with the process and can recognize each stage of the dough, you will find that bread making is really easy.

How To Make Your Own Apple Pie Spice Mix

This is thing that has worried me about baking bread from the beginning. I want to be able to do it without a bread machine, but that whole “doubled in size” thing threw me for a loop!

I just jumped onto this site to re-read this tip – sometimes my bread has a sour scent and now I know to trust my dough and not always follow the cook book’s timing. I’ve learned a lot from this site, and it is extremely gratifying to watch my little girls punch down the dough as we learn together. Thank you!

Thanks for all your easy to understand tip’s and advise. I often find the answer I’ve been lookin for on your site written in a way that is easy for me to understand. Baking is something new to me but thanks to you I feel that I am learning the basics and can now figure out if something goes wrong. Everything makes more sense to me now.

Your picture of finger dent in dough was better than a thousand words. Thanks. Mrs Page

I must be a very lacksidasical bread maker because I have never wondered if my bread has risen enough. I just sort of guess, even at the very beginning, all those years ago when I first started making my own bread. I’ve never had any major disasters and even if I am a bit biased (!) I think my bread is quite good. But don’t ever ask me to make croissants. I have managed that successfully only once. Every subsequent time the resulting croissants could have done good service as horse shoes!

Thank you for the picture with finger indentation. I did it on side of bread and it was perfect. I had a question about letting dough rise. Like. Where is the best place to set it? I couldn’t find answer. Being winter I sat my bread pans on floor heat registers and it worked perfectly. Left it sit for 50 minutes. I hate shape of bread machine bread and the hole from blade. I did use my bread machine to knead dough and let it rise. I just used the dough setting. Thanks.