How I Make Rivels, Couscous Size

This recipe for rivels comes from one of my mother’s wonderful recipe scrapbooks. I have written about these books before… they are simple three-ring binders with pages of plain notebook paper, and the first entries date back to shortly after my mother was married. Some of the recipes were cut from magazines or newspapers and pasted on the pages… others are handwritten by the person who gave her the recipe or by my mother herself. I especially enjoy the notes and comments my mother had made in the margins of each recipe… and the variety of information she had in these books. 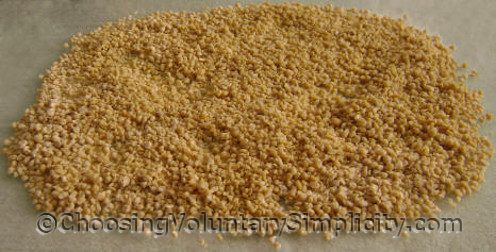 Couscous-size rivels spread out to dry

But back to the recipe for rivels… this was one of the earlier entries, and my mother wrote that she had no idea who gave her the recipe. I would guess that whoever it was made rivels regularly because this recipe is so brief and unspecific:

“Here’s how rivels are made. Make a pile of flour on your bread board, then make a well. Break an egg in the well. Beat with a fork and use as much flour as the egg will absorb. Make a soft ball (not sticky) then grate. Sprinkle gratings on bread board to dry a little so they won’t stick together when dropped in hot milk or broth.”

Rivels make delicious soup noodles. They are also easy and quick to make. When I made two batches of rivels yesterday, the whole process literally took only a few minutes. I used to make rivels by hand as described in the recipe above, mixing the eggs into the flour with a fork until I had a soft ball of dough. Now I use the food processor (my favorite small appliance) using approximately two cups of flour, two eggs, and a pinch of salt for each batch. I pulse the salt, flour, and eggs until a soft ball is formed, then I work the dough with my fingers or a fork until the mixture becomes crumbly. Sometimes, depending on the size of the eggs, type of flour, etc., it is necessary to add a small amount of additional flour into the dough before it will crumble nicely. I have seen recipes specifying making the “lumps” the size of small peas, popcorn, or cherry pits… but we prefer smaller, couscous-size rivels. All rivels will become slightly larger once they are cooked.

In most recipes rivels are made and immediately cooked, but I spread the little “lumps” out on my cutting board to dry for a few hours or even overnight. This drying time completely prevents the rivels from clumping when they are cooked.

So what kind of soup did I make with the rivels? That’s another post!

But of Little Things…

My grandma made something similar, but mixed the flour and egg in a shallow bowl and scraped the dough off the edge into the pot of soup/water. Made little dumpling type things. She’d put them with wilted cabbage and bacon and something else. I sure wish I could remember that recipe. It sure was good. Thanks for the memory.

You have inspired me to try making the cous cous size noodles. I make rivels but they’re bigger, more the size of marbles I guess. My kids really like them instead of noodles in chicken noodle soup. Thankx for all the great info here. I’m a regular visitor.

Now you’ve got me remembering the homemade chicken soup my Mom used to make that she put her homemade noodles in, except I realize now by reading your article that they weren’t noodles, they were rivels. She used to make this soup a couple of times a month, and I sure did enjoy it. I haven’t had rivels since I left home. It doesn’t sound too hard, maybe I should give it a try?

This sounds like something my grandma used to make except I thought she called them reebles. I googled the word reebles and didn’t come up with anything though. I wonder if it was a misspelling from whenever she first copied the recipe and she really meant rivels. Anyways thanks for the reminder. I’m going to make some reebles!

Thanks so much! My husband had said his grandpa used to make rivels, but he couldn’t remember how it was done. I had never heard of them. Thanks to you, we’re feasting today on homemade potato soup with rivels and chicken.

My mom and grandmother used to make rivels and I carried on with the tradition. We used them in potato soup and in blackberry cobbler. Love them

Thanks so much for a wonderful recipe! I make a chicken soup with rivels a couple of days ago from a magazine with poor instructions! It was good, but I know yours will be better. I’m making an oxtail soup right now and I’m going to use your rivel instructions. Thank you so much!

What your grandma made sounds a lot like spaetzle. I have a special “grater” for making spaetzle that makes making the little dough bits a lot easier. It’s so easy, I don’t know why I don’t make it more often.