How To Make a GMO Free Light Corn Syrup Substitute

I have had this recipe for some time but had never tried it until last Christmas when I wanted to make some divinity fudge and couldn’t find any commercial corn syrup that was GMO free. I was pleasantly surprised at the results… the substitute is the same consistency as corn syrup, it looks like corn syrup, and it certainly works like purchased corn syrup in the divinity fudge recipe, and also in a nut brittle recipe that is another one of our favorites. I almost never use corn syrup, but when it’s a necessary recipe ingredient, it’s good to know there is such a satisfactory GMO free alternative. 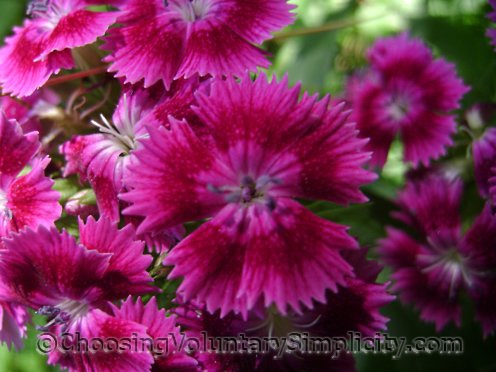 Combine all the ingredients in a heavy sauce pan and stir until the sugar is completely dissolved. Use a damp paper towel or pastry brush to remove any sugar crystals from the side of the pan. Bring to a boil over medium heat. Reduce the heat, cover the pan, and simmer for three minutes. Remove the cover and continue to cook the sugar syrup until it reaches a temperature between 232°F and 240°F. This is called the “soft ball stage” and will happen fairly quickly.

Remove the pan from the heat and let the syrup cool. My directions say that this recipe will make nearly two cups of syrup and that the syrup will keep at room temperature for nearly two months.

Note: After the initial THOROUGH stirring, it is important NOT to stir the sugar mixture or to get any sugar crystals on the sides of the pan, because even one sugar crystal can cause the syrup to crystallize.

A Road Less Traveled By

How to Make Chocolate Pudding From Scratch

Thanks for this! My real annoyance with corn syrup is that I cannot buy it without vanilla flavor added. I will absolutely have to give this a test run asap!

What a wonderful idea and something i will definitely try. I don’t use much corn syrup either but we also make a nut brittle that has to be made with corn syrup. I haven’t made it for a couple of years. Now I can.

AWESOME!!! I just made corn syrup! It was easy and it looks like the stuff in the bottle. Next I’m going to make that lucious looking divinity fudge. Thank you so much for sharing these wonderful ideas and so much of your life. I love this blog.

It’s funny because I was wondering if corn syrup was something that was possible to make. I wanted to make a pecan pie last week and didn’t because I didn’t want to use commercial corn syrup. My husband will thank you for being responsible for him getting his pecan pie back.

Thank you I can now make popcorn balls for holloween. I could not find corn syrup without GMOs in it.

Well, SusannaP, it isn’t actually corn syrup. It’s more like a light treacle–made from sugar cane, not corn, but not molasses (dark treacle), either. It’s a different creature from corn syrup. Real corn syrup is made from sweet corn.

My mother used to make this syrup from sugar when I was a kid. Sometimes she would add some maple flavor to it, but most of the time, we ate it in pancakes “as is”. I always liked its taste better than corn syrup. We just called it “sugar syrup” for obvious reasons.

I always used Karo light corn syrup for Divinity, but with the coming of the insidious GMO corn, I stopped using corn syrup and just didn’t make anything that called for corn syrup. I wasn’t sure if sugar syrup would work for Divinity.

Divinity made right is tricky in one respect: You have to follow the recipe exactly. Any deviation, and it doesn’t come together the way it should. If made right, it is light and fluffy. I always made it in balls, like the Divinity that we bought at the “five and dime” (aka 5 and 10 cent store, or “dime store”) when I was a kid. Back then they had candy counters in the dime stores, with fresh candy–including all kinds of chocolates, roasted nuts, and freshly made popcorn. The Divinity was sinfully delicious! Being in the South, the Divinity sold here had chopped pecans in it. Up north probably walnuts. Real Divinity melts in your mouth like a snowflake and is akin to eating a cloud–very soft, very fluffy, and a delicious sweetness far bigger than the size of the candy! I think we got half a dozen pieces for 10-15 cents–and they were not small pieces, either. AHHH! The good ol’ days!

Thanks, gave to Mom… Needed for Caramel