How To Make Sweet Pickles One Jar At A Time

Reader question… “I am wondering if you have a recipe for sweet pickles that I can make and keep in the refrigerator like with your dill pickle recipe. I don’t have storage space to store regular processed pickles and only my hubby and me to eat them anyway, but he would be over the moon if I could surprise him with homemade sweet pickles to go along with the dills.” –Abby L.

All you need is a combination of sugar and vinegar, some spices, and whatever you want to pickle. Cucumbers fresh from the garden are best, of course, but store-bought English cucumbers and Kirby cucumbers still make better pickles than any you can buy. (Kirby cucumbers are the short, narrow cucumbers that are sold four or five to a package, and like English cucumbers they have fairly small seeds, which is what you want for a cucumber pickle.) The pickles in this photograph are some I made last winter from an English cucumber. The seeds were a little larger than I would have liked but the pickles were still delicious. 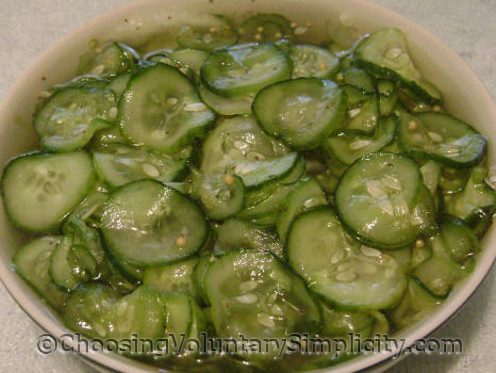 I don’t really have a recipe, but this is the procedure I use. I slice the onions and cucumbers thinly, sprinkle them with kosher salt, and refrigerate them overnight. The next day I cover the cucumbers and onions with cold water, stir them around quickly, and drain immediately in a colander for at least two hours. I don’t add any additional salt to the pickling mixture.

After the cucumbers have drained, I pack them in a jar. This is the time to add any additional spices or bits of garlic, pieces of hot or sweet peppers, or even celery slices… whatever you like.

I make the pickling liquid using a ratio of one part vinegar and one and a half or two parts sugar. I have found that for one large jar of pickles, one cup of vinegar and one and a half or two cups of sugar is usually just the right amount, but if your jar is smaller or larger, it is easy to make adjustments using the same ratio. I prefer to use ordinary cider vinegar and white sugar, and I almost always add one tablespoon of celery seeds and one tablespoon of mustard seeds. I boil the pickling liquid for at least ten minutes and then let it cool COMPLETELY before adding it to the jar. (This method came from an old recipe that called for a cold pickling liquid, which I think helps to preserve the lovely green color of the cucumbers. However, I think a hot pickling liquid makes a crisper pickle. Both methods work well.)

The final step is to pour in the pickling liquid, making sure that all the would-be pickles are completely covered. And of course, store your jar of pickles in the refrigerator. It will take a week or two for the full flavor to develop.

The pickles in this photograph were made with thinly-sliced cucumbers and onions, the pickling liquid I described above, and one scant tablespoon of dried mustard. This, I think, is my favorite combination.

What Is A Home?

Still Hanging In There

I really appreciate this. I make your dill pickles and they are delicious but I too was wanting a sweet pickle recipe. BTW I also appreciate that your recipes are so easy to follow. I’m not much of a cook but I think I’ve made all of your recipes and I have never had a failure. I think my partner likes your blog (because of the great recipes) almost as much as I do.

Those pickles look great! I can’t wait to try this recipe, maybe for Thanksgiving if I can wait until then. Thanks for such great articles, I love your blog and read it all the time.

Yet another great post. I am so glad I have found a kindred spirit.

I received a recipe from a friend that is very similar to this, but it says to pour the liquid over the cucumbers right off the heat, while still hot. I’m not sure why. My recipe is for a “cucumber salad”. I am going to try these, as I have cucumbers galore, and plenty of quart Mason jars to fill. Right after I make salsa, because I also have tomatoes galore! But first I’m going to reread your post on “That Sense of Balance”…

Anna, sometimes I make the pickles this way too… pouring the boiling liquid over the cucumbers makes the pickles very, very crisp.

Wish you had an easy sweet pickle recipe for green tomatoes! I have tons of them and even though they will ripen if wrapped in newspaper and stored in a dark spot, I sure would like to use up some of these green beauties. Any suggestions?