Reader question… “I’ve noticed that a lot of recipes list pumpkin pie spice mix as an ingredient. I almost bought a jar of it when I was grocery shopping but I don’t think I will be using it very much, it was expensive, and I wondered was it something I could make myself. I already make your Italian Seasoning mix. Would you perhaps have a recipe for making pumpkin pie spice?” –Lilith P.

I have also noticed that many newer recipes are listing pumpkin pie spice as an ingredient instead of so many individual spices… and yes, it is a very easy spice mix to make. Most of the commercial pumpkin pie spice mixes are just a blend of cinnamon, ginger, nutmeg, and allspice. Many add a sulfiting agent as a preservative and to retain color. 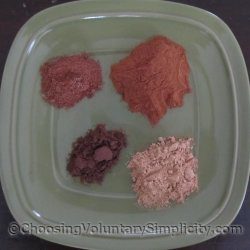 These are the amounts I use:

Mix thoroughly. This makes 4 teaspoons of the pumpkin pie spice mix, which is usually more than enough for any recipe. I store any excess in a washed and labeled recycled spice jar. The blend will keep (AND without any sulfiting agents!) as long as the individual spices would, but if you want to make a smaller amount, use a 1/4 teaspoon or a 1/8 teaspoon as your base measurement.

Our Austrian Mushroom-Hunting Friend Has Survived Another Year

A Stove By Any Other Name

I made some of this and it’s great. You wouldn’t happen to know how to make apple pie spice would you?

Thank you for answering my question and for the great recipe. I have already made this and used it and I had great results. I too would like the apple pie spice recipe if you have one.