Home » Doing It Ourselves » How We Extend Our Short Growing Season

We really have to work around our short growing season here. If we wait to set out seedlings until all danger of frost is past… and this can be as late as the first two weeks of June… we end up with too late a start on the garden because we can also get frosts on the other end of the growing season as early as late August. Covering plants to protect them gets old very quickly, we have found, especially when you have a lot of plants to protect, like we do. Traditional cold frames never seemed like a practical idea for us either. We needed something that offered frost protection on a large scale, could be left in place without having to be adjusted, and most important of all, something that was really inexpensive. Our solution… “cold frames” made with one-by-one supports instead of solid wood and heavy duty woven blue tarps instead of glass! 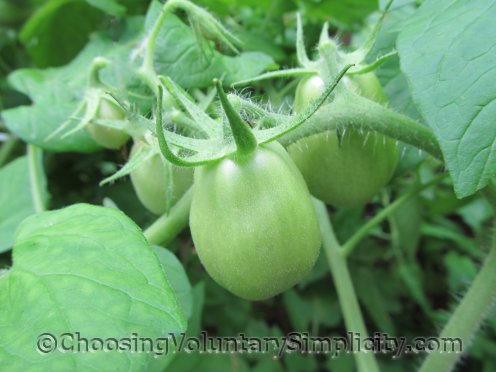 We discovered how well these frames worked for this purpose quite by accident one year when an exceptionally cold period, complete with heavy hail, was predicted for our area. We had just transplanted nearly two hundred small hosta seedlings into one garden a few days before, and we needed to come up with something that would protect them from the expected hail. We ended up using tarps (the woven kind, NOT plastic) and wooden frames to keep the weight of the cloth off the hostas. We fastened sections of tarp to the top of the frames and along two sides, but we left the tarp on the other two sides unfastened but long enough to reach the ground. By fastening a long, heavy, wooden cleat to the bottom edges to serve as a weight, the frame could be closed in for protection… but lifting the cleats to the top of the frame would leave opposite sides open so air could flow through.

We made the frames with a slanting front so the rain (and hail) would drain off. I don’t remember the dimensions of those first impromptu frames, but we would have adapted the traditional cold frame idea of a six to nine inch slope for a four-foot frame and nine to twelve inch slope for a six-foot frame. We made these first frames strictly to protect the hostas from the hail and realized only afterward that this type of shelter would also let air and filtered light through to the plants and protect the young seedlings from the harsh sun. These first frames and the plants under them suffered no damage despite the really large hail, and since more cold weather was predicted, we ended up leaving the cold frames in place for several more weeks. The hostas continued to thrive.

The next spring we decided to make taller frames for our tomato seedlings, and we have used them ever since. We can usually get the tomato seedlings transplanted in mid-May, and with the protection from the sun and wind we don’t even bother to harden off the seedlings any more. The tomato seedlings just get planted in their permanent positions in the garden… we put the cold frames over them and leave them in place until all danger of frost is gone. On the nights when frost is predicted, we lower the end cleats to the ground to give the plants full protection.

My husband cut two-by-fours to make the one-by-one supports for the frames, and we use the same supports and tarp sections every year. My husband uses screws to assemble the supports and fastens the tarps to the supports with thin cleats and screws. When we no longer need the frames, he takes them apart, and the pieces are easily stored for another year.

Obviously the bees don’t mind using the side ventilation openings to get to the plants. Most years we already have blossoms and a few small tomatoes forming on the plants before most people in this area are starting to set out their transplants.

With An Open And Grateful Heart

What a great creative idea! We’re working on expanding our garden this year. I’ll have to pass your ideas onto my husband. He’s the handy builder in our family.

I love this idea. I live in BC; rather high up, and most summers we can have a ten degree difference in day to night temp. I want to try this to see if I can get some squash plants to keep their fruit this year. One question-are the woven drop cloths made of canvas or a lighter material. All I can find locally are the plastic or canvas ones. Thanks.

Simone, the ones we use are a mix of fabric and something (I think)… they aren’t strictly fabric, but they aren’t plastic either. They have a woven surface and around here at least they’re sold in all the box stores. I don’t think the material matters all that much. We have used canvas too but that is usually more expensive.

We live in New Brunswick and also have a very short growing season. Have been trying to think of how we can get started sooner. Your solution sounds like what I had envisioned to try. Love your blog. Thanks for your hard work.