We lost several of our beautiful big pine trees during an ice storm when the weight of two days of freezing rain literally broke off the tops of the trees. One especially large tree (actually, three trees that had at some time grown together) at the edge of one of our gardens was totally destroyed and had to be cut down, leaving an enormous (and ugly) stump that was easily eight feet across. We have removed a lot of smaller stumps, but probably nothing larger than three or four feet in diameter. Removing a stump this large without specialized machinery seemed somewhat physically impossible, but we decided to give it a try. 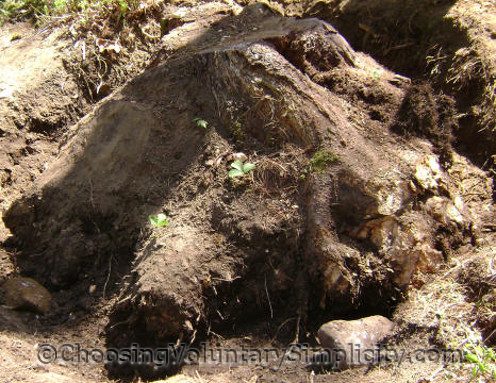 First my husband dug a trench all around the stump to a depth of about two and a half feet. Each time a new root was exposed, we cut through the root close to the stump. Because our soil is so rocky, digging the trench also involved digging up and removing a number of fairly large rocks that were wedged in around the roots, and much of that digging had to be done with a hand trowel, but eventually the tree stump had a deep trench all around it and all of the exposed roots had been severed. After cutting a few more roots that were growing from out of the bottom of the stump, the stump was free. It was, however, way too heavy to be moved… even with our small tractor pulling, the stump wouldn’t budge. The next logical step seemed to be to lessen the weight of the stump by cutting off portions from the sides. When each cut became too deep for the saw, a wedge and sledge hammer helped a lot, but it was still a very slow process. 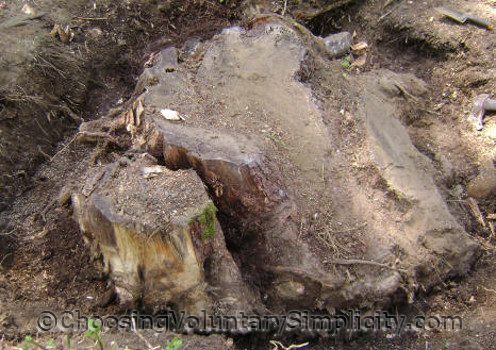 Finally, after the stump’s diameter had been reduced by about half and it could be rocked slightly in its hole, we decided to try moving it again. My husband estimated that the stump’s weight had been reduced to about five or six hundred pounds, which is the maximum limit for the hand truck we have, so he used nylon rope to lash the stump to the hand truck… enlisted the help of two other men… and after several unsuccessful attempts, the three of them were able to pull the hand truck over into an upright position, which effectively hauled the stump out of the hole. For a few anxious minutes, it looked like the stump was still too heavy for only three men and a hand truck to handle, but with a combination of pushing and pulling, they eventually managed to move the stump away from the garden and into an open area where my husband can now cut it into even smaller pieces. 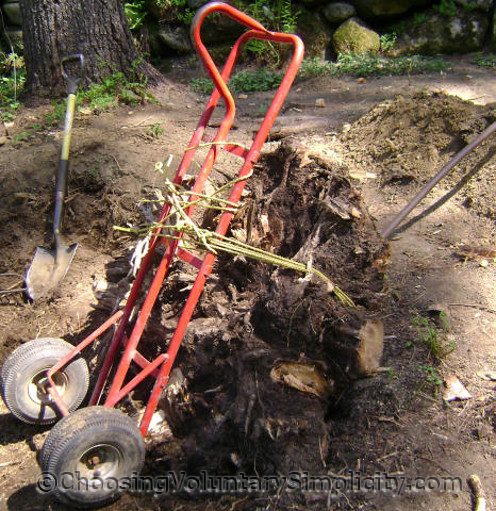 A professional tree service would not have dug up the stump and its roots, but instead would have ground the stump into small chips with a special machine called a stump grinder that grinds downward through the top of the stump. In our area, the price for this service is a three dollar charge for each inch of the stump’s diameter, with the stump measurements being taken at soil level. Since our stump exceeded eight feet in diameter, the cost for the grinding would have been at least two hundred and eighty eight dollars. Removing the grinding debris, we were told, is a labor-intensive and time-consuming process which doubles the grinding fee… so the total cost of having this stump professionally removed would have been five hundred and seventy six dollars, and all of the outreaching roots would still be left in the soil! Not that we would have ever actually paid that much to have a stump removed, but it’s still satisfying to know that our two days of digging the trench, removing rocks and cutting and pulling out roots… and lots of physical exertion and sweat…. represented such a huge do-it-yourself savings.

Written by Shirley Filed Under: Doing It Ourselves, Sensible Frugality, Simple Living

Wow. I know that took alot of work. We cut down with an ax and chainsaw many (about 30) of our oaks and pines when we first moved here. They were varying sizes but it was digging up the stumps that was a doozie. Many of the tress had and intricate root system that had been cultivated over years.

I would hope that we never have to deal with tree cutting or stump pulling again. EVER…

That’s exactly how I do it, though I haven’t ever tackled such a LARGE stump! But it works, you just have to have faith, resolve, and KEEP DIGGING AND CUTTING.

My family has removed some medium-sized trees by digging a deep trench around them, even deeper on one side, so that a chain could be looped around the root ball and underneath it. Then pulling with the tractor breaks out the roots on the bottom. I’m not sure that method would have worked at all for you, though, given the larger size and likely deeper rooting from that stump.

I cut my tree about 7 feet from the soil thereby giving me leverage. Next I dug around it some guys use a power washer and cut as many roots as I could. Next I saturated the soil with water then rocked it back and forth with the truck exposing more roots to cut. Finally it was dragged out and dumped. AM

Or you could just plant a pretty vine to cover the stump and save your back! I used to work like a mule, too and now I’m paying the price. It’s even prettier if you cut the tree off at ten or fifteen feet and plant a climbing vine. This also provides great wildlife habitat. Another option is to build your campfires on that spot which will eventually burn out the stump.

And here I thought I was the only crazy person in the world! I just spent about three weeks digging out a huge stump from a 35-year old flowering cherry tree. I didn’t use any power tools — just a shovel, an axe, a digging bar, a mattock, and an old saw. (It’s a lot cheaper than joining a gym, and the exercise is just as good.) I finally got it out of the hole using a 4 by 4 and rope as a lever.

Another option is to drill holes all over it, pound in some wooden dowels that have been inoculated with edible mushroom mycelium and let the mushrooms turn that stump into food and compost! Yeah, it’ll take a while, but if it’s a stump that’s not in the way, could be a good way to handle it and you could get a nice crop of edible fungi a couple of times a year until the stump has been used up.

TJH, I love this idea, but unfortunately these trees were all pines so that wouldn’t have been possible.

The easiest way I’ve found was to remove a stump is to cover the stump or as much as possible with a bag or 2 of charcoal and let the charcoal (bag and all) simmer overnight or until the charcoal has all burned away. Since the charcoal is packed and held in the bag the coals will last much longer than as if the coals were spread out thus allowing more air to circulate.

Or how about building a raised bed around and over a big stump, let the soil microbes do their work while you raise vegies or flowers over and around it.

Wow. You guys are all amazing! Shirley, you deserve a medal, Stacy, you’re my hero — I can’t WAIT to try the charcoal method, you genius. AM, the power washer idea is wonderful, and THJ, the edible mushroom mycelium tip is fab. To think, I was just outside trying to move a large rock with a crowbar and some bricks for a fulcrum — Hallelujah, you guys make me feel normal. Yeah, the rock is kind of winning, but I have T I M E and I’m 5’2″ and obstinate. Muwahahaha.

Digging out the neighbors pine tree stump. About 3 feet by 2 feet on top. Dug around the stump over half way, leaving the rest of the roots for support for cutting the roots under the tree. Also do not want the stump to come down on anyone. removed as much dirt as i could so i could cut of the root up to the stump so a person can dig under the stump. then the next step will be to cut the roots under the tree. The the last step will be to cut the remaining half that were not cut at the beginning. Project at 70 plus years of age is average of 1 hour a day for about 20 days. With all roots removed then you can pull the stump out of the hole.

Well done Shirley and thanks for sharing it.
That is what I was going to do, slowly but surely bit by bit, but searching if there is a better way. Now I know that it can be done that way… like what the other say, good exercise and satisfying result.
I don’t think I can use fire as it will be annoying my neighbours. The idea of planting mushroom is interesting. However, unsure where you live, I live in a suburb of South Western Australia and I have to remove it as soon as possible to prevent termite infestation . I will also attempt to remove as much root as possible.