Home » Simply Personal » I Have a Confession to Make

I have never even tasted the green bean casserole that seems to be a staple for many holiday dinner menus. Actually, I have never even seen this casserole “in person,” just in magazine photographs and on television cooking shows. In my extended family the vegetables for Thanksgiving dinner were always more likely to be coleslaw, boiled onions, and squash!

So have I missed out on something delicious? The most common green bean casserole recipe out there seems to be the original 1955 recipe created by the Campbell Soup Company… now on display in the National Inventors Hall of Fame in Akron, Ohio, by the way… which includes green beans, condensed cream of mushroom soup, milk, black pepper, and French fried onion rings. The soup contains soy… I’m not sure about the French fried onion rings, but they probably do too and would be off-limits for us… but I could make homemade versions that would be soy-free.

My question is, does this combination of ingredients taste better than it sounds? I can only think that it must or this casserole wouldn’t be so popular.

Is green bean casserole a part of your holiday dinner? Should I give it a try? 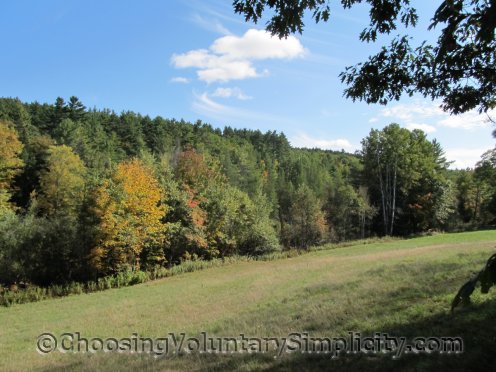 The field next to our house

I’m Sure There’s a Story in There Somewhere

How To Make Teddy Bear Rolls

Buttons, Buttons, Who’s Got the Buttons?

it is indeed very good….i’m not sure why because the ingredients are nothing special in and of themselves but combined they do make a statement! it is a Thanksgiving staple at our house.

Its never been part of ours … I honestly don’t think I’ve tasted more than a bite of it … and I don’t care for it. (shudder) LOL!

The green bean casserole does taste good, but that doesn’t mean I’d recommend putting a lot of effort into recreating it.

Lots of old comfort foods taste good, but aren’t all that healthy and this would be one of those. This recipe tastes good to me mainly because it is comfort food but I no longer cook in that style in my daily life and wouldn’t be all that interested in a new casserole with similar cooking methods and characteristics because, generally, my tastes have changed over the years.

Yuck…. I have seen this dish at many pot lucks and holiday parties… it doesn’t appeal in the least…. give me steamed green beans with fresh butter. When I think of condensed soup and french fried somethings…

I’m with Ester. I’ve had green bean casserole before, lots, but now I prefer to steam my green beans crisp, served with butter. Why mess with a good, natural, thing?

Well, it is really good, if you like fattening junky-type food. It can be made healthier for you, with ingredients from scratch, etc., but you really aren’t missing much. What you usually have sounds good, too.

Sounds a lot like a casserole my grandma taught me to make 40 years ago. You take a pound of hamburger and brown it and drain it. Put it in a casserole dish. Dump in a can of green beans and spread a can of cream of something soup over that. Then totally cover the top with tater tots. Bake it about an hour 350 oven. It is easy… tasted ok – made it so much we burned out on it though.

Ewww. This was on some Aunt’s holiday table, along with creamed peas . . . It has never been on my table. I prefer my vegetables to be vegetables, not casseroles!

Its good, but its not out of this world. I don’t know why its so popular! You should try it once though…

If you don’t each condensed soup I don’t think you’d like it. I used to like it when I ate a lot of processed food, but now even the thought repulses me. Really, you’re not missing anything. Plus what you make from scratch has so much more love put into it. It makes a difference. Keep to what you and your family knows and like. Green Bean Casserole shouldn’t be on that list.

mmm…comfort food. Canned green beans with a can of cream of mushrooms soup, some milk to make it creamy, and loads of Frenchs fried onions mixed in and on top.

Then there is also macaroni and cheese. I never knew until I was an adult that mac and cheese was not red. In my family the recipe has tomato sauce in it. You layer elbows, tomato sauce from the little cans, and yellow american cheese. Fill a casserole dish with layers until full, top with cheese, and pour in 1 cup of milk. Bake covered until bubbly, and then remove the cover to burn the edges of the cheese. mmmmm

I eat raw milk, grass fed beef and pork, pastured chickens and I love love love my green bean casserole. It just doesn’t taste the same if it is made with frozen green beans….or with a ‘healthy’ condensed soup. I think you should try it.

I never had them until I moved to the U.S. – my stepson loves them.
It’s relatively simple to make but you must like the taste of mushroom soup. The fried onions on top make it crispy and crunchy. It’s good to try at least once but you’re not missing out on much.

Forget the onions – it’s the tater tots… those were popular in the days before McDonald’s was on EVERY corner – had to have something kind of quick and easy to throw together. Probably not much difference as far as which is healthy. Just don’t forget to drain the beans.

My son and I don’t like it at all.

However, it was a staple with every holiday meal in my hubby’s family and he loves it. I make it for him at Christmas. :)

You either love it or you hate it! I love it and it doesn’t quite seem a holiday dinner to me without it. I rarely deviate from the original campbells ingredients (although I use generic soups). We usually only have it for a holiday meal so for a few times a year the unhealthiness is okay with me.

New to this blog, but just had to comment on this one….
YUK! It was not something my family ever ate when I was a child. We prefer our veggies simply adorned…butter….and maybe salt depending on the veggie, and somewhat crisp.

That being said, my husband’s family had it EVERY holiday….and in between. Come to think of it, they eat few veggies without them being fried or swimming in something. The other must-have holiday dish from his family is broccoli rice casserole. They even had it at the same meal!! I don’t like it either. Luckily his tastes have expanded over the years! ;)

Whatever you decide, Happy Thanksgiving!

IMO, it’s not gourmet food but it’s not bad. Other people seem to love it and expect to see it on the holiday table. I’d say you should always try something new if it can be made w/o soy. You never know…you might love it.
My green bean caserole is just a can of mushroom soup, green beans, black pepper and the onion crunchies sprinkled on top. But I also serve a plain steamed veggie such as asparagus as a healthier alternative.

This is better:
Saute a sliced large red onion in a tablespoon or two of olive oil, turning to coat all the pieces. Sprinkle with a teaspoon of sugar and cook, stirring occasionally, on medium to medium-low until the onions are just starting to get brown (caramelize). This can take 20 minutes because if you cook them on too high a heat, they will burn. Add a little salt and pepper and then mix them with a pound of cooked green beans.

…anything with green beans (especially canned ones), has got to be totally revolting. …and yes, I have tasted the green bean casserole, I stand by my opinion.

It looks worse than it tastes but its very good. So give it a try and if you can find the mushroom soup without the soy go for it.

I’ve never cared for the traditional recipe, but I found one last year that I really liked. Now…if I could remember where I found it and what I did with it!

Green bean casserole is not my favorite… like Esther and Jules I tend to prefer green beans that are still crisp. :) The flavor profile of green beans in a mushroom/milk sauce is pretty similar to a pot pie or shepherds pie (so you can imagine that flavor with added salt and fat from the french onions). I think it may work as part of a Thanksgiving dinner because people are eating it with other foods (like turkey and potatoes) where the whole meal is providing the contrast… like a deconstructed pot pie.