Home » Simply Personal » It’s So Cold Out There!

It’s So Cold Out There!

Suddenly it feels like winter. After a relatively warm fall, we’re now into cold, windy days and temperatures that almost never rise above freezing. It’s great soup weather… so guess what we had for supper last night?

I never make a certain potato soup without thinking about my father, because this was one of the few soups he actually liked. My mother told me that in the early years of their marriage my father made this soup often… in fact, he was the one who introduced her to the recipe. This was amazing news to me, because I don’t remember ever seeing my father cook anything, but I do remember how much he liked this soup. 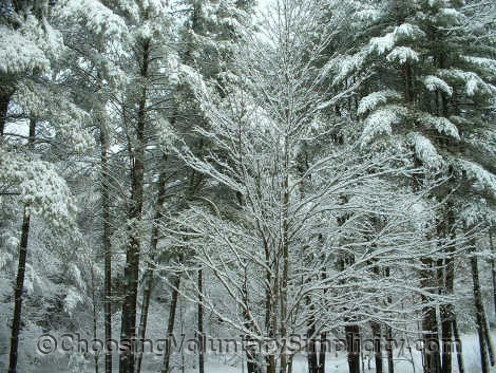 We have always called this soup just “potato soup,” and my family loves it. I suppose it is really more of a corn chowder because we do not puree it. Last night I mixed in grated cheese and pieces of turkey ham and made a quick batch of biscuits and a green salad to go with it.

The scene is that photograph looks *sooooo* cold! I can only guess how cold, because I have never actually seen any snow. I’ve always dreamed of visiting somewhere where you have lots of snow, but haven’t managed that so far. I don’t think I would like to *live* in snow, though. Anyways, I just wanted to say that is a lovely picture. It really gets the feeling across.

Do you have a recipe for your potato soup that you would share?

The potato soup is a post I’ve been intending to do. The problem is that whenever I make the soup I don’t remember to take photographs. Hopefully soon…

There’s nothing quite like a warm fire and the smell of simmering soup to make a house seem like a home. We live in snow country too and I always think that winter is the coziest of times.