A few days ago we discovered that this year the feed store was selling seed potatoes. They had about fifteen types to choose from, and all were supposedly suited to growing well in this area. I don’t know how their price compares to seed potatoes in other areas, but this was the only local source and the price seemed reasonable… seventy-nine cents a pound for any of the potato types. We bought twenty pounds of russets. I read somewhere that you can expect a crop of approximately ten pounds of potatoes for every pound of seed potatoes planted… so will we end up with around two hundred pounds of potatoes to dig? Probably not… but it will be fun to find out. 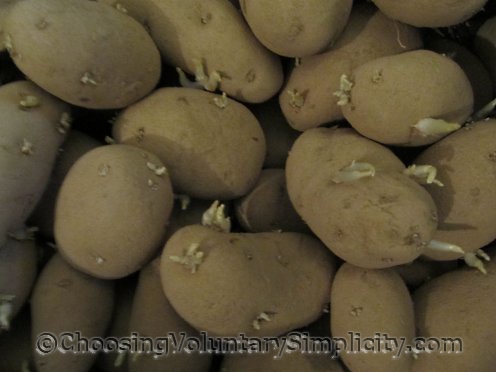 This is the first time we have bought seed potatoes, although we have grown potatoes for the last two years. Previously we have always just saved and planted potatoes that had developed eyes… and yes, I do know that planting potatoes from the grocery store isn’t supposed to be a good thing to do, although it has worked great for us. Both years we ended up with unexpectedly huge crops. Our only reason for buying seed potatoes this year was because we haven’t found any potatoes with eyes.

The man at the feed store said that the seed potatoes should be planted within the next couple of weeks, so we will probably plant them this weekend. For various reasons beyond our control we have always planted potatoes much later than we should have, so it will be interesting to see if an earlier planting will yield an even bigger crop.

I suppose we should cut at least some of the larger potatoes into pieces… and somehow in the next couple of days we’ve got to come up with new planting areas.

And that will almost certainly involve digging up lots of big rocks!

Written by Shirley Filed Under: My Country Gardens, Simple Living

Russets are my favorites too. The ones I don’t like are the yellow flesh potatoes. I can never understand when people say they taste ‘buttery’. Just because something is yellow doesn’t make it taste buttery in my opinion! Wishing you the same impressive results with this years potatoes.

Our potatoes are in too. Ours are starting to show some green but we live in zone 6 and I can plant earlier than you can. This year I planted several varieties including an heirloom blue that seemed interesting. I dig furrows and deeper than most and this works well in our warmer weather. Really enjoy your writings. Thanks for all the time you put in to this blog. It shows.

We will be planting our potatoes this next weekend. Could have planted sooner but the soil was still too wet. I believe the same thing happened to us that happened to you Shirley – neighbors cut off a great proportion of the big trees surrounding our property and now our property has a problem with water that I would guess previously was taken up by the trees. This change has been catastrophic to our well established gardens.

I think potatoes have to be the most miraculous of all plants, the way more potatoes develop from a single potato or even just a piece of potato. It is really quite a wonder. Wishing you a H-U-G-E crop of potatoes!!!!

Around here Good Friday is when to plant potatoes. Of course, that changes from year to year, so take it for what it’s worth.

My vines are a good 12″ tall right now. I planted 60′, or about 8lbs of seed potatoes. It’s more of a science experiment than anything. Will I eat them all before they rot in the basement?

Rob, our potatoes are planted but you are way ahead of us with those twelve-inch tall plants. The weather isn’t very obliging here… we’re still getting rain almost every day and mostly the temperatures are still in the high forties… not really good gardening weather yet.