One of the most difficult things about living with a food allergy (aside from the allergic reactions themselves) is not being able to eat a lot of the foods that other people take for granted. For example, what about a cookout, where everybody is eating grilled hot dogs and hamburgers. If you’re lucky enough to have found (or made) wheat meat hot dogs or hot dogs without added soy, what happens when… because of the soy allergy… you can’t eat the hot dog bun? A hot dog or a hamburger eaten alone or on a slice of bread just doesn’t seem like cookout food.

And that’s why I really appreciate being able to make my own hot dog and hamburger buns. They’re completely soy-free, of course, but they’re extra delicious too… I have it on very good authority (everyone who has tasted them) that these buns are much, much tastier than commercially made buns. Wheat meat hot dogs are only an occasional “indulgence” for us, but I do make these buns a lot because they’re also wonderful for subs or other “fancy” sandwiches. 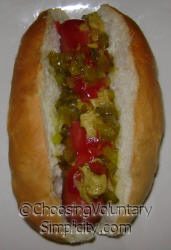 Warm the milk. Add the salt, butter, and two tablespoons of the brown sugar and stir until the butter has melted. Let cool to 110°F. Combine the warm water and yeast and the remaining one tablespoon of the sugar. Stir well and let stand until foamy (about ten minutes). Using a large mixing bowl and an electric mixer, beat the egg, then beat in the yeast and milk/butter mixture. Add about four cups of the flour (a bit at a time) while the mixer is running and beat until the batter is thick and elastic. At this point knead in as much more flour by hand as necessary. Continue kneading the dough until it is very elastic. Form the dough into a ball, place in a greased bowl, cover, and let rise until doubled (forty-five minutes to one hour). Punch down the dough and let the dough rise until it has doubled again (about thirty minutes this time). Turn the dough out onto a lightly floured board and knead for several minutes. Form the dough into a ball and let it rest for about ten minutes. Or… you can let your bread machine do the work up until this point… just be sure to let the dough rise twice.

Cut the ball of dough in half and refrigerate one half to prevent it from rising while you are shaping the rolls. For hot dog buns, I divide each ball of dough into twelve pieces and roll each piece into a shape about five inches long and nearly two inches wide. After rising and baking, this is a good size for most hot dogs. Place the rolls one-half inch apart in rows on a greased baking sheet with an inch between each row. Let rise until doubled. Bake at 375°F for approximately twenty minutes and brush the tops with melted butter.

For hamburger buns, roll the dough one-half inch thick and cut into rounds. For medium-sized buns, a 2 1/2-inch biscuit cutter or a canning jar lid is a good size. Place the rounds of dough on a lightly greased baking sheet about one inch apart. Cover with a towel and let rise until doubled. Preheat the oven to 375°F and bake for approximately twenty minutes. Brush the tops of the buns with melted butter and cover with a towel.

I often cut this recipe in half if I want to make only a few buns… or I make the full recipe and freeze the extras… these buns freeze wonderfully. Yield: full recipe, about twenty-four buns.

Hard Boiled Eggs… in the Oven?

These look fantastic! I’m going to have to give them a try, letting the bread machine do the first part for the first couple of tries.

Question – When I’ve made rolls in the past and used something as a “cutter”, they always tend to rise and come out of the oven with one side much higher than the other. Any idea why or what it is I might be doing wrong? I don’t have the problem when I shape them by hand…….

Kadeeae, the only thing I can think of is that you might be rolling the dough out so that one side is slightly thicker than another. I have a tendency to do that myself, and that is really why I find it easier to shape them by hand.

Going to try this recipe this week…..looks great. My wife has struggled wth a soy allergy for the last 5 or so years and also is miffed when she can’t enjoy a hamburger or hotdog on a regular bun. So maybe this is the answer……..my question is about baking after the freezing, should they thaw and then bake or just put them right in from the freezer?

Phil, I would definitely bake the buns before freezing them. I let them thaw on the counter in the bag I froze them in… then I steam them in a covered colander over a pan with a small quantity of boiling water. If you want to put the buns on the grill or toast them, I would just let them thaw first and then do whatever you would do with purchased buns. We like the buns lightly steamed, just enough to warm them up but not enough to make them soggy. Toasted or grilled is good too, though.

I just tried this recipe for the first time last week and I loved it! The buns smelled so good when they came out of the oven that I had a hot dog that night, even though it was a bit late and I wasn’t really hungry. *grin*

Anyway, I am wondering if you’ve ever tried freezing the dough before baking. I’m single, and even halving the recipe is way too much for me to eat before they go bad. And I don’t particularly like frozen, baked bread–I find it crumbles too easily and doesn’t taste as good.

Thanks again for your blog and for sharing your delicious recipes!

I freeze bread dough all the time. It’s super simple :)

Just mix up the batch and shape it into portion size balls. Line a cookie sheet with wax paper, place the dough balls on it with a 1/2 to 1 inch space between them. Freeze dough on the pans until hard. After the dough is frozen solid I keep it in gallon ziplock bags.

When you want to bake them, pull the dough out in the morning, place in a pan, cover with a towel and let them sit in a warmish area until they are thawed and have risen. At this point you can reshape your dough. Then bake as usual.

Or, you can use the fast thaw method. Preheat your oven to 250 degrees. Place a pan on the bottom rack and fill with 1 inch of boiling water. Turn your oven off and put a pan of rolls in. The dough should be thawed and ready to bake in 1.5-2 hours. Don’t forget to take the pan of water out of the oven before baking or your rolls won’t brown as well.

You mentioned making wheat meat hot dogs. I’m wondering if you make them and if you do if this is a recipe you would be willing to share? I have used this recipe and the buns are fantastic. We like them for a veggie sandwich piled high.

Virginia, I’m still working on this one. I have tried several recipes and none of them result in quite the taste we are looking for, so I am still experimenting with herbs and flavors. I think we’re almost there, and yes, when I am pleased with the taste, I will post the recipe.

Hi Shirley,
I just wanted to let you know that I made the hamburger buns today,for the first time. My husband and I both really enjoyed them. I am so happy that I now make homemade yogurt on a regular basis and I can now add homemade hamburger buns as well,thanks to you! God bless you! Katie, in Georgia.

I was so impressed with how these buns turned out. It was surprising to me that they were so light, soft and tasty–AND that I could actually do this so easily. I used the bread machine to make the dough, then just shaped and baked! I make these all the time now. Thank you so much for sharing your recipies! Karen in MN