Proper kneading is one of the most important steps in making bread. Kneading develops the gluten, which gives the dough elasticity by trapping the bubbles of gas formed by the yeast. The result is a bread with an even texture that is not crumbly or dry… bread that falls apart when you slice it has not been kneaded enough.

By the time you reach the stage of kneading the dough, you will have dissolved the yeast in water and mixed in the wet and dry ingredients, including approximately half of the flour. At this point the dough should have only enough flour mixed in so the dough forms a mass in the bottom of the bowl. You will be adding most of the remaining flour as you knead the dough, but remember that the amount of flour needed can vary greatly depending on the type of flour being used and even the amount of humidity in the air. 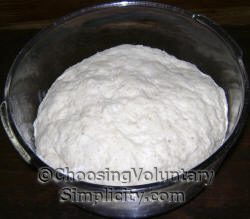 You will need a lightly floured surface at a comfortable height… perhaps a table or countertop. Work just enough additional flour into the mass of dough with your hand until the dough ball can be handled easily. Turn it out onto the floured surface, and using both hands (your fingertips or palms, whatever works for you), push the dough out and fold it in half. Keep folding the dough and pressing it out, turning the dough a quarter turn each time. Repeat this procedure over and over again, adding only a small amount of flour at a time whenever your hands, the dough, or the board become too sticky. Most doughs should be kneaded for at least ten minutes. When the dough has been kneaded enough, it will tell you… it will feel soft and elastic and “alive” under your hands as you knead it. You will begin to see small bubbles forming under the surface of the dough. At this point, form the dough into a rounded shape and place it into a greased bowl to rise. Cover the bowl with a damp cloth and set it in a warm place (around 85°F) until it has doubled in size.

I’ve never seen this idea mentioned anywhere else, but I have found that it is very possible to knead bread in a large bowl. I discovered this by necessity after I injured my back and was no longer able to stand at the counter for long periods of time. I kneaded bread sitting in a comfortable chair with an extra large bowl on my lap, and often as I kneaded, I watched the television news channel or talked to family members, so the kneading time passed quickly and was a quiet respite I actually looked forward to. I followed the same kneading procedure described previously, keeping another small bowl containing the rest of the measured flour nearby to add to the dough as necessary. I especially appreciated the added benefit that I had no floury countertop mess to clean up afterwards.

Corn and Chicken Soup with Rivels

14 Things Unique To Me

Our Other Favorite Banana Nut Bread

Nice tip on the bread fall apart when slicing. But why cover the bowl w/a damp cloth when rising? Never heard that one before.

The damp (not wet, just slightly moist) cloth provides the perfect environment for the dough to rise, and of course it keeps the top of the dough from drying out. The plastic wrap that so many people use nowadays does the same thing, except the damp cloth doesn’t stick to the dough when the dough rises up to touch it like it does to plastic wrap. I have noticed that many of the older bread recipes mention using a damp cloth. I have never really thought about the why… it’s just something I have always done.

Good description – Thanks. However, I have discovered an EASY and QUICK alternative to manual kneading. The “dough” function found on most bread machines (even the $40 cheap model gifted to me) works wonderfully to knead most any bread. You do need to keep a close eye on it the first time you try the recipe, but I use this regularly for everything from whole wheat to sweet breads. I typically don’t leave the bread in the machine the entire time but quit the cycle early and finish the raising in my bread bowl. I adapt the recipe by putting all of the liquid ingredients in first, then adding the dry with the yeast last (just like written in the bread machine recipes).

I’m an Occupational Therapist who works with joint injuries of the hands and upper extremities and kneading dough can be really tough on the body. I would encourage using the knuckles (as if you are “punching” the bread) with the wrist straight to protect the finger joints (arthritis) and wrists (carpal tunnel).

Susan, I agree, bread machines do a fantastic job of kneading bread. However, the oatmeal bread recipe I’ve been making makes three loaves of bread at a time, and it’s too much dough for my bread machine to handle. Also, I really do enjoy kneading and the whole process of making bread “by hand,” but the bread machine is a great alternative for a smaller recipe.

Natalie… Most doughs need to be kneaded by hand for at least ten minutes. The dough will tell you when it has been kneaded enough. Look for small bubbles forming under the surface of the dough and a dough that is soft and elastic and feels “alive.” Usually this happens after about ten minutes of kneading.

Hello, have you ever tried a no-knead bread? This works great. I bake it in a cast Iron dutch oven. It comes out fantastic.

On what kind of surface do you kneed? I tried it on my laminate countertop, and it seems like that would be really dirty. I used to have an unfinished wooden cutting board, but that too didn’t work. The dough got caught on little nicks in the wood. Is it worth it to get some kind of marble/granite board?

Kim, marble or granite would be great, but there are much less expensive boards you could buy too. I have a very large board that is made of smooth glass on one side and textured glass on the other, with corners that keep the board from moving. This board is really a cutting board, I think, but the smooth surface is a wonderful kneading surface, and it washes up quickly. I know some people do knead right on the countertop, but I prefer a board of some sort.

I have kneaded bread in a large stainless steel bowl for years. I prefer it. To maybe explain your damp cloth…Being a commercial baker for years…I had the priviledge of using a proofer. A large warming cabinet set to the right temp and would hold many trays of yeast products. It had a tray of water in the bottom to provide moisture which made the dough rise better. I use the damp cloth when I set my bread to raise also. Just a bit of not so useless knowledge. :)

I loved these comments about bread-making. I’ve tried many methods for making bread, including the no-knead “artisan” breads. But I always go back to my mother’s and my grandmother’s method of long-kneading, and in my opinion this makes the very best and loveliest of breads. I also sometimes knead dough in a very large bowl. I love every step of the bread-making process, and for me the gentle, rhythmic kneading has a calming and relaxing effect that is good for the soul.

Frances, I so agree!