All the political ads out there right now are making me remember something that happened during the last election period, when my husband and I were shopping one day at our “local” Walmart (about an hour’s drive from home). He needed to buy something in electronics and I needed to buy something in housewares, and we were already almost late for an appointment, so we agreed to each go find what we needed and meet up again in a few minutes. We’re a huggy, hand-holding couple, so I was not surprised when a few minutes later my husband came up behind me, put his arm around me, and kissed the back of my head. I WAS surprised when I leaned back against someone who didn’t feel the least bit familiar, and I was absolutely shocked when I quickly turned my head and saw the face of a man I had never seen before, just inches away from my own.

We both stared at each other… he tightened his hold on my arm and said, “I can explain,” but I was so disgusted I just jerked my arm away and got out of there. When I found my husband and told him what had happened, he was as angry as I was that this man had acted in such a familiar manner. What we saw next completely changed the situation. Because this same man was walking toward us, talking earnestly with his arm around a woman who had long hair like mine, and hair the same color as mine, and she was wearing the exact same jacket I was wearing… a tan polar-fleece jacket with darker tan, brown, and blue southwestern designs. She was about the same height and build as I am. It was so clear then what had happened… this man had mistaken me for his wife. 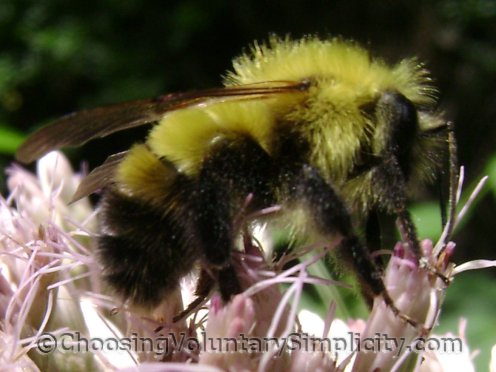 This isn’t the end of this story, though. A few weeks later I was half-listening to the local news, and I recognized one of the voices in the interview as the voice of the man who had hugged me in the store (I have this thing about never forgetting a voice), and it turns out that this man was one of the candidates for state senator! No wonder he and his wife looked so anxious when they saw me coming toward them accompanied by an obviously angry husband… and no wonder they were so relieved when we all looked at each other and at the jackets and hair and laughed at the obvious mistake.

He won the election, by the way, and the next time my husband and I were in Walmart, my husband put his arm around me at one point. Without looking, I leaned back against him and said, “Congratulations on winning the election, Senator…” and we both burst out laughing.

You probably had to be there.

How I Make Garlic Powder

Oh my! This made me laugh out loud! Thank you for sharing.

The posts you write that involve your husband are my favorites. I so envy your relationship. You must have a wonderful marriage.

My! This was too cute! Thanks for the chuckle.

Your relationship with your husband is positively adorable, and ever so admirable. I can see why he’d be so protective when some man would come up and do such things out of the blue.

The odds of it being a poor, gentleman (soon-to-be) senator mistaking you for his darling is just too funny! A terrific re-telling!

Funny! I did something like that around middle school at a public library. I was there with my parents and had been ‘picking’ on my Mom. I found my Dad, slid my hand into his and told him that Mom didn’t like being picked on. Much to my horror, and his, he wasn’t my Dad. I can’t remember being so shocked!!! Who was this strange man??? I frantically searched for my Dad and when I found him, I didn’t let go!!!

This made me laugh for the first time today. Pretty cute. I will have to share this with friends and family.

Since the picture with this story was of a bee, I thought maybe you were going to describe a serious story about “bee activism” (not that there’s anything wrong with that, it’s a very important issue).

Too funny, what a cute story, thanks for sharing!