My Favorite Recipe for Divinity Fudge

The sweet tooth gene skipped a generation with me I think, because I am definitely not a fan of candy in general and fudge in particular. I do, however, like divinity fudge, and we usually make a batch for Christmas each year. My sons used to call it “cloud candy.” This fudge is creamy and light and somehow doesn’t seem as sweet to me as most candy. It’s also very easy to make and is fat and soy free. 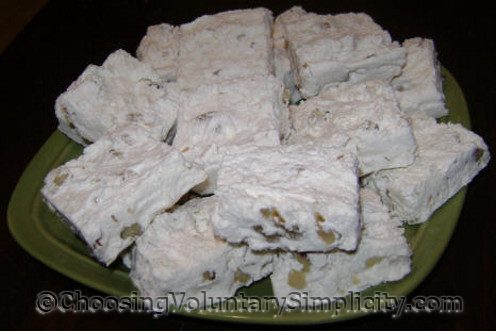 Combine sugar, corn syrup, salt, and water in a heavy sauce pan. Cook over high heat, stirring until the sugar is dissolved. Then continue cooking WITHOUT stirring over medium heat until the syrup reaches 255°F or the “hard ball” stage. Wipe off any sugar crystals as they form on the side of the pan with a dampened paper towel or brush.

Beat the egg whites until they are stiff. Pour the hot syrup directly over the egg whites while continuing to beat the mixture at medium speed. Use a large bowl because the candy mixture will suddenly increase tremendously in volume as the syrup and egg whites combine. Add the vanilla and continue to beat at medium speed until the mixture loses its gloss and a small amount dropped from a spoon holds its shape. Fold in the nuts.

Turn the candy mixture into a lightly buttered 8-inch square pan. Cool until the surface is no longer sticky, then use a sharp knife to cut the candy into pieces. This recipe makes approximately one pound of divinity fudge. It freezes beautifully!

That candy looks delicious. Your sons are right, ‘cloud candy’ is a great name for it. It’s amazing that you really get that entire plate of candy with just 2 egg whites. I always get such wonderful ideas at this blog.

The picture looked so good I made this fudge today. It turned out great but a word to everybody: Heed Shirley’s warning, use a larger bowl than you think you’ll need. I didn’t think it was important so I used a medium-small bowl, and Shirley was right, the mixture increased in volume so much it almost overflowed my bowl! Everything worked out ok but next time I’m going to use a bigger bowl like I should have done in the first place. Thanks Shirley, great recipe and great blog!

What a beautiful plate of candy – it looks good enough to eat!! The photo and the description remind me of a candy my grandmother always used to make at Christmas when I was little. I don’t think she called it divinity candy but I can’t remember what she actually did call it. I don’t know how she made it and when I asked my mother she said she didn’t know either. Maybe I’ll try this recipe and see if I can recapture a little bit of my childhood! Anyway thanks for making me remember something I hadn’t thought about for a long long time.

I actually tried a recipe for divinity fudge a couple of years ago and it failed miserably. It was very discouraging. I didn’t know then (and don’t know now) what I did wrong and I don’t think I even have that recipe any more but after reading through your instructions they seem much more straight forward and easy to follow and I think I might actually be able to do it this time. Wish me luck! By the way I love the blog, sometimes I spend hours here reading the articles.

I’ll be very interested in your post with the recipe for the corn syrup substitute. I am very concerned about the encroachment of GMOs on our food supply and have stopped using most corn products because the manufacturers can’t (or won’t) tell me what kind of corn they’re using. But this year that has kind of put a damper on my holiday candy making. If I could make my own substitute for corn syrup that would make everything a whole lot easier. Your candies look wonderful, I wish I had a plate of them in front of me right now!

Looks like a wonderful recipe. Perfect for all my family members including those who cannot have gluten. I’m happy to ‘show off’ the creation of my hens’ eggs to my extended family with this Fudge. One question, how do you use the leftover egg yolks when you make this? I always think of ways to use whole eggs when a recipe requires only egg yolks or whites. I haven’t found a good one yet.

Ohhhhhh! That looks sooooo good! I’m going to substitute the nuts for some red and green cherries, chopped up. I can’t eat nuts – no bottom teeth at the moment. Bummer.
To anyone interested: I found some baking powder, Rumford brand, that has non-GMO corn starch and no aluminum. I made Texas sized blueberry muffins with it and they came out super! But, you can be pretty well sure almost all corn products in the USA are made with genetically modified corn. I worry about the pollinators like bees and butterflies. And organic farmers.
Shirley, I made two quarts of sweet pickles using your recipe here. It was so easy! The hardest part is waiting for the flavor to “mature” in two weeks. And my little house smelled like a pickle factory for a day or two. Can’t wait to get into them! (but I will)
Gosh, I love this blog!