I usually turn cinnamon buns into sticky buns with a delicious brown sugar and nut topping. We all like extra thick topping, so I almost always double the topping ingredients. Be careful though… when the sugar in the topping melts, it becomes terrifically hot, so when you turn these sticky buns out of the pan, don’t let any of the topping drip onto your fingers. 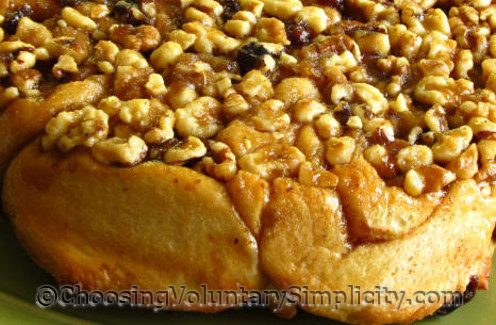 Dissolve the yeast in the lukewarm water. Add milk, sugar, salt, egg, and shortening to yeast mixture and stir in half of the flour. Mix until smooth. Add enough of the remaining flour so the dough handles easily. Knead until the dough is smooth. Let rise in a warm place in a greased bowl for approximately one and a half hours. Cover the bowl with a towel so a crust does not form on the dough. (Or mix this recipe in your bread machine.) Punch down, then let rise again until almost double (about thirty minutes). Roll out the dough into an oblong approximately 15 by 9 inches.

Spread the surface of the dough with approximately two tablespoons of melted butter and sprinkle with 1 1/2 cups sugar and two teaspoons cinnamon (mixed together). Press raisins into dough surface. Beginning with the wide end, roll up tightly and cut into one-inch slices.

Bake at 375°F for 25 to 30 minutes. Immediately turn the pan upside down on a larger tray. (Place the tray on top of the pan and turn both together.) The topping will still be soft and some will run down the sides of the rolls.

A Definition of Happiness

These look so good! I have printed off the recipe and will try to make them this weekend.

My mouth is watering just looking at the photo. My recipe is very similar, but to make it easier for myself, since I have problems making bread, I buy pre-made frozen dough and let it thaw. Probably doesn’t taste as great as the homemade but still yummy!

I made your recipe for these and took them to a ladie’s meeting. Everybody loved them. Several of the people there asked if they could have the recipe. I thought you would get a kick out of knowing that!

I made these too and they were WONDERFUL. Thanks alot much for sharing.

Thanks everyone. Yes Connie, I did get a kick out of knowing that so many people liked my sticky buns! I’m glad you all tried the recipe.

I use the frozen bread dough but I made the topping using your recipe. Everyone was right. These are so good.

Elizabeth and Mrs. C, great idea about making the buns with frozen bread dough. I often start out making bread in the bread machine and turn the dough into buns at the spur of the moment… and frozen dough is an even better idea.

I made these in my foods class the other day and my teacher used this recipe except replaced one cup of all-purpose flour with one cup of wheat flour. They were AMAZING!

We have a tradition of having sticky buns for Christmas morning. I think I’ll be holding onto this recipe to try this year!