This wonderful gingerbread recipe, like so many of my favorites, came from my mother. She was an exceptionally good cook, so the recipes she shared with me were always something special. This gingerbread is no exception… it’s incredibly light and moist with a great flavor. It’s also very easy and quick to make, because all the ingredients except the boiling water are blended together in a large bowl with an electric mixer for three minutes at medium speed… then the water is added and the batter is mixed again, just enough to blend thoroughly. That’s it!

My mother had made a notation in the side margin of the recipe that the one cup of boiling water might have to be adjusted, and that she often used a bit less. The first time I made this recipe I forgot that she adjusted the water amount and I added the full cup of boiling water, mixed everything up, and was positive the batter was too thin to bake up properly… but it did and I have made this gingerbread with the full cup of water ever since. Using the full cup of water takes an act of faith each time though, because the resulting batter IS very thin, so you might want to follow my mother’s example of using slightly less. 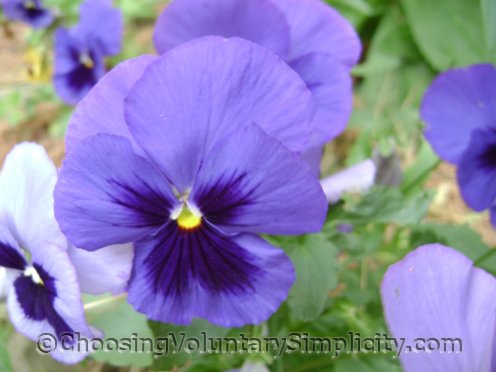 Pansies from my mother’s garden

Preheat oven to 350°F. Grease a 13 by 9 inch baking pan. In a large bowl, combine flour, baking soda, cinnamon, salt, ginger, allspice, sugar, oil, molasses, and eggs with an electric mixer on medium, beating for at least three minutes, or until the batter is very smooth. Quickly mix in the boiling water (you may want to use slightly less). Pour into pan. Bake for 35 to 40 minutes or until knife inserted into center of cake comes out clean. Cool in the pan.

By the way, this is another one of the recipes I use for making my own cake mixes. I measure out and combine all the dry ingredients (flour, baking soda, cinnamon, salt, ginger, allspice, and sugar) and store them in plastic bags the same as I do with my chocolate cake mix. Then it is a simple matter to dump the gingerbread mix into a large bowl, add the eggs, oil, and molasses, beat for three minutes, and mix in the boiling water.

This gingerbread freezes well, too.

Making Your Own Cake Mix

Mock Maple Syrup — Made From Potatoes

I want to try a recipe for an apple gingerbread cobbler and I knew there had to be a place that had recipe for a homemade the gingerbread mix called for in the recipe. I found you, a new favorite site!
Shannon aka Margarita Stewart

This recipe makes a lovely gingerbread. I can see what you mean about the act of faith because I did use the full cup of water but the gingerbread came out beautifully so when I make it again I will use the full amount. I have tried almost all of your recipes and each one is great. Thank you for sharing so many unique ideas.

I have made up several of your mixes and really enjoy having my own home made cake mix ready to go. It is important to me to know that these mixes do not have the preservatives and questionable ingredients that regular cake mixes do. My home made mixes are just as convenient as the store bought ones and they sure do taste so much better.

Thanks for another great recipe and also for the making the mix idea. I will add this one to my favorites. My whole family loved it and I served it for a family gettogether. There was nothing left on the plate and everyone was asking if there was more.

Your Mom’s gingerbread recipe is the 3rd I’ve made. The first 2 attempts were not good. 3rd attempt, 3rd recipe. It’s wonderful. I made 2 loaves and brought them into work. It’s wonderfully moist and makes a huge loaf.
I added dried cranberries, though they all sunk to the bottom. Still delicious!
Thank you sooo very much for sharing this recipe.

Dear Shirley, I have made this cake twice and it has been just wonderful both times. My family love it too. Thank you for sharing. Vicky