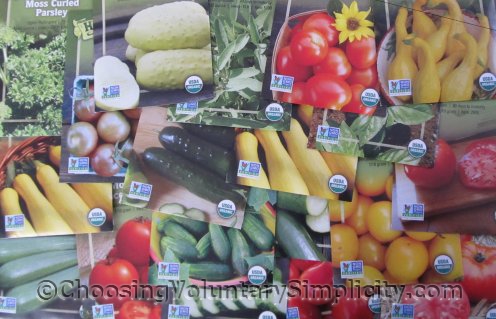 It’s that time of year again… when we spend hours poring over seed catalogs and trying to decide what we want to plant in the gardens this spring. I’m noticing a lot of different terminology in the seed descriptions… more and more seeds seem to be labeled organic, and almost every seed company displays some sort of disclaimer stating that their seeds are GMO-free.

So what do the terms mean? I spent some time comparing different explanations from different seed companies and seed saving organizations, and despite a lot of overlap and some mild disagreement about the different categorizations… here’s what I came up with.

First, certified organic… and that is the type of seed we’re buying exclusively this year. A good basic definition of organic seeds seems to be that the seeds have been produced without the use of… or exposure to… insecticides, fungicides, herbicides, artificial or chemical fertilizers, or sewage sludge. The seeds must have been grown, harvested and stored under strict organic rules and procedures, and must be certified 100% organic. This certification must be renewed each year.

Heirloom seeds are seeds that have been passed down through several generations. Some of the heirloom seed offerings are described as having been traced as far back as Thomas Jefferson’s garden, but the qualifying minimum time span seems to be at least fifty years, or preferably before 1940. Heirloom seeds can be saved and will grow true to type every year and are always open pollinated… which means that the pollination is accomplished by a natural method such as bees, other insects, birds, or the wind. Some of the research I read included pollination by humans in this group as long as the pollination was carried out between plants of the same variety.

Hybrid seeds, on the other hand, are created when two different varieties of a plant are cross pollinated. This also is a natural process between two plants of the same plant species, with the intended goal of creating a new offspring (or hybrid) with the best traits of each of the parent plants. Usually the goal of hybridization is a larger size or a disease-resistant, hardier, more uniform crop. This is NOT GMO.

GMO seeds are the result of genetic engineering. The plant’s DNA is altered and the process can include insertion of genes from other species. This is definitely not a natural procedure and could never occur without human intervention. I appreciate the seed companies giving me… and anyone else with similar concerns… the opportunity to avoid any seeds that are GMO.

Another thing to remember is that plants grown from purchased hybrid seeds will reliably produce a crop that will be basically the same from year to year… with basically the same size harvest. Seeds saved from hybrid plants, however, will produce plants that will almost always revert back to one of the original parent plants… and unpredictable results.

Although almost everyone seems to agree that the best flavor usually comes from the heirloom varieties, plants grown from heirloom seeds will produce a crop that can vary widely from year to year, both in flavor and yield… even from plant to plant… even in the same garden… and even in the same growing conditions… but seeds saved from heirloom plants will always produce plants and crops the same as the plant the seed was saved from.

This is a fascinating subject! I have always enjoyed saving seeds from the best flowers and vegetables that we grow. That way, we improve our chances of getting the best of the best.
For instance, we grow an heirloom tomato called “Mortgage Lifter” which is really a hybrid developed by a man back in the Depression. He would save the seeds from the best tomatoes on a plant and through trial and error developed a great, large beefsteak type with wonderful flavor. He sold the seedlings and was able to pay off his mortgage on his house.
We bought seedlings of this plant and have had unbelievable luck with our tomatoes even in time of blight and dry spells. And we always use only organic means to help these seedlings along. No artificial fertilizer whatsoever. Our neighbor grows tomatoes and is always wondering why his either die or are infested with disease when ours are six feet tall and producing a wonderful crop. I tell him to go organic starting from the soil up. He can’t be bothered and gets the same results and is left scratching his head year after year. One year, he bought some corn from a roadside stand that he especially liked. He saved the best ear and planted the seeds the next year. I told him not to expect the same quality of corn from those seeds because the parent seeds were hybrid. He still can’t figure it out. He just likes to complain, I guess.
Sorry this comment is wordy. I just find the subject fascinating and very important. Thanks for bringing it up.
Love, Jo

Very interesting article. I felt very confused trying to choose seeds this year because the descriptions were not like before. Your info was very helpful. Thank you.

Apropos your article on saving tomato seeds and what you wrote about saving seeds from one hybrid tomato every year. I saved seed from a hybrid tomato 2 years ago and grew more last summer with unexpectedly great results. Everyone told me I wouldn’t get anything. I was happy to prove them wrong. I saved more seed from the best plants and will try again this year. It’s an adventure to not know what the result will be.