Reader question… “I am wondering what are your thoughts on genetically modified foods? I am trying to avoid GMOs wherever I can, but I’m finding it’s very difficult and I feel like I’m in over my head because I don’t know what is Ok and what isn’t. I know that because of your soy allergy you have a lot of experience reading ingredient labels and knowing what goes in the food you buy, so my question to you is, do you think it is really important to avoid GMOs, and if your answer is yes, how do you personally do it?” –Janice G.

Avoiding genetically modified foods should be easier than it is. Some countries, including those in the European Union, Japan, Australia, and New Zealand, have a mandatory labeling policy for GM food products. Manufacturers are required by law to show on the label if any of the ingredients have been genetically modified. OUR government takes the opposite approach and does NOT require manufacturers to disclose that the product is a GMO (genetically modified organism). I have yet to see a “contains GMOs” label, but it is encouraging that a few manufacturers have taken the initiative and are starting to label products as GMO-free.

At this time there are four crops that are considered to be the most commonly genetically modified crops in this country. These are corn, soy, canola, and cottonseed. 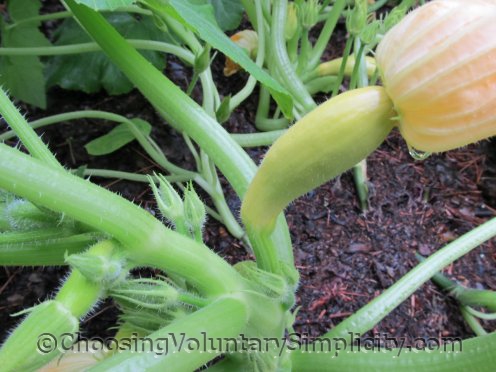 Summer squash is often genetically modified, so we grow our own from organic, non-GMO seeds

I have spent weeks trying to find non-GMO replacements for some of the food items and baking supplies that I have used for years that now suddenly contain GMOs. The single ingredients are easier to avoid… it’s much more difficult to avoid the hidden ingredients or the derivatives made from corn and soy. Many people are already trying to avoid high fructose corn syrup, but how about the corn in baking powder, corn starch, or even the dextrose (corn sugar) that is hidden in so many products (for example, iodized table salt)? Unless you live in a bubble and grow everything you eat… and if you eat meat, eggs, and milk, unless you also grow everything the animals eat… OR know for certain that these sources are GM-free… it is impossible to avoid some consumption of genetically modified foods or ingredients.

So yes, I am personally concerned about genetically modified foods, and I am trying to avoid those I can. I have purchased GMO-free baking powder, corn starch, and corn meal. I am frustrated by the lack of information that is available from the manufacturers and by the prices of the GMO-free items I have been able to find so far.

Our best recourse in the absence of a “GMO-free” label is to look for products that are labeled “100% organic.” The “100%” is important… this is the only organic labeling that guarantees the food item has not been genetically modified and does not contain genetically modified ingredients. Understandably, these 100% organic products cost substantially more than similar products with GMOs. I think it is unfortunate that the choice is being taken away from us. Many people are being forced to include genetically modified foods in their diet… even if they don’t want to… as price becomes the deciding factor.

One Year Ago Today…

Thank you for writing this article. I have been increasingly worried about this subject for some time now and it was wonderful to read such a sensible summary of the problems. I try to go non-gmo as much as I can but I know there are gmo products I’m missing just because I don’t know they’re there. I wish our government would respect us enough to mandate honest labeling so we can make our own *informed* decisions. Thanks again for a very helpful article (and a wonderful blog).

I didn’t realize about the 100% organic but it gives me a good base to work with. My wife is also allergic to soy – very seriously allergic – so we have to be extra careful with what she eats. We too find it frustrating that the labels aren’t always accurate.

Well this was an eye opening article. I have heard of genetic modification and genetic engineering but I had no idea so much of it had found its way into our food supply. Why do the big corporations and the government think its OK to use the rest of us as their laboratory? I’m going to be making some changes in my diet, that’s for sure. Thank you for all the info.

Thanks for the tip about the organic flour and thiamine mononitrate. I had about given up on ever finding flour that didn’t contain this and we were regularly getting sick from eating it. I made a few phonecalls asking for organic flour and bought allpurpose and wholewheat without thiamine mononitrate. Even my husband says his stomach feels better and he is not allergic to soy. So thank you very much for this article. I find your site very helpful and super interesting too.

Until we as a nation can get corporate money OUT of the election process, we will have a government run by and for corporate interests. We do not have laws protecting us from GMOs because corporations such as Monsanto know that to label food as containing GMOs would mean a substantial loss of profit.

One more thing to be concerned about regarding genetically modified crops – the pollinators like bees and butterflies are being wiped out in some instances by these crops because of the herbicides and pesticides used.

Personally, I would rather starve then to eat gmos. Seeing the short term results on rats makes me question the increase in cancer, autism, and other conditions. I am glad to know that I am graduating college this year. If prop 37 does not pass, I may move to a safer country before starting a family. When the price factor comes in its like deciding between contaminated and non contaminated. It seems that everything is a gmo and its disturbing. I will boycott all products containing gmos as well as those organic brands funding the opposition to 37. Thanks to you for caring about your body, our food, and our future generations

Interesting reading.In Australia we have much the same issues.I’m yet to see products labeled as containing GMO.So I guess that these laws are not as mandatory as I and others would like.ideally I would go organic and boycott any product with GMO but if I did my family would starve with our small budget.So we avoid the most obvious big ones and limit the ones we are not sure about and trust God to do the rest.God willing the garden might finally start producing this year and our veg will be organic:)