Change is hard… and big change is REALLY hard. I think that’s why so many people are often resistant to making changes in their lives. They will stay in situations that make them unhappy… continue to work at jobs or in professions they hate. It’s scary to leave your comfort zone… it’s scary to take that first step and face uncertainty and the unknown… it’s almost always easier just to “keep on keeping on.”

I think the reason that change seems so overwhelming to most people is that most changes, like a pebble dropped in a pond, will ripple out to affect other areas of your life. There are just too many consequences to think about… too much to deal with all at once. 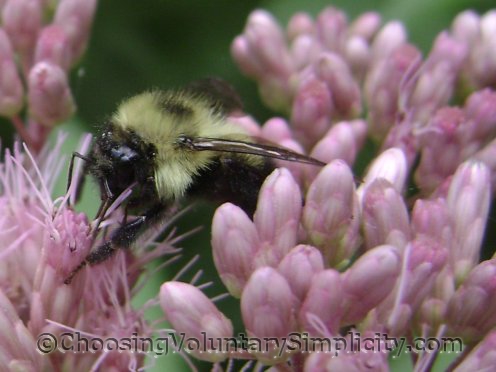 It’s exactly the same when you’re facing a big project. It doesn’t even matter what the project is… it’s the size of the project that is so overwhelming. It’s easy to think that there’s no point in starting because you could never finish it anyway.

My husband and I have discovered that for us, the easiest way to instigate a change or tackle a huge project is to just jump in there and take that first step. If we just do SOMETHING we know we can easily deal with… make one small change or do one small part of the project… we have made a start. When we’re done with that, we move on to another small change or another small part of the project… and when that is taken care of, we move on to the next. This is very empowering because we don’t have to worry about making the major change all at once, or finishing the huge project all at once… suddenly both have become an approachable and doable series of smaller steps.

My husband likes to say that this is something he has learned from me… I think it is something we have learned together.

Of course, at some point we will have reached the hardest part, some big step or change that can’t be broken down… maybe even something we’re not quite comfortable with and wish we could avoid. By that time, though, the huge project is well on its way to being finished… the big change isn’t quite so scary… and we have created a momentum that will carry us through to the end.

And remember… since you have already taken that first step… it’s almost always easier just to keep on keeping on!

One of my favorite quotes is from Elisabeth Elliot: Do the next thing. I’ve also found that when I just force myself to do something to move forward and break the inertia, that generally things start moving forward much more easily.

This is such a good way to start something, and I also find that making a step – and even a small one – helps me feel like I’m actively making a decision and in control, rather than just leaving things to happen to me by default because I didn’t act at all.

You are 100% right – just take one small step at a time and before you know it you are nearly done with a project that seemed insurrmountable just a few short steps before. I have often conducted my life this way – to the complete amazement of close friends and family. I guess I’ve just always known that fear can be too paralyzing and that if I let fear dictate what I would do/not do, then nothing would ever change – and I’m just not happy with that thought. One step at a time! Thanks for writing about this!

So true, I considered making changes to my life for a long time, I read a lot of blogs on how to downsize, how to save money, how to stretch money, how to meal plan and all sorts of advice. I was an ‘expert’ in how to do it but wasn’t doing any of it, I dont know what was stopping me, I procrastinated about what if’s, until I remembered the quote ‘ the a journey of a thousand miles starts with a single step’

Whatever I was going to do was a positive step in the right direction, so I worked on one thing at a time and I am so glad I took that first step to a happier more contented life

Just like the old question “How do you eat an elephant? One bite at a time.” When you think about it in the big picture, it seems overwhelming. That is when you break it down into more manageable pieces. Then it becomes a whole lot easier.