We will have a rather weird memory from the holiday season this year… an incident we’re calling the Great Potato Chip Heist. It happened a couple of days after Christmas in the parking lot of a grocery store about a forty-five minute drive north of our house.

My husband had just left the store and had the three carts of groceries lined up close to one side of our car. He was busily loading the bags into the back of the vehicle when he heard someone yelling and looked up to see an older woman waving her arms and hurrying toward him. She had, she insisted, just seen two teenage girls steal a bag of groceries out of one of the carts, and that another girl waiting nearby in a car with the motor running had driven past to pick the two girls up. The woman had somehow managed to write down the license number of the car and was determined to report the incident to the store manager. By the time my husband had loaded the rest of the groceries into our car and followed the woman into the store, the manager was already looking at surveillance tapes… and sure enough everything had happened exactly as the woman had described. 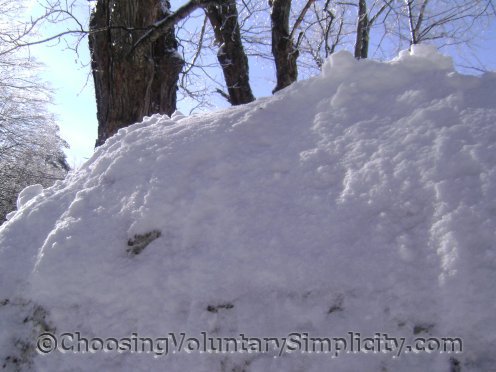 It took a while but they finally figured out what the girls had grabbed… one of my canvas shopping bags containing two very large bags of extremely expensive gourmet all-natural potato chips. They’re the only soy-free chips available in any of the stores around here and were the primary reason for this particular shopping trip.

Everyone except the woman seemed to think the incident was more of a teenage prank than a crime and that nothing further would be done. Without being asked, the store manager handed over the cash for the two bags of chips… no reimbursement was asked for or offered for my canvas bag.

And as luck would have it, the store had sold out of this particular brand of chips. So the Great Potato Chip Heist had a second minor repercussion… our small New Year’s Eve party was by necessity potato chip free.

Peace Amid the Storm