The saga continues… you can find the first parts of this story here, here, and here.

A different telephone company repairman stopped by today, and he said he was shocked that the telephone line leading to our house is such a terrible mess of deteriorating insulation and exposed connections. But we already knew about that… and the static and crackling noises on the line… and the super-loud hum that is always in the background during a telephone conversation… and the problems these cause with our dial-up connection. Often there is so much noise on the line we can’t make a dial-up connection at all. 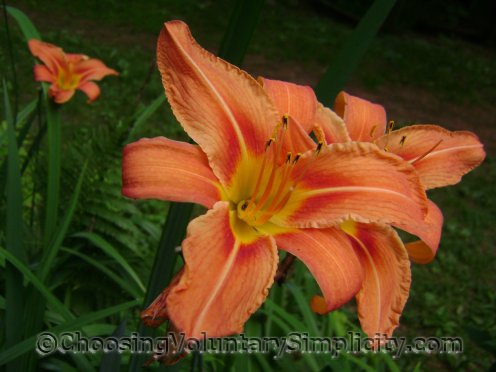 We have lived with this situation for nearly six years now, and the telephone company repairmen themselves describe what they’re doing as “putting band-aid fixes on gaping wounds.” In March of this year after several days of rain things started getting even worse. We kept losing the dial tone and would have no telephone service at all for days at a time. Several more temporary repairs left us with a new problem… we had a dial tone again, but our maximum dial-up connection speed had decreased to only 26.4Kbps.

For all of you lucky broadband people, and dial-up people who are able to connect to the Internet without even thinking about the speed, a 26.4Kbps connection is fast enough to receive and send e-mail and view some web sites… as long as the site doesn’t have many photos or use a lot of JavaScript or Flash. Receiving or sending mail or loading a site at this speed takes a L-O-N-G time… sometimes a half hour or more. Often the connection just doesn’t go through. Although the telephone company has always known that we need the telephone and dial-up Internet service for our work, they have always insisted that as long as we had a “reasonable dial tone” they were not required to make further repairs or improvements to the lines.

Since March we have done the best we could with the 26.4Kbps Internet connection speed. Then several weeks ago the connection speed suddenly dropped to 19.2Kbps, and then 12Kbps, and 4.8Kbps, and 2.4Kbps… depending on the amount of moisture in the air. This week for several days the speed has been 2.4Kbps, which means there is absolutely no hope of connecting to the Internet at all. Yesterday I tried to call in another complaint. The service representative said the quality of the line was so bad, I should switch to another phone line. I told her that was our problem… we did not have another phone line! She suggested I use our cell phone and seemed surprised when I told her that we have no cellular phone service in this area, which is why our landline phone is so important to us… even though all of this information is already documented in our by-now very thick file. Today’s repairman told us that there was a great deal of detectable “signal leakage” on our line. He also told us that all the repairmen for this area know about the many exposed connections that are causing our problem… especially one area not far from our house where the protective covering over one set of connections keeps popping open and has to be reseated. Apparently no permanent fix has ever been suggested or attempted.

Months ago the public utilities commission advised us to continue to call the telephone company each time the telephone line deteriorates to an unusable level, and we have continued to do that because supposedly this is the only way we will ever get real results. Each time we call with a legitimate complaint, the telephone company is required to do “something,” even though so far all the fixes have been temporary. They keep promising that they have plans to replace the entire line in the near future, and at one point about three months ago we were told that the new line was ready to go… and that all everyone was waiting for was to have the paperwork filed. Now they’re telling us that our problems will be solved with the expansion of their broadband service into our area, which they promise is only weeks or months away.

All these promises sound wonderful… but the reality of our situation is that we’re now having so many no-phone, no-Internet days, we’ve gotten to the point where we’re relieved when we get the 26.4Kbps dial-up speed back… and of course I mustn’t forget that reasonable dial tone!

Shirley, you must have the patience of a saint. If it were me I would get a lawyer and sue them.
A telephone line is a life line.

I was on dial up for a long time after moving to the country. We finally got rid of the land line entirely and put that money toward satellite internet. (we do get mobile service, so it is a viable option for us)

But boy do I remember how hard it was to do much on the internet at even 56k. I hope something gets resolved for you very soon!
Blessings!
Amy

You have my sympathy. Here in France we have one single ‘phone company who can play with the wires, and they can be…slow. Plus we live physically at the end of the line and it is a recurrant problem.

Every couple of years we have them out because the line is poor, and every time we are told that if the problem is in our house then we have to pay, but every time it is the line which has chaffed against the post at the end of the lane.

A bit of duct tape would fix the problem for good, but that is not prescribed equipment!

I could swear you were telling our story here. We live out in the country in a 90 year old farmhouse and have had to call our telephone company numerous times about the same issues. We have gone up to a week at a time with no phone. We keep getting that its the mice getting into the box. I don’t care… just want them to fix it!

I’ve lived with poor phone service and no cell coverage. I’m at least 10 miles away from a pay phone. I finally got the number of the goverment oversight agency (don’t remember if it was state or federal). The problem was resolved in 24 hours. Not kidding. They reacted best to the phrases “remote area” and “safety concerns”.

I also thought I was reading my own phone horror story – so much the same. I still have a bad phone line but now for Internet I have Hughes net satellite, which is not great or cheap either. Never can tell when I will have Internet service or what speed it will be. I do still like living in the country, but phone and Internet service is madding and I have to live off my Internet business. Technology keeps getting better – except for people out in the country it seems.

I really don’t understand why people can’t grasp how important it is to have good telecoms in more isolated places. You would think that after areas with great concentrations of people (ie large cities) you guys would be the next priority! I mean, without reliable phone service, you guys are stuck – you miss out on all kinds of things ranging from necessities to creature comforts (after all, if you live in suburbia you can pop out to mail something at the PO or rent a movie and the like, it’s when you live way out that things like printing off postage and the itunes movie rental service REALLY come into their own lol).

I can’t imagine the stores of patience necessary required to do anything in today’s internet with a connection that sounds even weaker than what I had twelve years ago! It’s not just that it’s a lot slower than the standard out there, it’s that today’s websites are not optimized for speeds as slow as that. I don’t know if you remember, but it used to be (until around mid-decade or so) that many sites with a lot of heavier content would first offer a screen where you could choose a lighter version or the full version, depending on your connection speed. Nowadays, you hardly ever see something like that except maybe on some very large websites aiming for super-wide appeal, like parts of the BBC websites.

I am even more amazed that you have this lovely large, active blog given those difficulties, however!