For several months recently the soy allergic people in our family suffered some very unsettling reactions even though we only eat foods that are supposedly completely soy free. Obviously we were eating something on a regular basis that was causing these reactions. I could think of only two possibilities… the flour I was baking with or the whole grain brown rice. 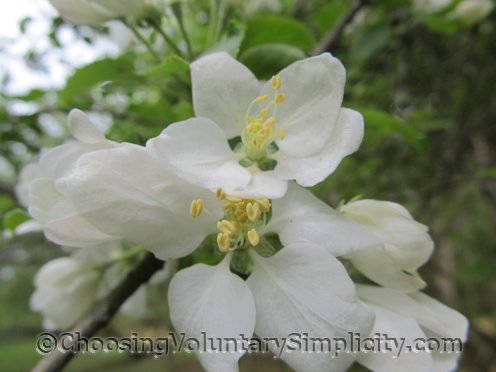 Over the last few weeks I have spent some considerable time on the telephone with representatives from various companies, trying to get some definitive information about thiamine mononitrate… is it made from soy (or corn) or is it now produced synthetically? It was difficult to get any real information because most of the people I talked to just did not have the answers.

Only one company actually made an effort to find out the source of the thiamine mononitrate in their products. This was King Arthur Flour. We have been buying their organic all purpose flour for over a year now because “normal” all purpose flour is always enriched with thiamine mononitrate. We buy the organic flour in fifty-pound bags, and one of the local stores special orders it for us. The price varies, and this flour is expensive, sometimes more than a dollar a pound, but it contains only organic wheat flour and organic malted barley flour… no added enrichments, no thiamine mononitrate.

I called the King Arthur customer service number and asked my questions about thiamine mononitrate… if I could be confident that the organic flour did not contain anything that wasn’t listed on the bag… and could I be confident that it was not cross contaminated by another product (like the regular all purpose flour and other flours) that did list thiamine mononitrate as an ingredient. The customer service person said she would post my questions on their private network so their chemists and other experts could provide accurate information. She said she would call me back with the answers in about a week.

It turns out that the organic flour contains no unlisted ingredients. It is also processed and packaged separately on a dedicated production line, so there is absolutely no possibility of cross contamination.

It was a relief to know for sure about the flour, but that still left the brown rice. We’ve been buying Carolina whole grain brown rice for about the same amount of time we have had unexplained periodic bouts of severe soy reactions. The label lists only brown rice as an ingredient… with no mention of thiamine mononitrate or any added enrichments… but once we had eliminated the flour as a possible source of soy, the only other possibility was the rice. So I made another phone call.

This time I was only able to speak to a customer service representative who assured me that the Carolina whole grain brown rice was not enriched and did not contain any ingredients that were not listed on the label. I told him we were positive that this unenriched, thiamine mononitrate-free rice was the cause of consistent severe allergic reactions and asked if there was any possibility that the rice could be cross contaminated by one of their other products. I wasn’t surprised when the representative admitted that the rice that wasn’t enriched was processed and packaged with the same equipment that processed and packaged the rice that did have the thiamine mononitrate added. He said the thiamine mononitrate came from several sources, so it would not be possible to know if it came from soy. I suggested that if there was even a possibility of an allergen like soy being present in a product, it might be a good idea to list that possible cross contamination on the package. The representative agreed that it “might be something they should think about.”

Our mystery seems to have been solved. If I don’t feed my family the brown rice, no one gets the allergic reactions. I have tried rinsing the rice extra thoroughly before I cook it, but this only seems to help sporadically. Whole grain brown rice has become another problem food.

So… if you are experiencing unexplained soy allergic reactions, consider that the problem might still be thiamine mononitrate. Call the manufacturers… don’t just accept general information that may not apply to your specific situation.

Make Your Own Citrus-Scented Disinfectant Spray

My husband had a severe reaction to eating Mahatma Yellow saffron rice. His throat closed up and he couldn’t breath. Apparently this rice is part of a company called Riviana Foods which is in turn owned by Ebro foods in Spain. They also own most of the rice companies in the world. Obviously this is a bad ingredient that should not be made or used.

I’ve got goose bumps. I can’t believe I found this today because I have been semi sick for weeks and weeks, occasionally getting really sick, and I did not know what soy I was getting into because I am careful to eat nothing with soy. I eat the same rice almost every day and I did not think of cross contamination. Thank you so much for the heads-up.

I have a soy allergy too and I have been to the Emergency Room more times than I care to think about. It makes me furious that our health is being played with this way. Can you imagine any of these manufacturers putting peanut oil or other peanut products so casually into foods? Why isn’t the soy allergy treated as seriously?

I am very grateful to you for the information you have on this site about soy allergy. I struggle everyday with soy exposure and it is reassuring to know that I am not alone. My one hope is that a day will come when we can eat without worrying about some undisclosed ingredient. Keep up the good work.

I read somewhere that eating soy makes a gluten intolerance worse so maybe that bit of information will eventually prove to be beneficial for those of us who have soy allergies. I agree with Brenda. Except for possibly the poor people with corn allergies I don’t think any group of allergy sufferers are treated as badly as those of us with soy.

Shirley:
I found your site and am totally impressed. Thanks so much. My husband and I have no food allergies but have been slowly progressing to have no processed foods in our pantry. Some of our most favorite foods are the breads/pastries. We have not bought a loaf of bread in almost 6 years. We wanted our bread to be preservative-free and still have the nutrients of whole grain. We bought a high impact (Nutrimill) grain grinder and grind all of our bread and pastry flours as we need. After we started doing this, the docs were scratching their heads and asking what we were doing to get ourselves so much healthier. :) We also grind other things like black and white beans for added nutrition in soups, stews, cookies,plus making instant refried beans, etc.

Hi Shirley,
This site is a true public service, thank you so much. I have struggled with an unknown sickness for years, and it turns out to be caused by soy. I was still buying enriched flour and pasta; since reading your entry, I have cut that out. It has been a slow process for me because I did not know the cause and then did not know of all the hidden soy. I used to not care at all about my food source, loved McDonalds and thought Twinkies were underrated. Now I make my own saltines (!) and am the weird one with my own food at office gatherings. I still try to find things I can eat from the supermarket and then suffer. Recently it was a French brand of raspberry jelly made with lemon juice and pectin–really? Are they using soy pectin now?? Who knows. Please keep posting your thoughts on soy-free food; it has been a huge help to me.