Home » Simply Personal » Things Could Be a Whole Lot Worse

As weeks go this one hasn’t been the greatest. On last Sunday night the weather forecast was for overnight temperatures near thirty below zero and strong winds that would make the wind chill temperatures even lower. The house was warm and cozy when we went to bed… when we woke up it was COLD!!!

Our furnace is set to maintain a certain range of temperatures so the coldness we were feeling was unusual, but the reality that something was very wrong didn’t sink in immediately because we knew how terribly cold it was outside. Then we discovered we had frozen water pipes and just to make everything perfect… frozen drains as well. And when we went to turn the thermostat on the furnace up a notch, we found that the furnace wasn’t sending out any heat at all… and in fact was frantically blinking out its little error message to indicate that it had stopped running entirely. 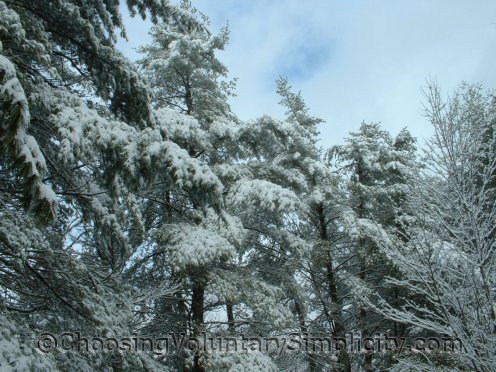 It was not the best way to start the day. We weren’t sure what to tackle first, but it seemed that the furnace and lack of heat was our most pressing problem. My husband installed this furnace nearly twenty years ago and he has done all the maintenance and any repairs it has needed, so he knows it well. We were hoping that the problem was something mechanical or electrical because we knew my husband could fix those… but those hopes died when he traced the problem to a combustion fan that had stopped working even though it was receiving electrical current. Unfortunately, this combustion fan is part of a plug-in assembly that is replaced as a unit, not repaired.

It feels like we have spent most of our time since then trying to find a source for this plug-in assembly. I think we must have talked to every supplier in this country who sells this brand of furnace, and all of them say they cannot order this part because it no longer exists. Apparently in later models this electronic plug-in assembly has been redesigned and replaced by another assembly that is not compatible with the older furnaces. We just heard back from the last supplier on our list, and he also can’t find a replacement. It looks like we will have to buy a new furnace.

But back to Monday morning. It took hours, but we eventually got the drains and water pipes thawed… and then we discovered that we had yet another problem. Our largest freezer also had stopped working sometime after Sunday evening. We think there must have been another electrical surge in our power lines that “fried” the freezer motor… and probably that electronic assembly in the furnace too. It just seems like too big a coincidence that both would suddenly “die” during the same night, and we have been having problems with electrical surges here for some time. Even though we have all our major appliances plugged into surge protectors, during the past few years we have had three computer modems, a fax machine, a DVD recorder, and now the freezer and furnace ruined when too much current has “accidentally” been sent through the line. The electric company periodically acknowledges the surges and apologizes. Somehow that doesn’t seem like enough.

It’s been a discouraging week. I guess we should feel fortunate that it is so cold outside and all the frozen food that was in the freezer will stay frozen in containers buried in the snow until our new freezer arrives. And although one floor of our house is very cold, the wood stove is working overtime to keep the other rooms comfy and warm. We’re looking at some major expenses, and that hurts, but at least we have the money saved for emergencies like these.

Things could be a whole lot worse.

It Will Always Lead To Something Else…

“Instead of Salt” Herbal Salt Substitute

Visual Proof That Nothing Is Impossible

My grandmother always believed that everything happened in threes. It sounds like you have already gotten your three bad lucks out of the way this week. I enjoy your blog btw.

Wow, what a week! Your luck sounds like my luck~

You have had a terrible week and your taking it alot better than I would be. Heres hoping everything works out good for you.

It sure sounds like you’re getting hit hard. I’m impressed though by how positive you’re being in this situation. It’s like my mother always said, it never pays to go into a panic during a crisis because then you’ve just added a second crisis! Thank you for your posts, I always find your blog inspiring.

Oh I’m so sorry! It does sound like these aren’t just coincidences. Do you have any kind of surge protection (says the wife of a computer geek)? Is there any way to confront the electric co with responsibility?

Wow, what a week! Take time to be kind to yourselves in this midst of all of this stress.

I discovered your blog when researching the economic effects that income loss had on family values. Nancy Folbre referred to the Voluntary Simplicity Movement and I was instantly intrigued. I have gone back to school after losing 2 jobs in 10 months to the “economy”. Before that I had been employed for over 30 years within the same industry. I love the fact that we now recycle everything and have stopped obsessing over money, money.

I’m sorry! It does sound like a bad week! If you are having problems with surges, you might want to consider getting whole-house surge protection. This is actually tied into your electrical and not just a power strip. It’s can be expensive, but may not be as expensive as a new furnace and freezer.

These are one of the hazards we face when we live so far north. I hope things get better. Perhaps you should see if there is a place that sells second hand or refurbished parts for the furnace.
I remember one summer when we were at our farm in northern Minnesota we had a terrible summer storm which knocked out our sump pump. water backed up into the basement up to 2 inches and killed our freezer. This happened in August and we didn’t get home for another week. Although my dad was checking the house, he never thought to check the basement. We had rotten meat and maggots. Yes, it could have been worse.

Gosh, Shirley, I hope things get better real soon for you. I was going to suggest what Charleen just suggested – see if there is a place that sells used parts. I can’t tell you how many washers and dryers I have fixed by just going to the “dump” and picking over the castaways. Of course, nowadays you aren’t allowed to do this, but some junkyard, like an automobile junkyard might know of someone who saves parts.
I’m an old “war baby” and grew up in a time of ice boxes and outhouses in rural Maine. Things were simpler then, but those trips to the outhouse in the middle of the winter could be an occasion not likely to be forgotten!!
I can remember my mother crying for joy when she got her first automatic washing machine.
Many parts of Maine took years and years to come out of the “Great Depression”. We were all poor, but never realized it because everyone was in the same boat and we all helped each other out.
God bless you, Shirley, for the memories this blog brings back. And good luck surviving another interesting Maine winter.

I’m sorry that so much is hitting you at once, and during such a cold winter at that. I’m so glad you have your wood stove as a backup for heating.

WOW and Ouchies at the same time. Thank goodness it is still cold out for the freezer stuff. I can relate to the furnace going out. Mine goes in January early Febuary for the can(trailer). I still have the space heaters for now that I had in my office and waiting to get a “Real” House and saveing pop cans for the wood burning Stove. Try to stay warm and I am sending warm thoughts to the household.

Sorry to hear about your bad luck. I live in a warm area, but I’ve heard that furnaces have come a long way in the past few years, so it may be that a new furnace will be much more efficient – better for the planet and better for your wallet, at least after a few years.