Home » Simply Personal » This Month Started Without Me

Look at that… blue sky AND sunshine!!! That’s something we haven’t seen for a while.

We’ve just gone through a period of twelve days of almost constant rain and severe thunderstorms, one right after another. We’re lucky we’ve had no major damage here from the storms, but our electrical power has been off and on. For a lot of those twelve days it has been mostly off.

Even with all the rain the temperatures here have been abnormally HOT. It has been a very weird weather period.

And… we have the flu. All of us and all at once. I think we’re all finally starting to feel better instead of worse, but we have been really, really sick. 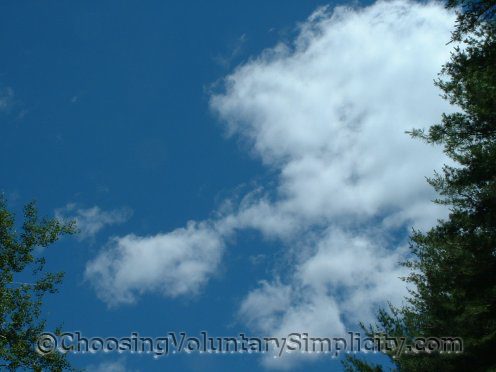 I think having the flu must have affected my judgment, because for some reason yesterday I decided it would be a good time to do a general housecleaning of the site, make some format changes, upload more photographs, and take care of a lot of minor details I haven’t had time to do before. When I started, the electricity had actually been on for more than a few hours, but of course that all changed once I was in the middle of some serious uploads. The power went off, back on, and off again for four times, I think, and then it went off for good. This time we didn’t have any electricity at all for nine plus hours. My laptop has five hours of battery power, but the Internet modem needs electricity (life is different in the boonies). The electric company had stopped giving estimates of when they hoped the power was going to be restored, so sometime after midnight we eventually decided to call it a day and just go to bed.

The power was on when we woke up this morning, but it still seems pretty iffy because this area is now experiencing what they’re calling “ongoing outages.” Apparently there was severe damage from yesterday’s multiple storms and power lines and trees are down all over the area. Right now we have electricity… but it has already been off three times this morning. I don’t think this would be the day to work on any projects that require uninterrupted Internet access.

So that’s what’s going on here. What was your weekend like?

What Is A Home?

We were in that line of storms too and yes – they were horrible. Lightning struck a gigantic maple at the side of our property and it fell forward onto our garage. Not much damage surprisingly but what a mess to clean up. My husband doesn’t have a chainsaw so one of the neighbors came over in return for the wood. Hope you feel better soon from the flu and take care of yourself.

We actually had a great weekend because we got married! Just a small wedding with close family but it was nice. No storms here but we’re in the south and it was also hot here. I just found your blog last month and enjoy your posts.

It was a stormy weekend here as well but we almost never lost electrical power. The worst here were the winds which were really strong. It was good to wake up this morning and see a change in the weather though.

It was lovely weekend in Riga, Latvia! The sun was shining, was really hot and most people were spending time at the Baltic Sea or any other place near water. Usually we do not have such a great weather at the beginning of June, but this year is very special!
Get well soon!