A while ago my oldest son asked me why I never made potato rolls anymore. It was a good question. I used to make them all the time. If I had a signature dish, these potato rolls were probably it. These were the rolls I made for us and always (by request) for family gatherings, but at some point… and I have no idea why… I stopped making potato rolls and started making the ice box butter buns instead. It has been literally years since I had made potato rolls. Until yesterday… 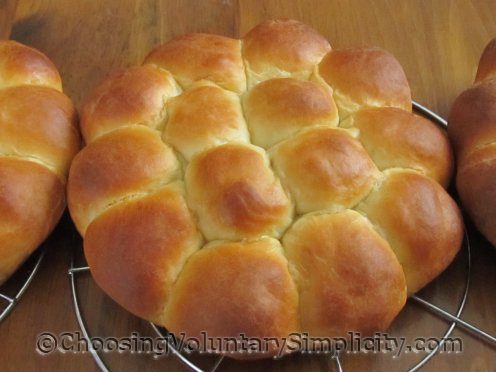 I had completely forgotten that I always used to mix this dough by hand… that’s what happens when you lose track of a recipe… so I just started dumping everything into the bread machine pan. I had gotten all the way to the fifth cup of flour when it suddenly occurred to me that the mixing pan was getting awfully full. I probably should have taken everything out and mixed the dough by hand, but I decided I would try holding back on the rest of the flour and let the bread machine do its thing through two cycles of mixing. That actually worked quite well. I waited until after a dough formed, added just enough more flour to make a good ball and let the machine knead away… then I finished the dough by hand. This wouldn’t be a good idea with all bread machines… this recipe makes a lot of dough… but it’s an easy recipe to mix and knead entirely by hand.

Dissolve the yeast in water. Stir in the sugar, salt, shortening, eggs, and the (hopefully lumpless) mashed potatoes. Mix part of the flour into the dough until you have an easy-to-handle ball. Knead the dough and add more flour if necessary until the dough is smooth and elastic.

Let the dough rise (in a bowl covered with a damp cloth) until it is doubled in size. Shape into rolls and let rise again until nearly doubled. Bake at 400°F for twelve to fifteen minutes.

An Easier Way to Wash Dishes

Man – those sure look good.

I have to agree. Those are beautiful looking rolls. I make your Ice Box Butter Buns all the time and we love them. I definitely will be trying this recipe. Thanks for sharing.

Lots and LOTS of deliciousness for sharing or freezing. You rock! :)

I made these yesterday and they are AWESOME! I baked half of the dough and put the rolls in the freezer and put the rest of the dough in the refrigerator to use as refrigerator rolls. I love the texture of these. I had never made potato rolls before but these were easy and turned out perfect. Thank you Shirley for sharing another one of your wonderful recipes!