Home » Sensible Frugality / Simple Living » What Will Ten Dollars Buy Where You Live?

CNN wanted to know what people could buy with ten dollars in the current economy, so they issued a challenge to their website visitors.

As you might expect, what people could buy with ten dollars (or the non-American currency equivalent) varied widely according to where each person lived. Some people bought used clothing, books, and records. A man in Taiwan bought “24 new pairs of socks and 10 new ties.” In California a woman used coupons to purchase a “huge stash” of processed foods, and another woman shopped at Whole Foods and bought “enough food for four meals.” In Bhutan a woman spent ten dollars to buy an entire week’s worth of vegetables at a farmer’s market. 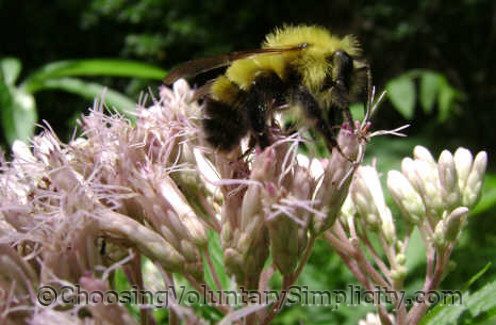 So what would ten dollars buy here? Figuring how much produce ten dollars will buy this time of year is a bit discouraging, even with this week’s sale prices. For ten dollars I could buy:

And ten dollars would pay almost seventy percent of ONE day’s worth of real estate taxes for our house and land.

What does ten dollars buy where you live?

This morning $10 paid for three pounds of chicken breasts on sale at a supermarket chain here in Maine. I saved $1 per lb. The chicken breasts will be meat for tonights supper for 6 of us. (Me hubby and 4 kids ages 6 to 12).

surviving and thriving on pennies

I live in Northwestern Canada where grocery prices are high.
A gallon of regular milk is $4.25, it would be $7.97 if I wanted organic.
I can get a pound of lean ground beef for $2, on a good sale
A head of lettuce for $1 and some crappy tasting tomatoes for $1.97 a pound.

1. Fresh vegetables to last our vegetarian family for around 1.5 months. Or

6. Enough gas for two weekends’ worth driving around for shopping/movies/eating out. (My husband takes the company bus to office and I’m a homemaker, we seldom take the car except in weekends.)

Oh, and if we bought chicken with it, we could get around 5 kgs of dressed chicken – 6 lbs.

Here in Alaska $10 will get me 3 gallons of gas;
or
A 10 lb bag of russet potatoes, 2 lbs of apples, and two heads of red leaf lettuce
or
5 packets of heirloom seeds from Seeds of Change

Here in Holland ten dollars is about 7,50 euros. With that amount I could get one bread and a bag of fruit, to last my family of three for a week, at the market. Or I could buy 4 liters of gas. Haven’t got a clue what that would be in gallons. Weird enough it could also buy me two fleece-sweaters, made by little, asian children I suppose, so I won’t buy them.

The world is full of contradictions, that’s for sure.

Right now it will buy me 10 quarts of fresh leaf lettuce or 6 lbs. of fresh asparagus at the little farmers market in town.

Yesterday I had a haircut for US$6 (of course, at a very cheap place) and four pounds of apples and pears for the remaining US$4.
The exchange yesterday was 1US$ = 1.8BRL.

$10 at my local supermarket buys me one hot, ready-to-eat rotisserie-roasted chicken (24 oz, $4.99) and one plastic container of mixed salad greens (5 oz, $4.99). Dinner for two, to go. Note that this does not include dressing for the salad, beverages, or starch (rice, bread, etc) for the meal.

Organic milk is $5.99/gallon here. Non-organic milk is $1.99/gallon. My boyfriend is the big milk drinker and doesn’t care about organics, so $10 buys him five gallons of milk, or me two quarts of yogurt.
My favorite locally-produced, organic whole-milk yogurt costs $4.79 – $5.49 quart (unflavored is cheaper than the maple, which uses local syrup and costs more).

$10 will buy ten crisp, delicious locally grown Asian pears at $1.99/lb, but this is seasonal.

I save some of my own seeds, and trade the extras.
$10 will pay for bubble envelopes and postage to do four seed trades. I usually send out (and receive) at least 5 packets of seeds per trade. If the bubble envelopes don’t get too battered in transit, they can be taped up and re-used.

Four gallons of milk with which I can make $60 worth of Greek yogurt.

I’d buy a fruit tree or two. You can buy them at the end of bareroot season and if you plant them right away and give them plenty of water and care you will have hundreds of pounds of food growing on a tree that will probably outlive you.

What a fun post! I love to read what other folks get for the money!
$10 would get me a 3 lb bag of carrots, a 5 lb bag of potatoes, a 3 lb bag of onions, a 1 lb bag of frozen peas, and a whole fryer chicken on sale. For hubby and I , that is several meals of a hearty chicken stew.
Again—great post!

just got 2 kilos of cherries from the market, 1 kilo of nectarines, and 3 kilos of potatoes.

$10 hmmm
last week at Overwaitea we bought
10 lbs potatoes for $3
20lbs onions $2
gala, grany smith and naval oranges all at .89 cents a lb.
I live in Western Canada in the Northern Part. We don’t have the choice of local farms 8 months of the year is winter.

$10 still buys lots if you watch your prices. and have a root cellar ;) When you buy on sale and stock pile for a few months you are good.

in india, at the current rate $10 is around Rs 600.
that will buy me 5 bottles of shampoo or
one medium bucket KFC chicken (8pieces) or two large vegetarian pizzas at dominos
or 4kg of chicken or
a taxi drop to the airport 35km away or
buy you cheap food for 6days at Rs 100 a day or 6 bottles of normal beer or
a meal for two at a decent restaurant or travel from delhi to bangalore by train in the cheapest coach (second class)
whew! that was a mouthful. in india the very poor and very rich co exist in the same locality.

In Singapore, you can probably get

2) 3 to 4 meals if you’re eating out (rice or noodles) at any local hawker centres.