Home » Cooking & Baking from Scratch / How To's & General Information » When Did the Correct Method of Measuring Flour Become So Controversial?

When Did the Correct Method of Measuring Flour Become So Controversial? 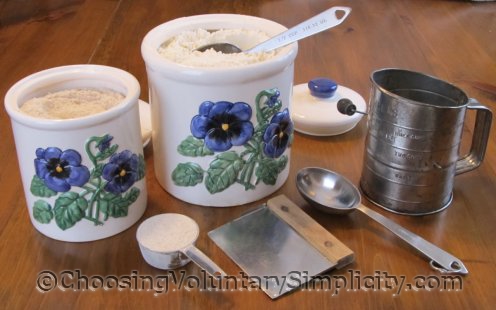 It’s a good question. When DID measuring flour become such an issue?

It seems that there are three methods of measuring flour in common use… the spoon, sprinkle and sweep… the scoop and sweep… and measuring by weight.

Let’s start with the spoon, sprinkle and sweep method. This is where you fluff up the flour in the bag or container and “sprinkle” it into your measuring cup with a spoon. When the measuring cup is filled to overflowing, you use a knife or other flat edge to “sweep” and level the top of the cup. Many people will tell you this is the only correct way to measure flour. One cup of all-purpose flour measured using this method weighs 4.25 ounces.

The second method, the scoop and sweep, is the method I usually use. I fluff up the flour in the bag or canister and lightly scoop out an overflowing cup of flour. I use my old pastry scraper to level off the top. One cup of all-purpose flour measured using this method consistently weighs 5 ounces. Opponents of this method often say that one cup of flour measured with the scoop and sweep method weighs up to 6 ounces, but I have noticed they do not fluff the flour before scooping.

Some people prefer to weigh their baking ingredients… 4.25 ounces for one cup of all-purpose flour.

It’s the scoop and sweep method that upsets people. I had no idea that a simple measuring technique could create such intensity of feeling until I received one angry email questioning my integrity and intelligence and accusing me of passing on incorrect information and not knowing how to correctly measure flour… all because I had endorsed the scoop and sweep method. And here I am… doing it again!!! :o)

I would guess that most current cookbooks recommend ONLY the spoon, sprinkle, and sweep method of measuring flour, and if/when I make any of these recipes, I would use their recommendations. And obviously for these recipes, my scoop and sweep method would result in a cup of flour that actually contains more flour than the recipe author is expecting… one-eighth of a cup more, actually. (I measured it!)

But I’m in good company… my email tells me there are many people out there who are still scooping and sweeping. Many of the experienced bakers you will see on television cooking shows, especially the older shows, use this method… including Julia Child, who insisted on one show that the scoop and sweep method is the only correct way to measure flour! (Apparently there was a controversy brewing even then.) The scoop and sweep method is the only method recommended in many of the older cookbooks, including Betty Crocker and Good Housekeeping.

So how do I measure flour? For a new recipe I will continue to use the spoon, sprinkle, and sweep method. For older recipes I will continue to fluff, scoop, and sweep, because those recipes probably need that extra eighth of a cup of flour. I don’t think it’s always an either/or situation, and I don’t believe that one of these methods is always right and another method is always wrong.

Perhaps it’s just another case of if it isn’t broken, I shouldn’t try to fix it!

By Request — My Oatmeal Bread Recipe

4 Unique Tips For Removing Garlic Odor From Your Hands

I’m also a scoop-and-sweeper, but we have always called it dip-level-pour. Same thing though. I agree that fitting the method to the recipe works the best. Interesting post.

Absolutely love those canisters. Would you mind sharing if they’re available for purchase now and if so where?

Lelia, I’ve had those canisters for many, many years. I gave my mother a set for her birthday one year because she loved pansies so much, and then she gave me an identical set the following Christmas. I’ve never seen them available for sale anywhere again… and I have looked, because a cover on one of the smaller canisters got cracked and I would like to replace it. There were four canisters of varying sizes with rubber gaskets on the lids.