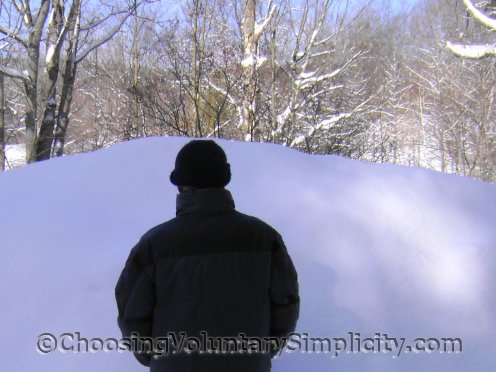 Several emails have come in over the last many days asking how we’re managing here with this winter’s extreme cold temperatures and excessive snow storms. Apparently the New England storms and subzero temperatures have become worldwide news. I very much appreciate all the concern and good wishes… although we’re used to harsh winters and impressive snow depths, and we’re well prepared to deal with both, I have to agree… this winter has been something else.

It almost feels like we’re living in a cave because of the way the snow banks are closing us in. The snow is so deep that it would extend up past the bottom half of the downstairs windows if we didn’t clear most of it away. But we’re running out of places to put the shoveled or plowed snow. Even the snow banks alongside the roads are as tall as a person now, and the paths near the houses are like tunnels. We’ve had huge snowstorm after huge snowstorm… eighteen to twenty-four inches seems to be the usual prediction these days when the weather people tell us a new storm is about to hit. And then there’s the snow that has to be shoveled off all the roofs… that has to go somewhere too. 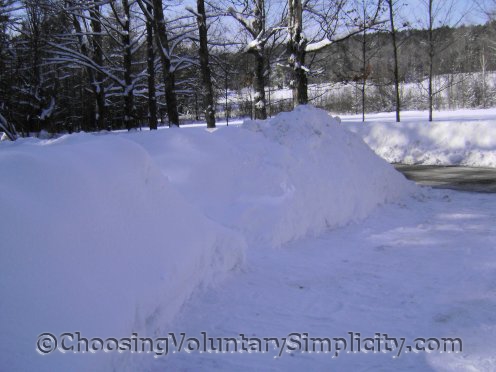 I think the main reason this winter has felt so almost unbearably harsh is because we’re having all these heavy snowstorms AND unusually cold temperatures at the same time, with almost no respite from either. For weeks now the temperatures have stayed below freezing during the day and dropped considerably below zero at night. Wind chills have consistently been between twenty and fifty degrees below zero. The weather people keep advising everyone to stay inside because the wind chill is so dangerous, and warning that frostbite can happen in as little as five minutes. When the snow stopped from the most recent storm, the temperature was five below zero with a wind chill of twenty-five degrees below zero… not ideal conditions for shoveling and snow-blowing.

Our electricity has been off quite a bit, and we’ve had problems with our Internet and telephone service too, with both being on and off and then on again. We’ve had a few days of frozen pipes and cars that wouldn’t start… but we have a generator, and the wood stove for cooking and heat when the electricity is off for a while. We also have an alternate source of water that doesn’t have to be pumped with electricity. We have lots of wood and plenty of food, kerosene lamps and candles… and most of the time we have been warm and comfortable.

My husband was involved in a freak accident one of those mornings when it was just too cold for cars to start. This is a car that has always started before if it is pushed. Unfortunately the car was already a considerable distance down the road before it became clear that this time was going to be different… the car was not going to start… it was just too cold. My husband and two other men were making a deliberately slow but steady progress pushing the car backwards up the road towards our driveway. My husband was standing in the space behind the driver’s door, walking backwards and steering the car as he and the two men pushed. All of a sudden without saying anything three neighbors who had been standing off to one side watching the procedure apparently decided they could speed things up, and they started pushing hard and fast. The car gave a sudden backwards lurch, knocked my husband to the ground, and caught his right leg in the door as the front left wheel of the car ran over his left thigh. Until the three neighbors finally realized what was happening and stopped their overzealous pushing, my husband was dragged along by his pinned right leg. I suppose under other circumstances it might have been amusing when a few minutes later these neighbors announced that they would be on their way, that they guessed they had done all they could!

My husband was incredibly lucky. He had a nasty cut on his right leg from being caught in the door, and an impressively colorful bruise and swelling on his left thigh where the wheel ran over it. He had trouble walking for several days, and the bruised area is still multicolored, but he is gratefully OK.

And we ARE so very, very grateful. Somehow all the extreme cold and snow doesn’t seem all that important any more.

The Rewards Of The Simple Life

Wonderful news that your husband is ok! But those three neighbors, wow! I would nickname them Larry, Moe and Curley. :)

Jo, that’s just about what we thought too, but I have to believe that they did what they did with good intentions.

I can see why you’re grateful. Your husband was very lucky. Imagine having the weight of the car pass over your leg without breaking any bones! Hope it’s all healing well.

We’ve had much the same here in northern Vermont. I am so tired of shoveling! We have a snowblower but it doesn’t exclude shoveling. I remember that day you mentioned. The wind chill was almost unbearable but I still had to shovel out the access to the mailbox before the mailman arrived. I enjoyed this post because it has been so similar here.

I’m an Aussie and we’ve been having a typhoon. 8 inches of rain in less than 2 hours one day last week. I read somewhere that each inch of rain will make 10 inches of snow. I’ll take the rain. My sympathies for your extreme winter. We hear about it all the time on our news so yes, you’re right, it is worldwide news.