I have serious objections to much of the frugal advice that is being offered these days, especially the focus on quick-fix extreme measures. Extreme frugality is like a crash diet… it’s unhealthy and almost impossible to live with long-term… AND it will set up feelings of deprivation that will almost certainly end in a bout of spending. The money that hurt so much to save gets spent impulsively when you can’t stand feeling deprived any longer… and suddenly you’re back to square one. This yo-yo cycle of deprivation/splurging, deprivation/splurging is not LIVING frugally… it’s PLAYING at frugality… and it’s not a good way to live. 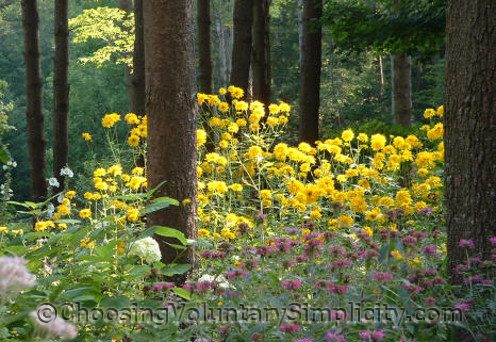 Since many of you have asked me to share more about our own financial situation, I will start by saying that although we have been completely debt-free for many years, our financial freedom did not happen overnight. When our children were young I was a stay-at-home mother and we lived on only one income. Since then my husband and I have always been self-employed and worked together… first working at the brick-and-mortar business we started ourselves, and then working from home selling a product line we developed. I also do free-lance writing. We started our married life with student loan debt and no savings… no family financial help and no legacies… and we had our share of lean times and financial setbacks. Achieving financial security was not easy, but I promise you that it CAN be done.

To the world I imagine our life looks pretty much like anyone else’s. We have a newish car, a nice house, quality furniture, modern appliances, and “things.” However, there are differences that aren’t visible… the house is mortgage-free… we paid cash for the car and the furniture and appliances. We have money saved for future eventualities and we have an emergency fund for anything unexpected that might happen now. We are able to live the life we want to live, do the work we want to do, and spend where we want to spend because we have achieved financial security. Moderation and long-term sensible frugality… while we continued to live a very “normal” life… were the tools that gave us this freedom.

Frugality isn’t some scary unknown that will separate you from a normal existence or deprive you from having good things in your life… and it isn’t achieved by the bouts of “going into poverty mode” that so many people equate with frugality. This yo-yo playing at frugality is not a sustainable long-term solution. A more moderate and consistent frugality is.

I can’t tell you how to be frugal, because my style of frugality will not be the same as yours. However, I CAN tell you some basic principles of frugality that will work for everyone. It’s mostly just common sense…
~ always living within your means
~ limiting waste, and
~ using your resources wisely for YOUR priorities
It really is that simple.

I think the most difficult part of real frugality might even be the initial realization that for most people there is no shortcut to achieving a debt-free life. Unless your income is unusually high, your expenses are unusually low, and you have just been throwing your money away… it is a given that it will take time to pay off debts, build up savings, and prioritize your values. It won’t happen overnight, but if you stay on track, financial security WILL follow.

I’ll share some of the things we personally do (and don’t do) to save money in a future post.

This article is 100% on the mark. Living frugal isn’t a process of cutting everything out of your life that isn’t 100% essential. That’s a recipe for failure, you can’t live like that your whole life. Living frugal means you make changes in your life that improve your finances and that you can live with forever. It really is like a diet, you need to think long term. Thanks for posting about this, this really needs to be said because there is so much misinformation out there.

I keep trying to explain this very point to friends and relatives! Frugality isn’t about “wintering over” in a teepee heated only with downed branches and eating rice and beans for every meal. To us it’s about identifying and then creating a lifestyle that we LOVE and are happy with, that just happens to cost less than we make.

Sure, we’d love to spend the winters on the med.. who wouldn’t.. but it isn’t something that we sit at home and moan about all winter. Who does?

Sometimes I think that there’s a really strange level of expectation built up by our society and the media as to what “middle class” and “acceptable lifestyle” really mean. It seems to lead a lot of people to a place where they feel really deprived because they can’t just have ALL of it. Furs, jewels, the latest electronics and spend the winter in Italy.

But realistically, that has NEVER been a normal lifestyle for anyone but the less than 1% of people worldwide who are “Rockafeller Rich”.

One of the points you made really sticks in my head:

“I can’t tell you how to be frugal, because my style of frugality will not be the same as yours.

What a refreshing outlook in a world where one size tries to fit all. Something I spend money on might be absolutely vital to me but look like a frivolous luxury to my neighbor, and vice versa. So which of us is right? Maybe we both are, and what’s good for me isn’t necessarily good for him.

Thanks for such a balanced post. You are doing good work — I am thoroughly enjoying the rest of the blog as well.

So refreshing and enlightening! seriously my husband and I are 56 I have always worked 2 or more jobs he works full time and then picks up the slack at home.We are mortgage free and close to having cars paid for.But we do not live fancy.Last vacation was in 2007 by my definition we were away for 7 days flew to Florida etc.it was our 30 anniversary and we want to do something special.We get time off every year because our employers have that as a benefit so we use that time in single days around holidays and in the summer to stretch weekends.We are at home either doing projects or just enjoying our house by say having coffee out on the deck.That is true freedom for people who go out the door every day to work.No 1% here,no furs no jewels no Italy for sure and no prospect either.Instead we rejoice over little things like going each weekend to our public market to get local goods,I make soup on sundays to drop off at our daughter and son-in-law’s house because mondays are their long days not home till 8:30pm and nothing like hot soup and a homemade roll to say love and caring.We paint ourselves,we mow our own lawn,clean our own house,do our own laundry you get the picture.I cut my husband’s hair,I go to hairdresser 4 x per year or less if money tight.No frills no fancy smancy life but clean sheets,hot healthy food and close friends and family.What more could we want?

Exactly. Everyone’s needs are different enough that we can’t judge. But, you’re not living is you can’t stop running or you’re so in debt you can’t afford to get sick without losing your job. Don’t know where the current expectations came from but it certainly has destroyed a lot of lives. I agree, going to extreme frugality creates more problems than the lifestyle change is worth. Living within your means and having enough to cover emergencies is what works for real piece of mind. Keep up this fantastic blog.

I jumped in with both feet at first and failed with alot of things in being frugal. I took a step back and started adding one thing a month and it worked better for the household. What may work for me may not work for others around me is my quote. Now I can say that I am not totally debt free and my house payment is less than what my rent was. And who needs furs in todays world, not me. I like to be plain and I get noticed more for who I am.

Really enjoy your site! Will be sharing it on my other sites and social networks. =)

I’ve been lucky to have spotted that I was heading into debt a few months before I did, I still had savings in other accounts when my bank card told me I was broke. There were a few fast fixes that made it possible to save money once again, not going out to expensive places, getting a cheaper plan for my cellphone… and equally important, changing supermarkets.

This reminds me that if we are careful and conscientious about the big things, financially, we may be able to spend less time fretting about the little things. Spending some extra time to get the best rate available on a home mortgage, or saving and then shopping carefully for a good used car one can purchase with cash, will likely do more to help one live within one’s means than a lifetime of saving soap slivers and broccoli bands. That is not to say one should waste things that continue be useful.

Love you information and how you approach frugality. My husband and I will celebrate our 12th wedding anniversary soon. We began our marriage with an Everest-sized mountain of student loan and credit card debt. We were fortunate to both have decent paying jobs (I work part-time now) but it took a lot of conscious decision making to work our way out of the debt. We still went on vacations and spent money on things that were meaningful to us. Now that we are almost debt free (except for the house) we aren’t thinking of all the things we can run out and spend our money on. We have found a rhythm that works for us. There is so much freedom in not being tied to possessions and we really appreciate what we have.

Please keep writing because I will keep reading.