Have you ever noticed how many of the same people who are trying to promote a simple lifestyle make frugality into a negative concept… or how they routinely equate frugality with being cheap or miserly? Somehow frugality has become almost synonymous with deprivation and denial, and understandably, this kind of negative frugality turns most people off. It turns me off too… 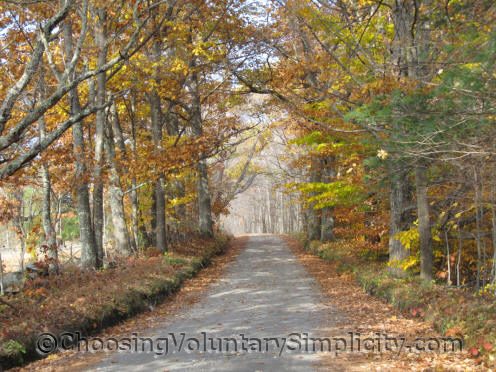 True frugality isn’t complicated… once again, the key is simply finding the balance that is right for you and the way you want to live… only this time the balance is about spending, not spending, and saving. True frugality feels amazingly empowering. When you regularly make conscious and deliberate decisions not to waste your hard-earned dollars on things that have little or no value to you, in favor of focusing your resources on what IS important to you, you are taking control of your life. Sensible frugality is the tool that will help you achieve financial freedom… and financial freedom will make your dreams and lifestyle choices possible. It really IS as simple as that.

You don’t need to drastically change your life to start living more frugally. It doesn’t matter if you live in an apartment or own your own house… if you live in the city or deep in the “boonies,” like we do… if you live alone or have a house full of family… it is almost a certainty that there are areas where you can eliminate waste, make more thoughtful decisions and more deliberate choices. Start small… be consistent… and work toward finding the frugal balance that is the right fit for you.

Your life will only get better.

I love the clarification you make here. Soooo many people don’t seem to understand this distinction. I had my sister snub her nose at me once (when visiting her from out of state) when I bought a healthy, whole grain loaf of bread instead of the cheap, white bread. To her, frugality is about being cheap… Ugh.

Being frugal is living life in accordance with your values. It’s using money wisely. It’s not being wasteful. I feel that I do live a frugal lifestyle but someone recently told me that since my household expenses are more than $50k/year, we are not frugal. A lot of our expenses are not for “stuff”. I don’t think it is nice to judge someone based on how much their household expenses are.

I just found this blog and have been reading some of the posts….

It seems we are on similar wavelengths. I look forward to reading more here.

For me personally, I am frugal in many areas so that I can splurge in others. By being frugal with money, I can splurge timewise on my kid, I can travel my day at a slower pace than if I were more spendthrift. I can save money for things that mean something to us, like trips to see family and friends, or on things we enjoy like computers..

To often I think we are pigeonholed into negative categories, when instead we are simply making other things a priority in our life. Great post!

Sadly the idea of frugality has become a new form of puritanism (which was itself corrupted) where you are supposed to deny yourself. To my way of thinking frugality has to do with being debt free plus a deliberate use of money rather than frittering. I see one of the commenters on another post related frugality to being unplugged from the computer age. I see the computer age with all the gadgets as freeing me to work from home and to put in systems that keep the financial productivity side of work to manageable levels.

You are absolutely on the frugal money. Love your posts and I want to encourage you! Thank you for pointing out that frugality is not only about money, but rather about all of the resources you have at your disposal; e.g., your time, energy, and money to name a few… Love your blog!

I have just recently begun living simply, and your posts have really been helping me get through the struggle of trying to find that balance. So thanks you!

My parents taught me simple living from an early age. Now, it is something I embrace on my own. This was a wonderful post. Thank you for being there, reminding us of how powerful a choice we make every day.

PS: I am going to link to your blog. I think my readers will enjoy!