How To Make Your Own Apple Pie Spice Mix

Reader question… “Thank you so much for the quick response and the recipe for pumpkin pie spice mix. I made some and used it and it worked beautifully. Now I have another question. Can I also make apple pie spice mix and do you have a recipe for this as well?” –Lilith P.

The apple pie spice mix is just as easy to make as the pumpkin pie spice mix and uses three of the same spices… but with different proportions. 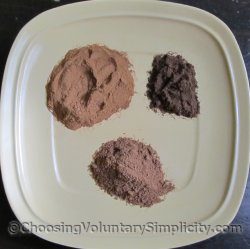 Again, I start with a 1/2 teaspoon base measurement and thoroughly combine these amounts:

Sometimes I add the dash of cloves and sometimes not. Be careful with the cloves, though… they can be very overpowering. Unless you really, really like the taste of cloves, a dash in this spice mix is really more than enough!

… Maybe Your Soul Has Never Been in Bloom

How To Make Your Own Chili Powder

I am happy to receive the recipe for Pumpkin Pie spice, and it has Ginger in it as well I. I always added all the spices by hand, my pie plates are 10 in What would be a rough amount, to add for 1 (10″) Apple Pie and 1(10″) Pumpkin Pie. I use lemon peel and lemon juice and add a teaspoon of Ginger. I generally Flour coat the Apple slices before putting them in the crust. I find the pie juices get thicken. Ginger helps accent the Apple flavor. Some years if it rains a lot you get large apples that have little flavor. In years of drought the
Apples maybe smaller but bursting with flavor. I like Granny Smith apples for baking, and Macouns for eating. GS apples make excellent Apple Sauce and Apple Butter. They don’t break down to mush, so are good for tarts, Cakes and and pies.