Reader question… “My husband wants me to make something called ‘hulled corn.’ He remembers his mother making it but I have never even heard of it and can’t find a recipe. Do you have any idea of what hulled corn is or how it is made?” –Bethany W.

Hulled corn is also called samp and hominy. According to some sources, hulled corn is made from white corn and samp from yellow corn, but the names may simply vary from region to region. Both names originated with the Narraganset Indians, who called the dried, hulled corn “corn samp,” meaning “corn softened in water.” Another name, rockahominy, probably refers to the motion used to rub off the hulls, and was later shortened to hominy.

The earliest methods of making hulled corn used lye to remove the hulls. The lye was made from hard wood ashes soaked in water, using about one quart of ashes to process about one dozen ears of corn. Any mature field corn could be used to make hulled corn, but the harder flint varieties were preferred. Once the corn was thoroughly dried, the kernels were removed from the cob and boiled in the lye mixture for about a half hour, soaked for another half hour, and then washed in several changes of fresh water. The corn kernels were then agitated in a churn with more fresh water, or rubbed under water by hand to remove the hulls. Many rinses were required to remove all the lye. Sometimes the lye was removed by a process called thrash cooking, which involved boiling the kernels, draining and rinsing them, and repeating these steps over and over again. 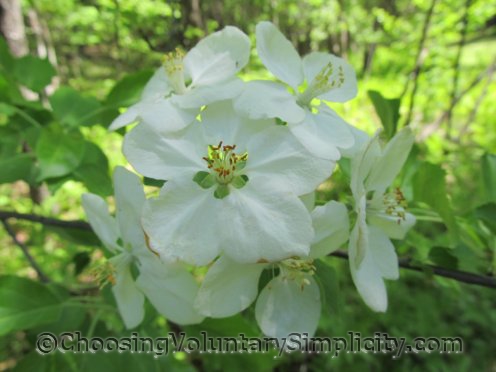 Our plum trees in bloom

My mother used to make hulled corn, but she used baking soda instead of lye. She used a very old family recipe that specifies the proportions of one pint of corn kernels, two teaspoons of baking soda, and enough water to cover the corn. (A pint of dried corn kernels makes about one and a half quarts of hulled corn.) Following that recipe… First the corn kernels are soaked overnight in a mixture of water and baking soda. The next day, add another quart of water to the solution and simmer the water, baking soda, and corn for about three hours, adding more water if necessary. At the end of this time the hulls should be loose and should rub off easily. Drain the corn and rinse with cold water until it is cool enough to handle. Using your hands, rub the kernels together under the water to remove the hulls. The hulls will rise to the top of the water and should be removed and thrown away. After all the corn has been hulled, rinse it well in several changes of water. Cover the corn with fresh water, bring it to a boil, drain, and rinse again. Next cover the hulled corn with water and simmer until it is tender… this will take several hours. Add more water as the corn cooks and the water boils away. I have seen recipes that mention canning the hulled corn, but my mother told me that because they always had dried corn kernels in storage year round, she just made small batches of hulled corn fresh when they wanted it.

In most parts of New England, hulled corn was served as a vegetable or as a breakfast food and was eaten with milk and salt. In other areas, it was used to make a samp porridge, which was basically a combination of hulled corn and dried beans, cooked with meat. The early settlers made a type of “succotash” using hulled corn, meats, and various vegetables. My father especially loved having a bowl of hulled corn with milk, and my mother told me she always liked to eat it that way too. I have to be honest… I don’t remember having any special liking for it myself!

I love hominy. I like to fry mine in butter with a little salt and pepper, yummmm. My husband hates it, but now that I know how to make it, I may go and find some dried corn. Thank you!

This is Bethany. I asked the question about hulled corn. I just wanted to tell you that we did go ahead and make some hulled corn and my husband was so pleased. I have to agree with you though, it isn’t something that I like overly much, but he loved it and he wants me to make it again.

Samp is an old family tradition of mine (Long Island, NY).

We can still get it in it’s prepared form (dried cracked corn). I get it at a local country store.

I don’t have a real recipie, but we had it as a kid by soaking it over night then adding pepper and salt-pork. I can see beans added as well. I remember adding lots of pepper and salt when I ate it as a kid, as it is pretty bland.

I live in south africa and we make it as a traditional dish. The best tastiest way to cook it is to buy the samp, cook about 1.5 cups with about 6 cups of water in a pressure cooker with a chicken stock cube for about and hour and 40 mins until tender. Then drain it in a collender.
Next in an ovenproof pan with lid, fry some mushrooms and chopped leeks in butter ( u can also add a bell pepper or small florets of cauliflour) then when that is tender aDd the drained cooked samp. Grate in a cup or two of cheese and add 250ml to 300 mls of freash cream. Add some salt and pepper stir and then cover with lid and put in oven at 180 deg centigrade for 25 mins. Yummm

My 9 year-old daughter and I are reading together “The Little House in the Big Woods” by Laura Ingalls Wilder. The author beautifully describes how people used to make hulled corn in the 1800s. We were both amazed. I loved Shirley’s posting and cannot wait to try her recipe. thanks for your time and attention to detail.

I teach agriculture to emerging farmers and was interested how to use the baking soda instead of lye on our maize to nixtamalise and create samp.
Thank you for the advice

Charmane Nel your dish sounds delish, it’s one I’ve yet to come across. I live in Zululand so it’s in ample supply. We just eat it plainly, a bit like the Zulu way I guess. I’m doing some today…. soak it in water for a few hours or overnight, then boil it. Lovely with butter and salt. We often add Jugo beans or sugar beans or a combo of the two, then mix it up with a curry sauce loaded with onions and sometimes meat. Yum I have to avoid gluten so Samp, Mielie Meal or Maize Rice are brilliant and healthy alternatives. Maybe overseas people could find it in a South African shop.

Charmaine Nel and Sampelicious, I also have to avoid gluten, so thank you for your ideas for samp. They both sound delicious, will try them. I’m presently living in East London, SA.

having grown up in the state of maine circa 30’s-40’s our sunday treat was called “steamed hulled corn” with milk,sugar etc. sold out of a panel truck, a door to door sales. if anyone is familiar with the steaming process i would be grateful for info regarding the process. thanks

I know SAMP Which is made out of white maize. During the process maize is put in the crushed called (ingiga) in my language; Ndebele then add a little water but not too much, this allows the maize to cast out the skin without breaking it to powder before the skin comes off. Keep on pounding until you are certisfied that most of the maize is without skin. Pour out the maize and let it drie for few minutes, use a wide container (ukhomane)like tray to remove the skin from the maize. Return the skinned maize to the crushed, crush the maize to rice like particles but not too small instead leave it in a state where it looks like you’ve crushed in the centre or in three parts. Make sure you remove the powder (impuphu)that’s formed in the process because you don’t need it at the moment. Then cook the samp with enough water, add small amout of salt, monitor the untill the samp is cooked well cooked, add salt the way with any stew that you like or you could put peanut butter.

I’m from Georgia but my mother was from New York and she called it hominy. She boiled it with butter, salt and pepper. It was very bland. My husband, who’s from Georgia and all his family as well, has only ever heard of hominy grits. I’m interested in trying this (because mom always bought canned hominy) because I like growing old plants and intend on adding flint corn. Thank you for sharing.