Home » Simply Personal » It Has Been Quite a Morning

It Has Been Quite a Morning 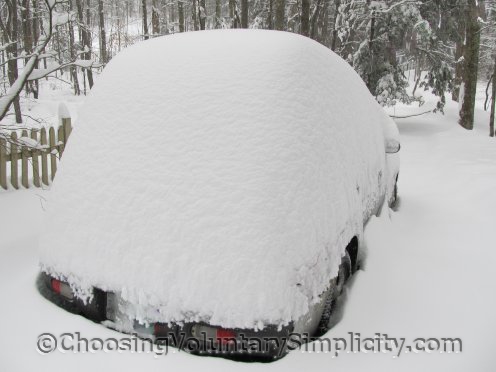 It has been quite a morning. We woke up sometime after four a.m. to an unnaturally cold house because one of our two furnaces had stopped working. It took nearly two hours to fix that problem. Then we discovered that some of the water pipes had frozen overnight. Thawing THEM took even longer.

When it became light enough to see outside, the thermometer was registering just under twenty-seven degrees below zero (Fahrenheit). Alerts for this area warn that “dangerously cold wind chill values” drop the perceived temperature to as low as fifty degrees below zero.

It was another surprise that everything was covered with several inches of new snow because snow wasn’t in the forecast. Apparently it snowed after it got dark last night but before the temperature dropped so drastically.

Anyway… the water pipes have been thawed, the furnace is working, and the house is finally warm again. We have decided, however, that any shoveling and snow blowing can wait until it gets a little warmer…

The weather people promise that the temperature will be rising to at least zero degrees Fahrenheit by noon… :o)

Can You Help Me Identify This Hosta?

The Easiest Boiled Frosting Ever

Weathering the same cold snap here this morning. The car made a mighty funny noise when I started it at 5 a.m., but it did start. The bright sunshine outside is deceiving! It hasn’t reached zero yet…

Glad you got everything working. I’m dreaming of June.

We’re freezing here too. The kids are home today because the schools were closed. Someone said we’re setting records for wind chill and low temperatures. All I know is that I don’t like the cold! This is my first winter with snow. I grew up in Texas so you can imagine the shock I am feeling. I’m glad you got everything fixed.