I have been making egg noodles for years and years, but extruded pasta has recently become an unexpected addition to my “making from scratch” repertoire. We don’t eat a lot of pasta, but some of our favorite “comfort foods” are pasta based and need the variety of pasta shapes to taste the way they should. So although making extruded pasta wasn’t really something I wanted to add to my list of things I HAVE to do on a regular basis… once again the manufacturers’ addition of soy made the decision for me. 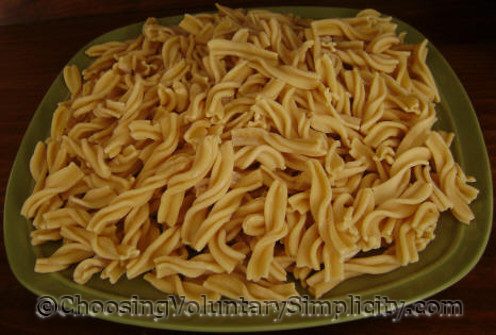 I spent a considerable amount of time looking for a pasta extruder. I thought I wanted an electric model for convenience… the type where the machine mixes the dough and extrudes the pasta shapes automatically… but I also wanted it to make better pasta than the machine I purchased and returned several years ago. I read reviews and found that the newer machines apparently have the same limitations and problems… unless I was willing (and I was not) to pay several thousand dollars for the “professional” models that were getting rave reviews. 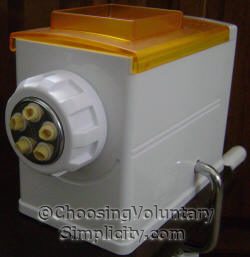 Then quite by accident I came across a recommendation for an inexpensive, no-frills, hand-cranked pasta extruder that almost all of the reviewers seemed to like… a lot. The only negative seemed to be that it takes a bit of muscle to turn the crank. We didn’t think that would be a problem for us, and happily it isn’t. Our little pasta extruder works wonderfully well. It has five different dies to make five different shapes of pasta. We can make fusilli (the spiral in the top photograph), large and small macaroni, rigatoni, and hollow spaghetti, and we can make the pasta from any recipe we choose… unlike some of the electric extruders that only work with one specific recipe. We especially like the hollow spaghetti, both as long spaghetti and cut into lengths for longish elbows.

I mix the dough for the pasta in the food processor, choose the die for the type of pasta shape I want to make, and push small portions of dough down into the hopper while someone else turns the crank. When the extruding pasta has reached the desired length, I use a sharp knife to make a sweeping cut downward. The finished pasta falls onto my glass cutting board that I have lightly dusted with flour. We have found we can make all the pasta the same length by turning the crank a certain number of times before making the cut. 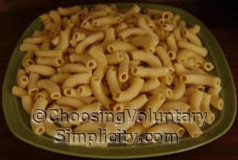 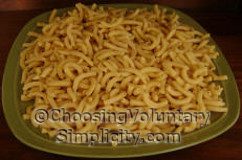 Obviously making pasta isn’t as easy as just opening a package or box, and making one batch just before a meal doesn’t really work well for me. Recently we’ve been making several batches at a time and extruding different types, usually making four two-pound batches at a session. We freeze the fresh pasta in meal or recipe-sized portions. Having pasta waiting in the freezer has really helped bring back the convenience of a quick pasta meal.

Enough is enough, though… four batches of pasta is really about as much cranking as is fun to do! :o)

The Spring Will Come

Many People Will Walk In and Out of Your Life…

This is lovely! I so enjoy hearing practical advice and the “less is more” approach.Many of us can not afford the professional expensive choices.Would you be willing to share the brand of this machine and where you were able to purchase it? I for one would be grateful.It is one more thing to save money,have fresh pasta in freezer and could be used as a gift.I work 2 jobs(since 1993) and try to save in any way possible.Love reading your ideas and try to emulate whenever possible.Thank you for great inspiration!

Pam, here’s the link. We’ve had a lot of fun making extruded pastas and trying different flours (my favorites are whole grain and multi-grain pastas) and adding spinach, tomato, squash, etc. It’s just so amazing to see these perfect pasta shapes coming out of the dies. I agree, pasta would make a nice gift… maybe a combination of spinach pasta and tomato pasta for Christmas? :o) And thank YOU for the kind comments and your interest in my blog!

I have to have this extruder!!!!!!!!!! I already telephoned my husband and told him what I wanted for my birthday next week. He was “You want to make macaroni”? I can’t wait for him to get home so I can show him this. Thanks so much for your wonderful ideas.

This is amazing. I didn’t even know that it was possible to make pasta that looks like this. I was gifted one of those electric machines and the pasta was not good. All sticky and the shapes were undefined. I thought all extruders were the same. Thanks so much for sharing your life. You are an inspiration.

Now, that looks worth a try. Mine does NOT work that way and I stick to the simple pastas.

Hi, just saw you got some help making pasta lol. I was lucky to get a pasta maker myself from my aunt who garage sales for a living. Its a pasta perfecto made in the early 90’s it actually mixes everything for you then extruded it into whatever shape you have on the attachment. I couldnt live without it. So sorry they started adding things to pasta you cant have. I read somewhere that the FDA said we dont have the right to eat whatever we want, so its no suprise they put additives in everything.

I am just starting making my own pasta. I have the pasta extruder you mentioned. My question is after you crank/form the pasta, can I put it in a sealed tupperware container or plastic bag and in the refrigerator until I’m ready to cook it, or do you have to crank it right before you cook it. I am wondering if this is something I can do in the morning so it’s ready for a quick dinner in the evening. I have read you can crank/form them and freeze them immediately, but wasn’t sure about them being the fridge for several hours.
Thanks!

Julie, you certainly could store your already made pasta in the refrigerator for a short period of time… I believe the usual recommendation is less than three days. I freeze our pasta immediately and cook it straight from the freezer.

Would you be so kind to share the brand of the machine. It looks like a fun project to do with my grandaughter who I am teaching to cook

Diane, there is a link in my answer to an earlier comment, but here it is again. I will also add a link in the article itself.

Hi, there! I love that you make pasta from scratch; I’ve done it this way for years, and it is absolutely superior to anything you can purchase. I have a question about your extruder: is there a die available for making penne? I love using it, but I have to buy it and would much rather do it at home.

Krista, I thought that there were additional dies available, but I have searched through the papers that came with our extruder and can’t find any… so I guess I have to conclude that I am confusing this extruder with one of the others we looked at before we made the purchase.

I have this extruder too, but when I cut the shapes, the hole close shut, and I have to take a toothpick to open each noodle individually? This is not a long term solution….suggestions?

The holes in the noodles will collapse when the dough is too wet. Try adding more flour… a very small amount at a time.