Mock Maple Syrup — Made From Potatoes

Recently I have been looking through some books I hadn’t read in a while, and in a little book about their life in the wilderness by Bradford and Vena Angier, I came across the chapter where they write about making a realistic tasting maple syrup from potatoes and sugar.

It’s an interesting idea, isn’t it?

This recipe really needs to be followed exactly to achieve the real maple syrup taste. The water used must be only the water in which the potatoes have boiled… adding plain water to a smaller amount of potato water to make up the measurement just will not work and the taste will not be the same. 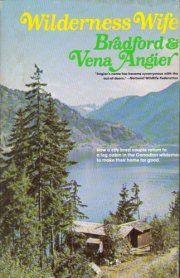 Peel 6 medium sized potatoes. Boil these uncovered in 2 cups of water until but one cup of fluid remains. Remove the vegetables for use any way you want. Stirring the liquid until it reaches the boiling point again, slowly add one cup of white sugar and one cup of brown sugar. Once this has entirely dissolved, take the pan off the heat to cool slowly.

… But bottle the syrup and tuck it away in a cabinet for several days to mature. Taste it again at the end of that time and see if you are not pleasantly amazed.

We were still amazed that morning. The flavor was almost beyond comparison, a phantom bouquet that haunted our taste buds; something to be savored very deliberately and lingeringly. It tasted to us now exactly like prime maple syrup, and we’d both been reared in maple syrup country.

–from the book Wilderness Wife, by Bradford and Vena Angier

Some observations and additional notes:

If the potatoes are excessively starchy, let any starch settle to the bottom before pouring the potato water off from the top. This keeps the syrup clear.

This syrup is so good and so inexpensive compared to the store bought stuff. I would have never imagined syrup from potatoes! The only problem I have with it is the sugars crystallize when the syprup cools. What do I need to be doing different?

It IS good, isn’t it… and everyone who tastes it is always so surprised that it is made from potatoes. I have not had a problem with crystallization, but when I reread the Vena Angier instructions on making this syrup that I posted, I realized she said to boil the liquid and then add the sugar. When I made it, I added the sugar, stirred until the sugar was completely dissolved, and then boiled it. I think this might make a difference.

I forgot the potatoes while they were boiling and most of the water boiled away. We ended up eating those potatoes for dinner but if I do this again can I just add enough water to make the one cup, or is the boiling part important?

Sandi, I’m almost positive that would not work and that there is something about the boiling process and the potato starch that plain water added to the concentrated liquid would not duplicate. This is one recipe that really needs to be followed exactly or you won’t get the same results.

I’m excited to try this! Thanks for sharing.

I am so excited to see this. I do make my own but it takes 4 cups of sugar. That seems excessive and I would love for this to work. Thanks

What is the shelf life of this syrup? Does it need to be refrigerated? I’m really looking forward to trying this! :)

Stephanie, the only place I’ve ever seen this recipe is in this book, so I have no idea about shelf life… but I think the recipe probably only makes one cup of this syrup for a reason. I would not make a huge batch and expect to store it. I definitely also would refrigerate it after the first “curing” time.

I tried this recipe last week and it is delicious! I was pleasantly surprised. The next time I make it, I’m going to try adding a tablespoon or so of lemon juice to keep it from crystalizing.

Betty, I don’t think it matters. Whenever I have made this syrup, I have always used ordinary white potatoes.

Exactly how big is a “medium” sized potato? Anything that you could compare it to? Also, do you boil the potatoes whole or cut them up. Two cups of water for 6 potatoes doesn’t seem like it would be enough. Thanks. I am eager to try this recipe.

Debbie, I never thought about that. :o) To me, a medium potato would be somewhere between the size of a lemon and a small orange. I don’t think it matters if you cut up the potatoes or leave them whole. If you use a small saucepan the two cups of water will cover the potatoes… or at least it does in the small saucepan I use.

I found the same recipe in the same book a couple of years ago and tried it. It really is amazing. I made a batch in October and forgot about it in the fridge, then broke it out in April and it seemed fine to me. Tasted fine and didn’t seem to have separated or anything. Also, I didn’t have a problem with crystallization, even after adding the sugar to boiling water.

I read this book in the late 1970’s I think, made the syrup and loved both the book and the syrup.

I had that book and lost it, so I’m very happy to have found this online. A little extra you could do, if you want it to taste like butter flavored Aunt Jamima, is add some liquid butter flavoring. Also yummy. If I told people about the recipe, ewwwww potato water. If they had some and then told them, they were amazed.

We own Wilderness Wife and I’ve made this before a few times. It is amazingly good! Our only issue now is using up six potatoes for just the two of us.