We’re really enjoying our unexpectedly huge crop of apples… I’ve been making a lot of apple crisps and making and freezing applesauce. I have also been freezing apples for pies and freezing sliced apples in bags. I do put cinnamon and sugar in the frozen pie fillings but I always freeze the apple slices without sugar so I can use them in any recipe requiring fresh apples. Most of them will probably be turned into oatmeal apple crisps! 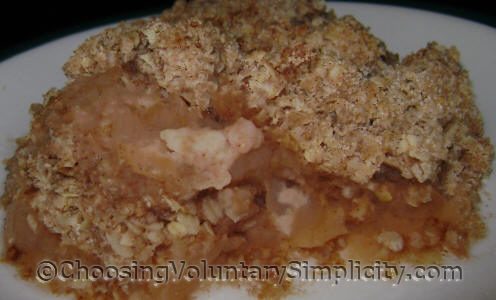 Our apples are somewhat tart, so I toss them with a small amount of sugar. I use half light olive oil and half butter instead of the all butter in the recipe, and there is no discernible difference in taste. I also add a half teaspoon of vanilla to the rolled oats, sugar and flour mixture.

Put apples in pan. Combine dry ingredients. Add butter and mix until crumbly. Sprinkle over apples. Bake at 375°F until apples are cooked and the topping mixture is golden.

I have tried many apple crisp recipes, but this oatmeal apple crisp has always been our favorite. I think it has an especially nice blend of flavors.

My Favorite Methods for Cooking the Perfect Hard Boiled Egg

There Was a Slight Problem With Yesterday’s Mail Delivery

wondring about using frozen apples for the apple crisp and again, to thaw before baking or not….

Frozen apples work great in this, but definitely do NOT let the apples thaw first. Thawing makes for too much liquid. I freeze apple slices on a tray and then transfer them to large bags once they’re frozen so later I can take out as many slices as I need.

I’m in complete agreement about what Shirley says about not letting the apples thaw first. I always used to let them thaw and I thought that any dish made with frozen apples had to be soggy. Then I found this site and the post about freezing apples for pies and tried Shirley’s method (which by the way works wonderfully.) Just remember to cook the apples in their frozen state and a pie or crisp will be just like using fresh apples.

I made this last night and it was really good. Thanks for sharing your recipes. I wanted to tell you that I find your instructions very easy to follow. I’m not a cook but I have made several of your recipes and can’t believe how good they have turned out.

My husband and I embraced voluntary simplicity two years ago in order to take early retirement and we have never been happier! I really enjoy your website. Our tip for freezing apples is to leave the peel on. It saves time and makes a “rustic” crisp that is even healthier for you. We feel less guilty eating the whole pan, lol!

You can use frozen apples, SLIGHTLY thaw first, then strain before using apples. (I used the microwave.) This is an awesome recipe, thank you!