I hadn’t realized there was a huge fat toad sitting beside me because his color blended in so well with the dead leaves he was sitting on. I had been kneeling at the outside edge of our mulch pile for the several minutes it took to fill a container with mulch. This toad was almost touching one of my knees, but he didn’t move until I started to stand up.

This toad’s large size was so impressive, I went back to the house to get the camera and a ruler. I was pretty sure the toad would still be close to the mulch pile when I got back… and he was. (Toads just love our mulch piles!) The toad sat calmly while I held the ruler next to him to measure his length… a whopping almost seven inches… and he posed obligingly while I took several photographs. 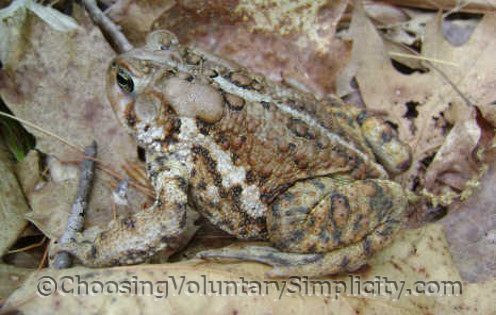 That first encounter was three summers ago, and this toad still lives in the areas around the mulch piles. We see him almost every time we go near there… he is easy to recognize because he is almost twice the size of any of the other toads. And although the largest toads are usually female, we think this one is a male because he does not have the rougher skin or the pointed dorsal warts that female toads typically have.

We thought such a massive toad needed a name. Old Mr. Toad… a name taken from the Thornton Burgess books… seemed like an appropriately dignified choice!

Why I Avoid Soy

Autumn is the Eternal Corrective

Ohhh! I would so like to have toads in my yard. I’ve worked for years to make my yard wildlife friendly, and the birds have really responded, and a few snakes, but alas, no toads.

My grandmother had a ginormous old toad living under a rock pile at the edge of her garden for years and years. He was one of the first things I’d look for when we’d visit her. I’d love to recapture that sense of delight I always felt upon verifying his presence.

Awesome pic !!! A dignified name for a dignified looking toad. I remember the Thorton Burgess books from when I was a child. My father used to read me one chapter from one of the books every night before I went to bed. Eventually we had accumulated the entire set. I wish I had them now for my children. Thanks.

I would so love to have your gardens. You have such amazing flowers and wild creatures. It must be a paradise of nature. Thanks for sharing, I do love your blog and I wish I could know you.

I read somewhere that the presence of toads and frogs means the environment is in good shape, so I think your gardens and landscaping must be doing good things for your area. That’s one enormous toad! We have small ones around the yard here but I’ve never seen one that big, I really hope I do someday. Thanks for giving us a glance into your life through your blog, I enjoy it alot.

Thanks for your panegyric to toads. I’ve always thought they were really cool animals, and yes, outdoors where they can eat bugs is the best place for them. In Hawaii, we have these whopper Bufo marinuses, aka cane toads. The females may get to 7″ long and are quiet. The smaller males make a sort of sound that’s pleasant to hear on these warm summer nights. Anything that eats roaches and swarming termites is welcome in my yard.

Thank you for the plea to people not to keep toads or frogs as pets. I routinely have to educate the children in my neighborhood that it traumatizes toads to be grabbed, carried around and handled. They do not do well in captivity and it is surely cruel to capture them and take them out of the environment in which they evolved to live. Enjoy nature as it is…and strive to fit into it and not force it to conform to you. I love your blog!