One day last week I received a very interesting message from a reader named Kirstie. Kirstie is originally from New Zealand, but she and her husband and children have recently moved to the United States because of her husband’s job. She wrote that she especially noticed several of my posts mentioning that we are eating less and less meat because her family is also trying to cut down on meat, partly for health reasons and partly because of the expense. She sent me her description of a method she uses to stretch ground beef in a recipe and asked if I would share it with all of you. 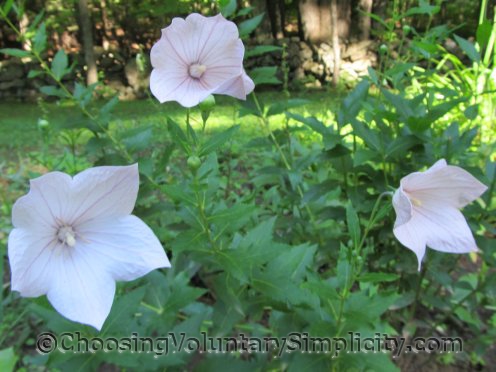 Balloon flowers growing in front of one of our stone walls

Here’s what Kirstie does. For every pound of raw ground beef, Kirstie mixes in the bread crumbs made from one slice of fresh bread, one egg, and up to one cup of finely chopped or grated vegetables. Sometimes she uses a combination of several of the following: mushrooms, carrots, onions, celery, eggplant, and capsicums (green peppers) and courgettes (zucchinis)… or sometimes she just adds a full cup of one of the raw grated vegetables. She cooks the meat and vegetable mixture until the vegetables are tender and the meat has lost its pink color, breaking up the mixture the way you would if you were cooking plain ground beef. She packages this meat mixture in recipe-sized quantities and freezes it. She uses two cups of this mixture for every pound of ground beef called for in a recipe.

Thanks for the hint, Kirstie! And now here’s a question for all of you. Kirstie is looking for other ideas for stretching meat in a recipe or for making meat-including recipes minus the meat.

Does anyone have a favorite method or idea they would share?

I’ve been doing this for years, but I was cooking this way to seek in vegetables to meals. LOL

I often cut sugar back in recipes. No one even notices the difference.

I stretch ground beef with lentils, about a 1-to-1 ratio. I cook the lentils first, according to the directions on the package, and make sure they’re well drained. Then I mix the meat and the lentils together with my hands. Divide it into packages in convenient amounts, put ’em in the freezer, and you’re done. When you want to cook the meat, just cook it normally. Believe me, nobody will notice the difference.

This may not be the kind of method people are looking for, but I’ve found that the best way to reduce the amount of meat I eat is to cut it out of some of my meals altogether. Instead of trying to extend ground beef for a spaghetti sauce (for example) I make a meatless spaghetti sauce instead. Meatless dishes can be very delicious, especially after you get used to the idea that every meal doesn’t have to revolve around meat.

I use shredded cabbage in my sloppy joes. Once cooked you can hardly tell the difference but it does add a nice tangy texture and taste. You also get your veggies in.

I often use oatmeal or other ground grain to my meatloaf, along with the egg and veggies (I’m another that sneaks veggies into everything). Also if you have a juicer, use the pulp in everything from soups to muffins and meat dishes.

In France lentils (the Puy variety, if we are feeling flush) are used extensively to strech meat. In ragu sauces they blend in superbly. We had a glut of courgettes and peppers this year and fried these off with onions in practically every meat dish we cook, which had the added benefit of getting more vegetables into the children.

The BEST meatballs are made with less than 50% meat :)

I got this recipe from my grandma, and it’s just the best ever….

greetings from the netherlands

I second the lentils. You can also use TVP at a 1-to-1 ratio.

Lots of good suggestions here. Thanks for sharing your ideas!

Linda, thanks for sharing your grandma’s meatball recipe. It sounds like a good one to try.

I always use wheat bulgar instead of ground meat. It is great in chili and spagetti sauce and other similar dishes. Also we use cauliflower in spagetti sauce and spinach in lasagne…I don’t even miss the ground beef now…don’t like it anymore.

OK heres what i do for ground meat in dishes, i use a half pound when it calls for a pound. I’ve been doing this for the past 10 yrs or so. It seems to be enough for myself and my husband when i do this. People still cant believe that i still do this after all these years and they try it out in thier households and thier family doesent have a clue lol.

A combination of wheat bulgur and wheat berries has a very similar texture to ground meat in my opinion. Works great in a vegan chili. Both are cheap when you buy them bulk. The wheat berries take a while to cook but a pressure cooker cuts the time quite a bit.

Thanks for this post! I love Kirsten’s method, and there are several other great ideas here I can’t wait to try!

my grandma has been stretching her ground meat with oatmeal since the 1950’s. With 5 children it was a necessity :)She uses about 3 parts meat to 1 part oatmeal.

Great Ideas! Thanks everyone. As a new frugal-er (is that a word?) I am excited to try my hand at making my own breakfast sausage today. Now I have even more new ideas to try. Beef prices have really gone up so I have been searching for ways to save money on our food bills. Awesome!!!