Yesterday I needed six eggs for a sponge cake, so I opened one of the new boxes of “farm-fresh” organic eggs that my husband had purchased on Friday. As I cracked the first egg, a lot of clear liquid came pouring out, and I noticed immediately that the gelatinous part of the egg white was cloudy and excessively thick. It all was pretty disgusting, so I discarded that egg and cracked another one.

The second egg was equally unappetizing… as was the third, the fourth, the fifth, the sixth, and all the other eggs in that first carton. Some of the eggs had oddly flat, pasty yolks. Others had yolks so thick and rubbery, they literally would not come out of the shell. All of the eggs had an amazing amount of clear liquid and cloudy, milky “whites.” 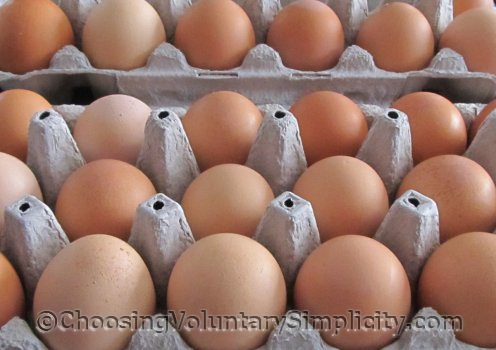 The cake I was trying to make was for a special event, so I really needed the eggs. Unfortunately, the only eggs I had were these just-purchased organic eggs… five dozen of them! I kept cracking eggs and looking for a normal yolk and white. More than four dozen eggs later, I still had not found one. I didn’t crack the last few eggs because by that time there was no way I was going to feed my family eggs from this particular farm.

I was really “grossed out” by the condition of these eggs, so I did some Internet searches for a possible cause, and I was surprised by how readily substandard eggs are accepted as normal. Some people even said that a clear liquid in an egg indicates that the egg is organic and “really, really fresh” (but they are, I think, confusing the clear gelatinous “white,” which is desirable, with a clear liquid, which is not). Up until the last two years, we have always had our own hens and our own eggs, so we have years of firsthand knowledge of what eggs are supposed to look like. Eggs that come from young chickens, from old hens, or are freshly laid, or have been in the refrigerator for a while, were all listed as possible causes for watery whites and rubbery yolks, but this is not normal. There ARE degrees of normal, but if an egg has excessive liquid, or if the gelatinous part is a strange color, or if the yolk is thick and rubbery… even if the egg does not smell bad… there is something wrong with the egg and it should not be eaten… even if the eggs are labeled organic, like these were. These eggs were so abnormal, I am guessing that the entire flock is diseased, or living under stressed conditions, or consistently being fed something that might qualify as organic but is not good for them. Something is seriously wrong. Healthy hens do not lay eggs like that.

These eggs were purchased at a natural food store and came from a small local farm operation. The eggs had supposedly been candled for quality, which is puzzling to me because candling would have quickly shown larger than normal air sacs in all of these eggs… which would have indicated something abnormal right away. The boxes also had the usual organic and USDA labeling and certification. It’s disillusioning to discover once again that labels often don’t offer the protection that they should.

I have noticed the same thing and I’ve had to throw away some organic eggs. The only ones that seem to be pretty good all the time are the organic eggs sold at our Target.

I was just talking to my husband about organic fruit and produce. He buys a few items at the health food store for his special diet and they look horrible. I’ve had to tell him that just because something is organic does not mean it is fresh or healthy for that matter.

Our local grocery store has started carrying more organic produce at good prices. They always look decent (as opposed to brown and withered from the health food store). They are a state wide chain so I expect that have the ability to find very good organic farmers, as well as local.

Hello,
It would be interesting if you could find out from the source (the small local farm operation) what the problem might have been…diseased flock, very old eggs, etc.) Was there a Julian date on the cartons? Strange that all of those dozens of eggs were bad. Odder still that a small farm would sell them as they were. My local health food store does not sell eggs due to slow turnover of the stock.

We are working on raising our own healthy foods, including meat chickens and layers. Pretty new to this, so I have much to learn about keeping livestock. Would love to find out what happened.

Hi,
Ugh, those were the signs of old eggs or eggs not properly stored or candled. Those eggs were definitely not fresh. You should return the eggs back to the producer/store where you bought them.

Just read your post and thought I’d put in my two cents. As the director of a natural foods co-op, I feel that everyone should know that if you are choosing to “go organic” when you buy groceries, it is going to be “buyer beware” in many cases. (Knowing the sad side of human nature, we have to expect that at least a few of the suppliers out there are simply capitalizing on the latest food trends.) You will have to have to take it upon yourself to be informed as to what to look for as marks of quality in foods and not just to take a label at its face value. Our grandmothers knew how to read an egg for freshness and we can learn alot from the cookbooks from that era. When you buy farm-fresh eggs, first, look for cleanliness. If you see even one soiled egg in a carton, don’t buy it. (Now I’m not talking about small discoloration spots, I’m talking actual dirt or feathers stuck to the shells.) Next, if you have any concerns about the freshness, put them in a bowl and fill the bowl with cold water till eggs are completely covered. If they are fresh, they should sit firmly on the bottom of the bowl. If any of them completely stand up on end, make egg salad out of them, but if you find that one floats, discard it immediately (and carefully – peeeyoooo!). And thirdly, our elders knew to never crack an egg directly into their batter or frying pan – always crack them one at a time into a white saucer first to check for quality, and then add them to your recipe. Trust me -it will save you time and frustration, and you’ll be sure to have delicious, high quality food to put on your table!

Hi. I have raised chickies for the past few years and sold at the farmers market each week. To help support other farmers, I would buy their eggs sell them. One lady had 5 dozen for me. When I took them out of her box to put in my fridge, several were cracked and sticking to the cartons. They had been exposed to freezing temps in her refrigerator. The yolks were rubbery and the whites were runny. I’m guessing the dozens of the farm fresh eggs above were frozen then thawed.

I, too, am curious as to the cause of these abnormally thick egg whites. I know it is not an infectious disease (only one of my hens does it but has from day 1) nor is it improper storage of an egg (I gather as soon as they are laid, several times a day and have immediately cracked hers in an effort to see if *I* was doing something wrong).

I’ve begun to suspect that she keeps a fertile egg ‘in the chute’ for abnormally long periods of time when compared to my other hens. She’s reportedly from good stock, though! I bought her from a breeder I know personally and trust who raises from good lines. *shrug* Tis a mystery to me! I’ve yet to try one of the weird eggs, though. I don’t trust ’em.

ive had this problem as well with eggs from my moms hens, eggs that are fresh! it hasnt always happened, but recently ive moved and my refrigerator has some cold zones, and that is what i have suspected as far as over-gelatinous whites go, that they have frosted and then thawed out. i havent had any issues with using them for scrambled eggs, but im not sure i would use them for baking since baking is a much more sensitive art. however that being said, i know one of the preservation methods recommended for long-term storage of eggs is to freeze raw scrambled eggs to use in baking, not for regular eating, but ive never tried this so i dont know what the results are personally.

I got backyard chickens last year and I was puzzled as to why the egg whites were so much thicker and cloudy than the shop eggs I was used to. I looked it up and found that in very fresh eggs the egg white is firm and quite viscous so the yolk is firm and well-centered, and the white may seem cloudy, due to the presence of carbon dioxide that has not yet had time to escape. As the egg ages, carbon dioxide passes through the pores in the egg shell, and the white becomes clearer. Makes sense since I gather the eggs while they are still warm and use them within a couple of days. So now when I crack an egg I use a teaspoon to get all the egg white out of the shell.

I just bought some organic eggs from a box store. Their items are usually very fresh.. I cracked an egg into the frying pan this morning and the white was milk white like it had been cooked but it wasn’t. I had to throw it out. I cracked another and it was the same as the first and had to throw it out. I ended up cooking eggs I knew had clear whites. Why the milky whites? It just isn’t appealing. I had chickens years ago and I have never seen an egg like these.

Thin watery whites usually mean that the flock may have blackhead which is a disease carried by mosquitoes (very common). Since organic farmers do not use medicated anything like the commercial producers do they are more susceptible to outside flock disease. Chickens that are truly organic and free range have access to things they should not be eating and can sometimes get sick as a result or it will show in their eggs. I usually have a few issues during weather extremes and winter. If eggs are not kept out too long their whites and yolks retain their integrity.