We were hearing an unfamiliar bird sound. Baby crows often make a similar racket, but this sound was different somehow… softer and less harsh. It was coming from the dense vegetation surrounding the brook in the field adjoining our property. Oddly, the sound seemed to be getting closer. 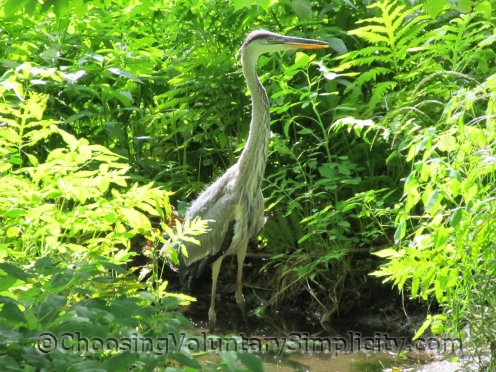 And then we could see movement, and this great blue heron stepped out of the bushes and started to walk toward us. These birds are huge. This one was close to four feet tall when he stretched his long neck, but from the colors of the head and beak I think it was not an adult bird. He continued to move nearer and nearer to where we were working, stopping now and again to stare intently at us. 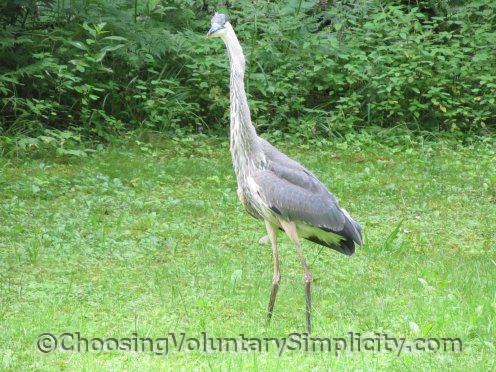 For the last five years blue herons have been around here every summer, but always just one at a time. They show a great interest in our brook and ponds, and I would guess the frogs and minnows, so whenever we see them, we always try to encourage them to go somewhere else. All the herons we’ve seen over the years have been very reluctant to leave, but usually they will fly away if we move in very close to them. 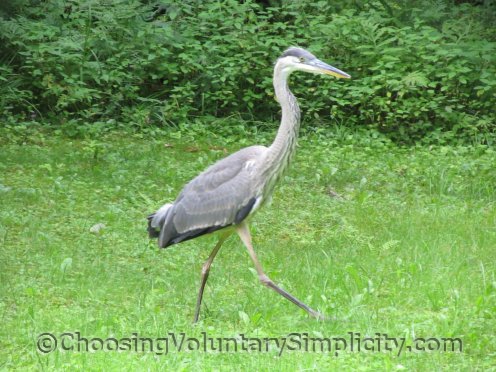 Except for that one year and that one heron who didn’t fly away… and instead started running… right at me!

Appreciating the “Now” of My Life

We live near a wildlife rehabilitator who sometimes brings rehabilitated birds/foul to our pond. This year she brought us a great blue heron who had a broken wing and could not fly. When we got too close, he would just saunter into the woods. I named him Harold, and became very attached to him. Unfortunately he had more trouble and had to be put down, but he had three good months of freedom with us, and the experience has encouraged me to volunteer at the wildlife center. Great blue herons are special indeed!

I know that sound. We’ve been hearing it coming from the marshlands here. I found an audio of blue heron calls after I read your post and sure enough we must have blue herons down there. These pictures are very nice, very clear. Thank you for this blog. I am a regular reader.

One of these flew over us once. My neighbor was standing with me and she started screaming that the bird was going to attack us. It didn’t of course but it is awe inspiring to see one of these huge birds in the air flying. I was surprised that they don’t fly very high but that is probably because of their weight don’t you think? Nice article and photos.

Ugly but beautiful at the same time. We have had 2 great blue herons visiting here this year. I had never seen one before and looked them up. I took some pictures but mine weren’t nearly as good as yours. I was afraid to get too close so thanks for the clarity in yours.