Home » Doing It Ourselves » This Is Our Stone Path

This is our stone path. It is 55 feet and 9 inches long and seven feet wide and follows a gentle curve from the picket fence gate to the back steps of our house. The picket fence and the large hosta gardens on both sides of the path create a “courtyard” area that we absolutely love.

My husband and I built this stone path ourselves, using ordinary rocks that we had previously dug from our property. None of the rocks we used are pavers… in fact, almost all of them are boulders that are at least a foot thick. Many of the rocks are even larger… as we gained experience we realized that as long as a rock had one flat side and an interesting surface, it probably was a good candidate for the path. 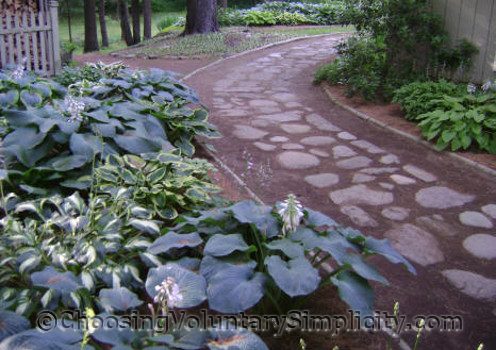 Before we began, we had no idea of what we were getting ourselves into, and that is probably a good thing. We tried to keep the project manageable by building the path in eight to ten foot segments but still it was a formidable task. We already knew the digging was going to be difficult because of our rocky soil, but we soon found that there were several rocks just beneath the surface of the soil that were heavier than we could pull out, even with the help of the winch. However, the winch COULD raise these rocks up to the level of the path so we could maneuver them into position with the flat side up. This meant we had to dig deep to get under the rock… most of the path was dug more than two feet deep, but in these areas we had to go even deeper. We would stand in the nearly hip deep “hole” working as fast as we could to pack dirt under these bigger rocks while they were being held in place by the winch… all the while hoping the winch would hold and the rock wouldn’t shift until we had it stabilized. We dug and we packed dirt and we moved rocks… week after week. It was hard, slow work, but we finally reached the porch steps and the end of the path. It was done!

A few weeks later, my husband and I were outside working in one of the gardens when a large landscaping truck stopped in the road in front of our house. The driver walked over to us and started to ask for directions to the house he was trying to find but he kept looking towards the path and moving nearer and nearer to it as he talked. Eventually he got around to introducing himself as a landscaper who specializes in stone work and asked if he could look at the path more closely. When my husband told him to go ahead, the man walked back and forth along the length of the path several times, a couple of times kneeling down to look at some of the stones more closely.

He said we had a beautiful path and that he was especially impressed with the quality of the workmanship. And then he asked if we would mind telling him which of his competitors had done the work and what they had charged.

My husband told him that we had built the path ourselves… out of boulders… and that the only cost was some very hard work and a lot of our time. The man couldn’t seem to understand how the “pavers” could actually be the flat sides of large boulders until my husband showed him how deeply one was embedded in the ground. We were stunned when the man said his company would charge several thousand dollars to build a comparable path.

That was fourteen summers ago and despite our inexperience in path building we seem to have done something right. All of the rocks have stayed perfectly in place with none of the frost heaving or sinking we expected to see. We thought we might have a problem with drainage because the path only has a soil base, but any rain soaks into the ground quickly and we have never had water collecting or ice on the path.

We talk sometimes about building another stone path in front of our house. This one would start at the front porch steps and curve all the way across a large expanse of lawn to the other gate. I don’t even want to think about how long this path would be! So far, we have no definite plans… although we do keep adding any appropriate rocks to the special pile of “path rocks” we have set aside for that eventuality.

All I can say is – WOW!!! You guys do such awesome stuff. I would love a path like this but I can’t imagine all the work. Great job on the path and wonderful blog. Keep up the good work.

That is way beautiful.

Great post, very inspiring. You must be very proud of what you have done every time you walk on that path. I wish I could tackle projects like that but I’m a renter and the lease is very restrictive. Maybe someday!

That is a beautiful pathway! I can’t imagine how much work it would take to implant those boulders in the path. If only my yard had natural stone! I have to import.

That is a gorgeous path…Just beautiful. And for a landscaping company telling you how good the workmanship is must have made all your hard work worthwhile…Lisa

Hats off to the both of ya! I can’t even imagine all the hard work that must’ve gone into the path. I am thinking of making a similar one in my garden with our tile remnants. One doubt – I can see the stones in the middle of the path, is the rest concrete?

It is lovely and I have an area where I’d love something like that. I suppose the hugeness of the rocks helped you with the frost heaving issues. What a nice secondary benefit…and you don’t have to pay to dispose of the rocks. My soil is also very rocky. I have some of the boulders as accent rocks in my flower beds now. Don’t you love it when you get a new plant and when you go to put the shovel in the ground you hear CLINK only to find a huge rock underneath.

One question. How do you keep the weeds out of the path if it’s soil based? In fact, I don’t see a weed in sight.

We’ve done a little of this type of work ourselves. It is very hard work. It looks like you did an awesome job.

Karthi, no, that’s packed soil around the stones… not concrete.

Sandy, yes, I know only too well that CLINK of a rock when we’re trying to dig even the smallest hole! About keeping the soil weed-free… we just pull any stray weed as it comes up. There were more weeds in the first year or so, but now there is just a weed now and then, so it isn’t a problem.

You feel the way I feel about nature, the birds and respect for the world out our back doors. I too relish in all these things. We are drawn to nature because we are one with Nature, God has made us this way. I take my hats off to you two for your convictions and keeping things simple. I truly believe if more people realized what they have right out their own back doors, the world would be a more beautiful place to live. God Bless you and your family!

I love the description of how the landscaper kept edging closer to the path – like he was mesmerized by it! he probably was too, it’s lovely work and now I know how hard it was, I’m that much more impressed!

This is one of the most beautiful things I’ve seen added to a yard. I emailed it to several family and friends. After reading the story, I keep thinking you must feel just WONDERFUL every time you look at it, (1) seeing your own handiwork, and then (2) realizing it didn’t cost thousands of dollars to have it built? I imagine you enjoy it MUCH more than if you’d paid someone else to build it for you.

This is truly amazing. I am so impressed, not just by the quality of the work but the dedication to having something authentic. This is how they did it many many years ago and why it lasts centuries. Just beautiful!

Faith can move mountains. Shirley and her husband move large boulders and immense tree stumps. That path is absolutely stunning and a wonderful testament to what hard work and simplicity can do. *bless*

Awesome work. Now I have a purpose and mission for the “pile” I’ve accumulated for years. This is akin to the way roads in China used to be built. Much appreciate the comments as well. Cheers!

This is a great article. My wife and I have done projects like this. It is funny how complicated the so called “experts” can make a project sound when they are trying to sell it to you. Like most things in life, it comes down to simple hard work and determination.