Two hundred and thirty-eight years ago, on May 19, 1780, an area of New England as far south as New Jersey and as far north as Maine experienced an event that has come to be known as “New England’s Dark Day.” The sky had been a strange yellowish-red color for several days, but before noontime on that day it had become as dark as early evening. Farm animals reacted as if night were approaching… chickens went to roost and cattle came back from grazing to be milked. It was too dark for any outdoor activities, and many people gathered in panicked groups, fearing that perhaps the world was coming to an end.

Today scientists would look at satellite photographs, consult their computer models of wind patterns, and gather information from all over the area in minutes, but in 1780, no one knew what was happening or why, and people were terrified. Present-day researchers think that the intense darkness was caused by distant wildfires and the resulting high concentration of ash particles in the atmosphere. This theory is supported by accounts of that day in diaries and letters of the time, which describe rain from the day before as thick and black with a sooty odor. 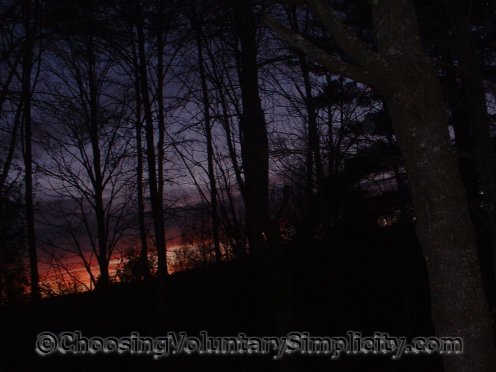 I have always had a personal interest in New England’s Dark Day because one of my ancestors was living in northeastern Massachusetts at the time… one of the areas where the darkness was the most intense… and I have read his brief but poignant description of this day in his diary.

He called it the DARK DAY. The capitals are his.

This is fascinating info. I live in New England (Boston) but I had never heard about this before. It must have been frightning for the people who experienced it.

I can only imagine what this must have been like. A couple of years ago we had a dark day here although not nearly as serious as the one in 1780. There was a bad wildfire north of us and it was almost dark during the morning hours. We knew why but it was still very eerie.

Cool story! I had never heard of this. The thing is, even with all our advanced technology and satellite imagery, if this dark day would have happened today, we would still be scared! We’d know there was no reason to be, but we would be, I think.

Living in SoCal, land of huge fires, we experience all too frequent ‘dark days’. I can only imagine how scary it would be to not know why it was dark at midday!

I’ve heard the story of the Dark Day somewhere before. I think it’s awesome, though, that you have a diary of the time period. In my family, people tend to have them burned just before or after they pass away.

That’s neat that you have your ancestor’s record of it.
I remeber hearing about this story before, thanks for posting.
There was also a day when the stars fell from the sky…I believe in 1833.

I have been fascinated with the New England’s Dark Day since I read about it many years ago. I too have an ancestor story, though it is not much of a story per se. My grandfather told me that a female ancestress of his was out with a horse that day and the horse found its way home in the darkness much to her relief. It seems strange that a woman was off somewhere riding a horse, but maybe she was a midwife or attending an ill family member. Unfortunately, this was an incident that was orally passed down and I don’t even know the name of the woman. Author C.A. Stephens wrote a short story based on his ancestor’s experience that strange day in his book “My Folks in Maine”. Incidentally, if you want to know what it was like to live in Maine mostly in the 1800s, his “Old Squire” stories, quasi-autobiographical are excellent.