It is surprisingly easy to identify a tree frog (Hyla versicolor) because of their large toe pads. These sticky toe pads and their flexible toe tips allow them to grasp and climb, even on smooth surfaces. Tree frogs have very rough skin and warts like a toad, although not as many. Their body color ranges from dark brown to silvery gray with green highlights and they have a bright yellow orange area on the inside of their upper back legs. They also have numerous black splotches on their backs and a few black speckles over the rest of their body.

Tree frogs are small, from one to two inches long, and they are almost never seen on the ground. Here they seem to stay mostly in the trees near our small pond. On warm spring nights when the temperature is around 60 degrees, the male tree frogs “sing” to attract the females. Their song is a repeated loud trill that sounds more like birds than frogs. The female lays egg masses that break into smaller clusters of eggs in the water, and these eggs hatch in three to seven days depending on temperature. We have noticed that the tree frog tadpoles have a rounder body and a wider tail than other tadpoles. They become perfectly formed tiny frogs within a couple of months. 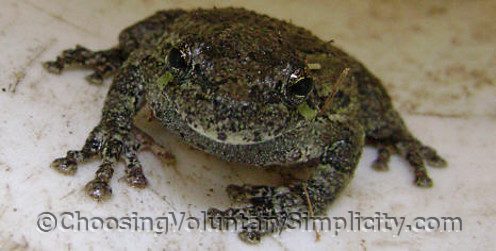 We probably have a lot of tree frogs here if the volume of their “trills” is any indication… but they are nocturnal and so reclusive we almost never see them. So when a tree frog jumped from a tree and landed right beside my husband’s gloved hand as he was weeding, it was an interesting opportunity for some photographs. 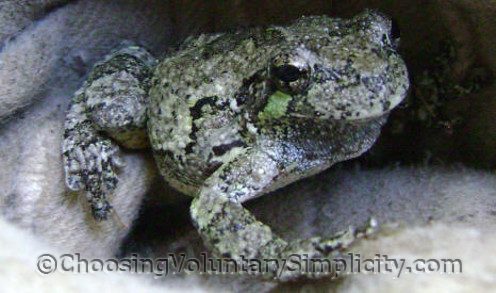 This type of tree frog is able to change color according to temperature and their surroundings. When we first saw the frog in these photographs, he was almost the same dark brown as the tree he had jumped from. After trying to jump out of my husband’s gloved hand for several minutes as we tried to get a focused picture, the frog’s color gradually changed to a whitish gray color that almost exactly matched my husband’s dirt-covered work glove. The spot under the frog’s eyes also became very green.

During winter tree frogs hibernate on the ground under leaves, bark, or roots. Their breathing and heart beat actually stop, but they have such a high level of glycerol in their blood, it prevents ice crystals from forming in their cells. According to some sources, up to eighty percent of a tree frog’s body actually freezes and their eyes become opaque, but because ice crystals do not form and burst the cells, the frog is able to survive the freezing temperatures and thaw out again in the spring.

A few days after the adult tree frog paid us a visit, my husband noticed a tiny baby tree frog under a piece of dark bark that had fallen near the pond. This tiny frog was literally the size of a green pea, but it already had large transparent toe pads and warts on its back. It changed color from the dark brown of the bark to the lighter golden brown of the pine needles it hid in as we tried to get a picture of it. It did not help that this tiny frog was already a great climber and a high jumper and definitely did not want to pose for pictures!

Is It Possible To Have a Soy-Free Traditional Thanksgiving Dinner?

It Has Been Quite a Morning

Beautiful! It’s amazing that you guys can enjoy so much nature every day. Maybe the city is not where I belong.

I love frogs and toads. Not only for their beauty (well, I think they are beautiful) but also because they are like the canary in the coal mine. Healthy toads and frogs are a good sign of a healthy environment.
Not to mention all those pesky insects they eat.

Without them we would have a silent spring.

We live in Washington, DC, right in the city. We have had gray tree frogs in our yard for years, and hearing them for the first time is one of my favorite parts of spring.

Sadly, however, we have not had any this year or last year. The winter before last was exceedingly cold and snowy for our area, and I am wondering whether they just didn’t make it.

I miss their trilling tremendously.

I was surprised when I began to hear the tree frogs along our small creek in the Shenandoah Valley around March 11 this year (2015). It seemed so early after our cold winter and having had 8 inches of snow the week before. When do others find that the tree frogs emerge?