Did My Siberian Squill Survive?

I found this siberian squill last spring when mud season was at its worst and the road past our house was an absolute mess. We were trying to see if we could do something to fix an especially deep mud hole when my eye was caught by something brilliantly blue at the side of the road. That something turned out to be a small patch of squill flowers. I have no idea where they came from because my mother never grew them, and I never did, and there are no other houses anywhere near. Perhaps the bulbs were in some of the sand the road crew kept dumping in that area? Or maybe the bulbs were left somewhere near by birds or some other wild animals? 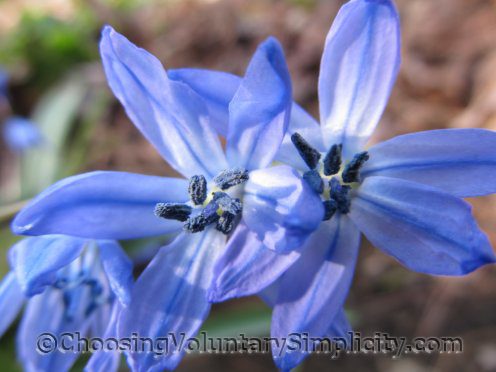 The flowers were just too pretty to leave there in the mud to be dug up by the grader the next time it went through. I moved the entire clump to a safer spot under one of our plum trees, and more and more flowers kept appearing for at least the next couple of weeks.

I wonder if the bulbs survived the extended cold temperatures we have had this winter. Hopefully I will find out soon…

So pretty!!! Such a nice blue. I have a few of these I think although they might be glory of the snow. I never can tell these two apart. Hope yours survive.

The major casualty at our house is our best apple tree. The snow was so deep the deer managed to reach some of the higher branches and 5 are eaten off on one side of the tree. This is the tree that gives us the most apples and it is so disappointing. I’m a regular reader and enjoy your blog so much.